PM to Lloyd Austin: Your Visit is Strong Message that US Supports Georgia’s Sovereignty, Territorial Integrity 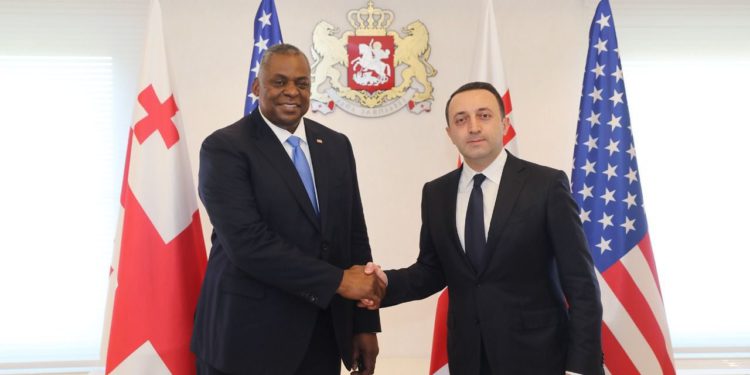 “Your visit is a strong message that the US supports Georgia’s territorial integrity and sovereignty,” Georgian Prime Minister Irakli Garibashvili said at yesterday’s meeting with US Secretary of Defense Lloyd Austin.

The Head of Government thanked the US Secretary of Defense for his visit and pointed out that it is another demonstration of the high-level relations between Georgia and the US, one that underlines the continuous interest and engagement of the United States of America in the Black Sea and South Caucasus region.

The Secretary of Defense thanked the Prime Minister for warm welcome and added that his visit to Georgia bears witness to the close partnership between the US and Georgia. 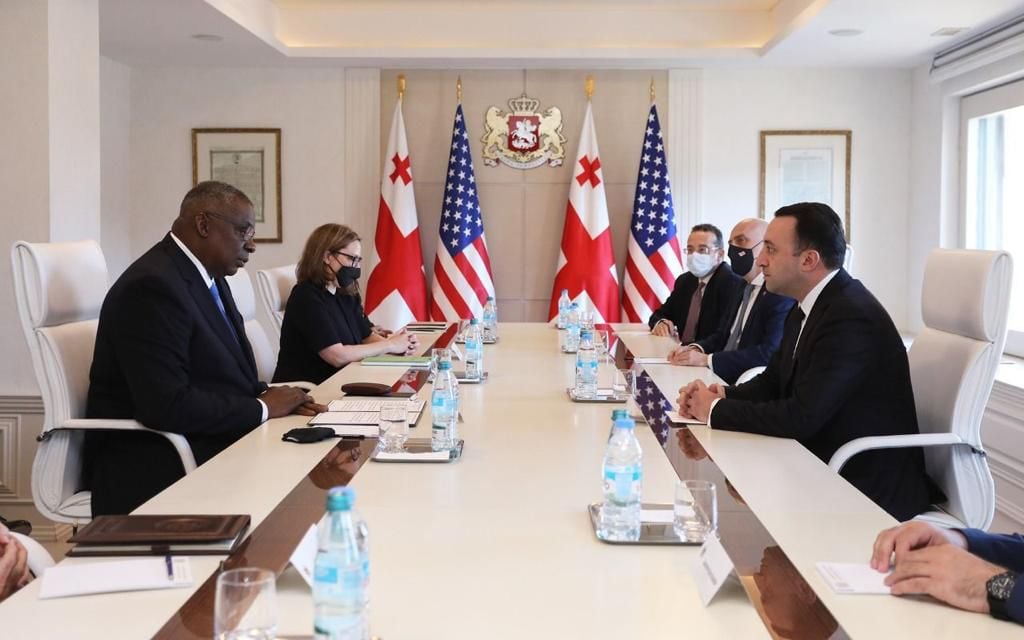 “Thank you, Mister Prime Minister. This is my first visit to Georgia, and I am very grateful for the warm welcome that I have received thus far. And it has been a really good visit. Glad to be here to underscore the close partnership between our two countries. It is a partnership that is based on common interests and shared values. As it has been demonstrated over the years through our shared sacrifices in Afghanistan and elsewhere, Georgia has consistently and steadfastly supported the United States in promoting peace and stability. I am very grateful for close cooperation and for having an opportunity to reaffirm the US support for Georgia’s sovereignty and territorial integrity.

“One point I would like to be clear on is, if you do not mind, Mister Prime Minister, that the United States condemns Russia’s ongoing occupation of Georgia and its attempts to expand influence over the Black Sea Region through various military and other activities. This is an important region, and its security and stability are crucial for fully realizing the vision that we share of a Europe that is whole and free, and at peace. Thank you again! The United States is committed to sustaining this strategic partnership. It is great to be here,” Lloyd Austin said.

Irakli Garibashvili emphasized that the United States of America has a loyal regional ally in Georgia. The high level of bilateral cooperation in the areas of defense and security was singled out. The parties underscored that the ongoing modernization of Georgia’s Defense Forces is a result of joint US-Georgia efforts, while the memorandum signed today between the defense authorities of Georgia and the US are of vital importance in that, given the complex security environment, it is important for Georgia to continue developing its territorial defense capabilities.

The meeting paid special attention to the regional situation and Russia’s aggressive behavior. The US Secretary of Defense reassured the Prime Minister of Georgia of the US firm support for Georgia’s territorial integrity and sovereignty within its internationally recognized borders.

Irakli Garibashvili underscored the importance of restoring peace and trust in the region. In this context, the recent agreement between Azerbaijan and Armenia-achieved through close cooperation with the US and the Georgian Prime Minister’s mediation-was singled out as a factor facilitating dialogue and improving the region’s security environment. The Head of Georgian Government introduced the US Secretary of Defense to the Peaceful Neighborhood Initiative for the South Caucasus initiated by Irakli Garibashvili in order to secure peace and stability in the region, also drawing his attention to the special importance of US support in this process.

Georgia’s considerable progress toward European and Euro-Atlantic integration was commended. The conversation also touched on the upcoming NATO Summit as a good opportunity to recognize Georgia’s progress. The parties pointed out the decisive importance of US engagement in reaching a consensus among the Allies. Special emphasis was placed on Georgia’s contribution to ensuring international security and the country’s formidable role in the process of evacuation from Afghanistan, something praised by the US Secretary of Defense as another demonstration of the strong strategic partnership between the two countries and their commitment to shared values, reported the Press Service of the Government Administration.

US Secretary of Defense Lloyd Austin arrived in Georgia on October 18.

Related Story: US Secretary of Defense: My Visit to Georgia Serves to Reassure and Recognize Partnership