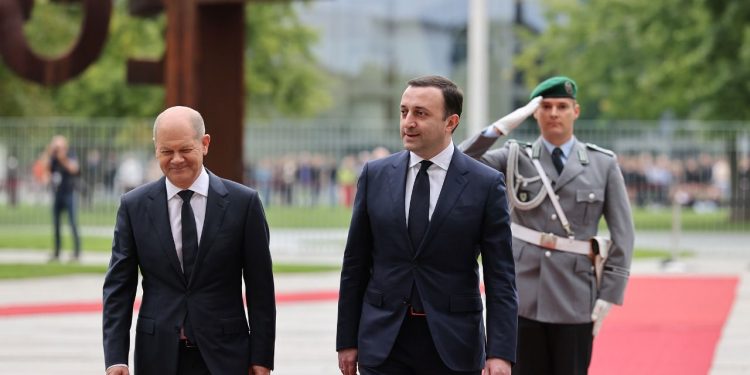 After an official welcoming ceremony, Georgian Prime Minister Irakli Garibashvili and the Chancellor of the Federal Republic of Germany, Olaf Scholz, held a face-to-face meeting, followed by an expanded meeting, in Berlin.

Close Georgia-Germany partnership, the region’s security environment, the European perspective granted to Georgia, and the trade and economic relations between the two countries were the key issues discussed by Garibashvili and Scholz.

At the meeting, the parties underlined the close partnership between Georgia and Germany, expressing readiness to channel efforts toward further developing strategic cooperation.

At the meeting, the parties overviewed regional and global challenges. The conversation touched on Russia’s military aggression against Ukraine, also reiterating the importance of the international community’s efforts toward deescalating the situation and ensuring peace.

The Prime Minister of Georgia emphasized the occupation of Georgia’s territories by Russia, the military aggression of 2008, and the illegal actions by the Russian Federation, which deepen the vulnerability of the security environment on the ground.

In light of the foregoing, the special importance of support from Germany was pointed out, in terms of both Georgia’s sovereignty and territorial integrity and the process of peaceful resolution of the Russia-Georgia conflict. Germany’s exceptional contribution to the Monitoring Mission in Georgia was highlighted.

At the meeting, the parties also discussed the European Council’s decision to grant the European perspective to Georgia, and its importance. Garibashvili thanked his German colleague for supporting this historic decision and for Germany’s political and practical assistance to Georgia in the process of European integration. In light of regional and global challenges, special attention was paid to the support of Western partners for Georgia and the Associated Trio countries.

The Prime Minister underscored the special significance of the European perspective and the process of EU integration, and its importance to Georgia, also pointing out that the country is treating this process with enormous responsibility. In this context, attention was paid to the implementation of the European Council’s recommendations, steps taken so far, and the relevant action plan. It was noted that inclusive work is underway with engagement from the Parliament, the Government, opposition parties, and civil society.

At the meeting, Georgia’s important role in ensuring regional security was also emphasized, which is especially important for the region’s sustainable and stable development. Against the backdrop of the armed confrontation between the Republic of Azerbaijan and Armenia, Georgia’s successful mediation and the special importance of the Prime Minister’s peace initiative for the South Caucasus were reiterated.

At the meeting, gratitude was once again expressed for Georgia’s contribution to ensuring Euro-Atlantic security, with emphasis on the exceptionally successful cooperation in this process with the German side under the Alliance’s missions.

While discussing the bilateral relations between Georgia and Germany, issues pertaining to cooperation across a variety of sphere were considered. It was noted that Germany is one of Georgia’s top trade and economic partners. The parties expressed readiness to direct additional efforts toward tapping into the full potential of trade and economic ties. In this context, special emphasis was placed on Georgia’s growing role for the EU as a transit hub linking Asia and Europe and on the importance of the Middle Corridor as a multimodal transport corridor with great potential.

In this context, the Prime Minister expressed readiness to collaborate with German transport and logistics companies.

The parties welcomed Georgia’s upcoming participation as Host Country at ITB Berlin, the world’s largest tourism trade fair, in 2003, which will help promote Georgia not only in Germany, but across Europe, and highlight the country’s tourism potential.

The parties welcomed the close friendly people-to-people ties between the countries and expressed hope that the comprehensive memorandum signed between the Governments of the two countries in the area of culture will help Georgians and Germans and representatives of the artistic and scientific spheres draw closer.

Garibashvili invited Scholz to pay a reciprocal visit to Georgia at his convenience.

After the meeting, the Georgian Prime and the Chancellor of the Federal Republic of Germany, Scholz, held a joint press conference.