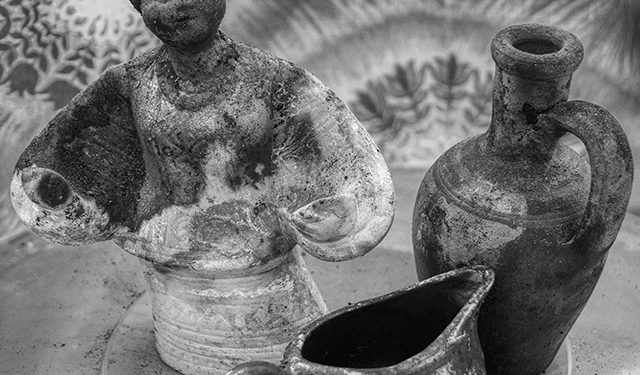 It has now been 10 days since The Garage Fire which was the subject of my last week’s article. A time of ups and downs.

It took me this long to remember something specific which was in the fire, something which no amount of money can replace, unlike everything else which burned to ashes and atoms. Lying awake at 6 this morning, I had to consider other possible locations for this thing, reject them, and finally let the grief wash over me. Then decided to move on, as a process. It took a while. I had been making a list of the other losses, all of which could be bought back, because they were all mass-produced items.
I thought back to an apartment move which my friends in St Petersburg, Russia, made while I was away in Canada for a few months. They took my belongings, which I had already packed up in anticipation, and welcomed me with delight upon my return.

The new place being much larger than the old, and I began rummaging through the things to find my own set of belongings, somewhat scattered as we had upsized from 4 young men to 10.
I found everything except, except… that which was most precious to me at the time. Not the container, which was just a canvas shopping bag on two wheels with a pullout handle: Its contents. All of my photographic negatives, slides and some prints from the previous 10 years or so.

As that new apartment was also being renovated as my friends moved in, I imagine that one of the workmen liked the look of my very convenient wheeled shopping bag, and walked off with it. The materials inside? Worthless to him, likely dumped out. Gone forever to me, though. That gradual realization was very hard, and I almost left what I thought was a calling from God to serve people in some capacity overseas. My “children,” product of all my creativity, all stolen from me and scattered to the winds! Eventually, I worked through it and moved on, but it took time and determination. And prayer.

The young people’s volunteer group were a huge help to my wife and me this last week after the fire. Before snow returned, we had to categorize everything left in the garage. Scrap metal to sell; salvageable tools or parts; garbage; salvageable wood to burn in the stove; roof sheeting, now blackened but still useable to cover things with. Then they helped me take it all to new locations: barn, dumpsters, house.

That kept me busy for quite a few days, and we all got blackened from head to toe with the whole messy business. And we bonded very closely, as well. Leaving, they cooked a “last supper” to share with us. After this they presented us with a spiral-bound book, titled “Beauty from Ashes”, Inside, along with restored pieces of some of my old postcards and other photographs, were handwritten letters from every team member about how special their time through our crisis had been. It touched us deeply.

Now, that team has gone and another one come, for nearly a month. After their first night in the house, the early morning brought the memory of a nice large plastic storage box with a secure lid, safe from the small mice which had been known to inhabit the garage. Inside… all the next 25 years’ archive of my photographic negatives, slides, photograms and black and white prints. The negs and slides I had scanned for the most part, but these were the originals. The photograms and prints were unique and irrecoverable.

So here I am again, at the same crossroads as in the early 1990s in Russia, facing the same terrible loss. My reactions remain the same. Go through the grief, don’t bury or try to ignore it. Then pray for the strength and faith to move on. I do this, letting it take the time it needs, and am through, out the other side, at least for now. The few burnt ceramic things in my photograph will stand in for the actual irreplaceables.

It could still have been so much worse!