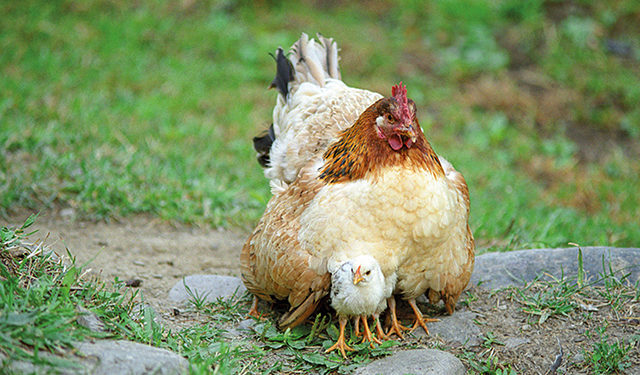 Having poultry (and, earlier, alongside them, cows) was a first for me when we moved from Tbilisi to Etseri. Not for my farm-raised wife, of course. But I had a lot to learn about working with these birds.
What do they eat? Seeds such as corn or wheat; grasses and other plants; insects and worms. The seeds are all that is available to them in winter, given morning and evening; except winter, a smaller amount of corn in the morning, thrown outside to encourage them out, and they’re good to go. They also need a source of water, in the barn in winter, and local streams otherwise. Preferred environment is, of course, under the open sky. In winter with its deep snows, they won’t venture out of the barn, but once the white is going and gone, they would rather spend most of their day outside. They will scratch the bare soil and then turn on it to see if a worm has appeared. Or, if I am hoeing near the barn, they seek worms in the newly exposed earth. But we discourage them from venturing into our raspberry canes or herbs at the other end of the property, with fences high enough that they can’t get over them.

They are a flock animal, like many birds, and prefer to stay together. Predators include foxes, large enough raptor birds, and sometimes a naughty dog, which should be punished (or its owner should, for letting it loose if it’s going to behave thus off home soil!). Domestic cats are not much of a threat.

Stopping the predators from entering the barn, while allowing the chickens to come and go, is only half the battle. During the day, beyond winter, they are outside and thus more vulnerable. Each of my neighbors has a rifle, mostly for shooting raptors out of the sky, unfortunately. The chickens also sometimes get into other people’s nearby fields, and can wreak minor havoc on their shallow potatoes!

The best numbers of roosters to have in your little flock are either none (if you don’t want fertilized eggs) or one. If you have two, one will dominate the other in fights. The same can happen, as I discovered, if your one rooster isn’t as strong as that of a neighbor, which can exploit this weakness and make the home boy’s life hell. I had to lure the invader into the barn, enter and shut it behind me, then he led me on a merry chase until I finally caught him and gave him back to his owners with a firm request to keep him away from my hens! Rinse, repeat, until at last they were able to imprison him long enough to break this bad habit.

If you provide the right conditions, the hens will of course lay an egg every two days. Here, some psychology is needed to work with their instincts. A sheltered place in the barn with a bit of hay, not out in the open; a box a couple of times larger than a shoebox, say. They start laying once winter is on the retreat and things are warming up. You can take the eggs, and store them in a cool place, but leave the last one to encourage further laying. When you have 12 or so, if you like you can return them to the hen, and she will sit on them to hatch them after about three weeks.

Where the trouble starts is in multiple hens laying their eggs in one place, despite your best efforts to give each her own nice box. Then, if two or more get into brooding mode at the same time, a strong instinct, they will start fighting over that place, and destruction (of the eggs) ensues.

Once they have hatched, you may have to help the chicks down if they were in a box or off the ground, and settle them on the ground. They will eat crumbled unsalted cheese for a few days, then wheat seeds.

The hen will imprint them to herself by her presence and the unique clucks she makes so that they will get used to only her voice. The sweetest thing in the world is to see a hen with a chick or two or more peeking out from under her wing, as sheltered as can be. She takes them outside as soon as it’s warm enough, to teach them how to be themselves.

Rain, outside, can be quite a threat to the new chicks. It can make them too cold and wet, or trap them in mud, if they get separated from their mother. They are fragile little things. We did have one, of all the hundreds hatched so far, born with deformed legs and quite unable to walk. The kindest, and indeed only thing for it was a quick death, to save it from a lingering one. And I’ve lost one or two to cold, and a few to raptors. Red in tooth and claw, after all, is Nature.

If a hen is playing up and trying foolishly to hatch only one egg, her brooding instinct may have gone too far, when you may not have other eggs to give her. The apparent cure is to dip her a few times in cold water, and put her under a bucket (of course she must have air!) in a cool place overnight. Drastic, but it seems to work.

Fresh farm eggs for breakfast, along with Svan salt and cheese or toast and Marmite: the breakfast of kings. In an omelet a hundred different ways, anytime. As ingredients in baking, which for me is more science than art, and best left to my wife, who does it so well. We won’t talk here about free-range chicken except to mention that its taste is far superior to that of a poor fat soulless imported battery bird. We’re just trying to live local.