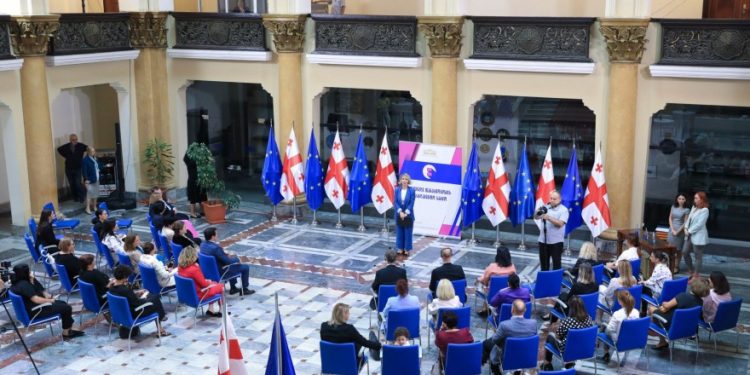 The Permanent Parliamentary Gender Equality Council awarded the winners of the competition held to recognize the contribution to gender equality and women’s empowerment.

Awards for their contribution to gender equality and women’s empowerment were given to Iulia Kharashvili, the founder and chair of the IDP Women Association “Consent”, Gogi Revia, the head of the social protection and gender equality department of Zugdidi Municipality’s social and healthcare service, and H.E. Ulrik Tideström, the Ambassador of the Kingdom of Sweden to Georgia.

The event was opened by the Chair of the Council, Nino Tsilosani, who addressed the participants with a welcome speech.

“To celebrate the contribution provided to gender equality and women’s empowerment, the Permanent Parliamentary Gender Equality Council has this year announced an open competition for the first time. The annual award’s principal message is to increase awareness of the importance of attaining gender equality and to recognize the accomplishments of those who take an active role in efforts in this direction,” Tsilosani noted.

As she remarkes, this initiative lays the foundation for the tradition, which involves expressing special thanks to the winners of the competition every year for their contribution to gender equality and women’s empowerment.

The Vice-Speaker also noted that Georgia and the Kingdom of Sweden have a long, close and exemplary friendship.

“It should be emphasized that the Ambassador has greatly aided bilateral ties and is a crucial ally and supporter of the Gender Equality Council. He works hard to advance women’s rights and gender equality across the board in our nation,” Talakvadze said while introducing the Ambassador.

Commemorative gifts were given to the competition candidates on behalf of the Council.

Candidates for the competition held to recognize the contribution to gender equality and women’s empowerment may have been nominated by representatives of the civil sector, members of the Parliament’s Gender Equality Council, the Council’s Secretariat, state agencies, and initiative groups.

A special panel made up of members of the Parliament, civic sector representatives, and the public defender chose the winning candidates by evaluating each contender in accordance with predetermined standards.