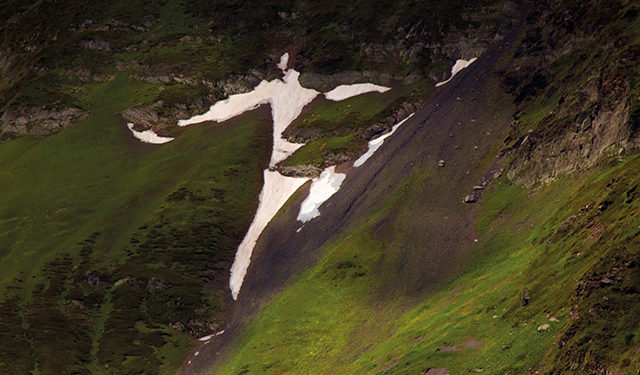 But especially here, or so a potter friend told me on her first visit with her husband, ascending to us in Svaneti from near Tbilisi to teach clay and the wheel to local children some years ago. “Tony, there were faces peering out at me from everywhere in these mountains as we drove up!” she said. “The patterns of snow on the mountains,” (they usually came in winter), “the rock formations, the shadows as the sunlight changes… It’s no wonder these people have animism as part of their religious outlook!” I could hardly agree more.

The word for seeing faces and other familiar things in unexpected places in nature is pareidolia, from the Greek para (beside or beyond) and eidolia (form or image, with the word “idol” found nicely inside this word too). I am quite susceptible to it, and have noticed several prominent seasonally recurring figures guarding or watching over us as we have spent most of the last eight years in the village of Etseri. It in turn is a subset of the word apophenia, also of Greek roots, meaning the tendency of people to see patterns in random structures. Another foible of mine, which I count as a strength and source of endless amusement.

To the north of us are two huge mountainside faces, one of an old man, below that another of a mandrill or baboon. This pair are prominent in late winter and early spring, being made of snow. Opposite them, on another nearly vertical mountain face to the south, is a whole gigantic human figure, appearing much later, July, with the last of the melting snow on that less-sunstruck slope. He appears to be dancing, with one leg up and arms outstretched, and also holding a banner or flag, which is blowing back in the wind and partly covering his torso. This figure has the most amazing story connected with it, which my close friend in the village recounted for me as soon as I showed him my photo of it.

Local people see a cross shape in the figure’s limbs and head of snow, and believed that whichever part of this cross stayed unmelted the longest, the place it was pointing to would have the best fortune in the coming year. The locations represented were the villages above and below Etseri (left and right arms), those in faraway Lentekhi (the head) and us, the downward-pointing leg.

Apparently, though, people here were not content to leave things to the gods or forces of nature, even though “our” part is usually the latest to melt. Oh, no! They would climb up there and hack away at the opposing parts, speeding up their disappearance in order to bolster our good fortune. That says a lot about how the worldview here works! Hearing it for the first time has also greatly enriched my understanding of local lore, and set me to wondering what other beliefs and ideas are wrapped up in the creatures which look across at or down on us from on high at certain parts of the year. A single orbit of our sun has many observances, rituals and annual events, especially in places still closely tied to the land and weather, and the ones which belong to Svaneti have a particular fascination to this late dweller.

From July 6 to 15 this year, I took a series of zoomed-in photos of this figure as it shrinks from its main form to nearly gone in the growing summer warmth, and then superimposed and lined up some of these to show the disappearance of the snow delineating in different shades. I still prefer my view of it as a dancing banner-bearer than the harbinger of good or bad fortune, but these are old legends and beliefs, even if not much practiced nowadays. I am glad to know more of them, which help me grow in my knowledge of Svan history, anthropology and culture.