Papuashvili: At Crimea Platform, We will Have Opportunity for Delegations of Parliaments to Express Solidarity with Ukraine 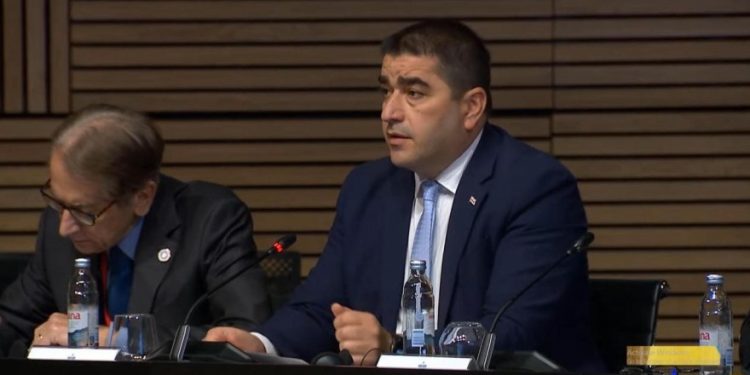 The speaker of the parliament, Shalva Papuashvili made a speech Summit of the International Crimea Platform voicing solidarity to Ukraine.

I am glad, even if with heavy heart, to speak to you at the first Parliamentary Summit of the International Crimea Platform among like-minded friends and partners of Ukraine in the period of the most difficult security challenges of modern times.

On February 24, the Ukrainian people woke up under the rain of rockets. This may have caught many people in the West by surprise. But unfortunately, we, Georgians, Moldovans, Ukrainians, have known this all too well for many years now. Georgian people experienced this ruthless invasion in 2008, which is well known, but also in the early 1990s in Abkhazia and Tskhinvali region.

We have seen Russian tanks raiding Georgian villages and Russian airplanes bombing our hopes for the better future. We have witnessed hundreds of thousands of people expelled from the homes of their ancestors, escaping the massacre and ethnic cleansing, and finding shelter for their children and loved ones inside the cold walls for many months and years.

There is only one answer from us, which is the same answer we had to Russian invasion in Georgia: we strongly condemn Russia’s invasion of Ukraine and illegal annexations of its regions.

Russia must recognize Ukraine’s territorial integrity; must withdraw from the occupied territories; and must respect Ukraine’s independence.

Ladies and gentlemen, our experience of the invasions of 2008 and the 1990s provides us with at least three lessons: First, documenting all crimes of the aggression is key in serving justice and curtailing any temptation for others for similar aggression, no matter being part of the Rome Statute or not. Georgia co-authored the application to investigate Russia’s activities in Ukraine to the International Criminal Court. Winning the legal battle matters in the long run. Second, maintaining unity and solidarity of international community matters until the territorial integrity of Ukraine, and of others similarly violated by Russia, is fully restored. Otherwise, Russia will not stop its military adventurism in its neighborhood and beyond. We voiced our solidarity to Ukraine in all major international organisations, and will continue to do so in future. Georgia also will not allow using Georgia’s territory and financial system to ease the effect of, undermine or avoid the existing international sanctions imposed after February 24.

And third, the international community must insist on upholding the fundamental principles of international law. Violating the principle of territorial integrity by force is unacceptable and may only lead to the undermining of the international order. We have seen that neglect of aggression in the past has generated new tremors in the international system, which are more difficult to deal with now than in their early stages.

Ladies and gentlemen, Georgia’s support to Ukraine is unconditional and timeless. We stand by the Ukrainian people, despite the fact that Georgia itself is under the existential threat as our own historic regions have been long occupied by Russia. We will not swerve from this commitment in the name of both Georgian and Ukrainian peoples.

I wish Ukraine strength and victory in this epic fight for freedom and independence. Georgian people and government will always be with you.