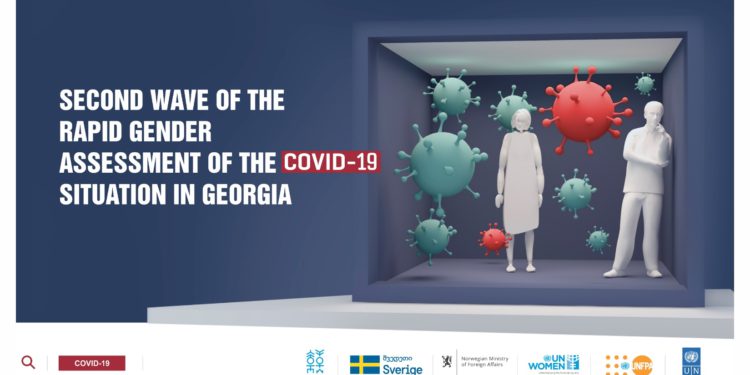 “As Georgia is seeking to recover from the crisis and build a more sustainable and equal society, it is important to look into every aspect of this global and national emergency and assess how it affected equality, inclusive growth and social justice.” – UN Resident Coordinator Sabine Machl

Restrictions imposed to halt the COVID-19 pandemic in Georgia cost jobs, slashed incomes and undermined mental health. There are also signs of an increase in domestic violence. But the impact was differentiated and varied by location, occupation, ethnicity and gender. To understand the differences, three United Nations agencies conducted a Rapid Gender Assessment of the COVID-19 situation, in partnership with Sweden and Norway.

“As Georgia is seeking to recover from the crisis and build a more sustainable and equal society, it is important to look into every aspect of this global and national emergency and assess how it affected equality, inclusive growth and social justice,” said UN Resident Coordinator Sabine Machl.

“The pandemic has prompted extraordinary decisions within politics, the public sector and the business community. The decisions affect everyone but are mostly shaped by men. As we strive to build back better, it is more important than ever to increase women’s political participation and representation in decision making,” said Ulrik Tideström, Ambassador of Sweden to Georgia.

Initiated by the United Nations Development Program (UNDP), the UN Population Fund (UNFPA) and UN Women, and carried out in October 2020 by the research agency CRRC-Georgia, the research builds on the results of a similar survey conducted in May, aiming to understand the lasting effects of the pandemic and inform a gender-sensitive response.

The two surveys reflect two very different phases of the pandemic. The first survey was conducted while strict restrictions on travel and commerce were in force but while COVID-19 prevalence remained low and fatalities were still in single digits. By contrast, the second survey, conducted in October 2020, took place after most social and economic restrictions had been relaxed but while the number of cases and deaths was soaring. This was reflected in the data: in October, 13 percent reported that a household member had fallen ill from COVID-19, up 9 percentage points from the earlier survey.

Members of national minorities were three times more likely than ethnic Georgians to have lost their jobs.

Notably, 42 percent of respondents reported receiving government financial aid in October, a remarkable 35 percentage-point increase from the May survey. An additional 13 percent said they had received some form of in-kind assistance.

“The data show the dramatic economic impact of the pandemic in Georgia,” said UNDP Resident Representative Louisa Vinton. “But they also confirm that not everyone was affected equally. Our focus is to support a recovery that protects both lives and livelihoods while addressing the underlying inequalities that the pandemic has exposed or exacerbated.”

One area of concern is the unequal position of women on the labor market: before the pandemic, half of all women were defined as economically inactive (neither employed nor seeking work), whereas only 16 percent of men fit this category. One of the main reasons: the unequal burden of unpaid work shouldered by women in childcare, cooking and cleaning.

Both men and women reported spending more time on domestic tasks and childcare during the pandemic, but this was against a highly unequal starting point. Gender disproportions remained extreme during the pandemic. In the October survey, 47 percent of men said they never cleaned, 43 percent never cooked, and 33 percent never looked after children. This division of roles meant that mothers with small children saw a dramatic increase in workload during school closures.

The pandemic had a negative impact on perceptions of mental health. Nearly half of respondents acknowledged being affected psychologically, but with clear differences by gender: 57 percent of women compared to 40 percent of men.

“Unfortunately, the pandemic has further worsened women’s condition in the country. The disproportionate burden of household care and the closure of schools had a notable impact on women’s physical and psychological health. And women were more likely than men to make ends meet by reducing spending on healthcare. Therefore, the need to support women in emergencies acquires additional significance,” said Lela Bakradze, Head of the UNFPA Georgia Country Office.

The survey also tested perceptions of whether domestic violence had increased in pandemic conditions. Around 20 percent of respondents (23 percent of women and 17 percent of men) said they had sensed such an increase, but experts believe, as in non-pandemic times, that social stigma may lead to significant underreporting of violence against women.

The awareness of existing services for survivors of domestic violence remains low. 40 percent of women are aware of psychological support services and only one in three knows about shelters and crisis centres. Men know little about domestic violence relief services. Awareness is also low among ethnic minorities and people without higher education.

“Violence against women and girls is a shadow pandemic that needs to be addressed in all efforts aimed at the COVID-19 response and recovery,” said UN Women Country Representative a.i. Tamar Sabedashvili.