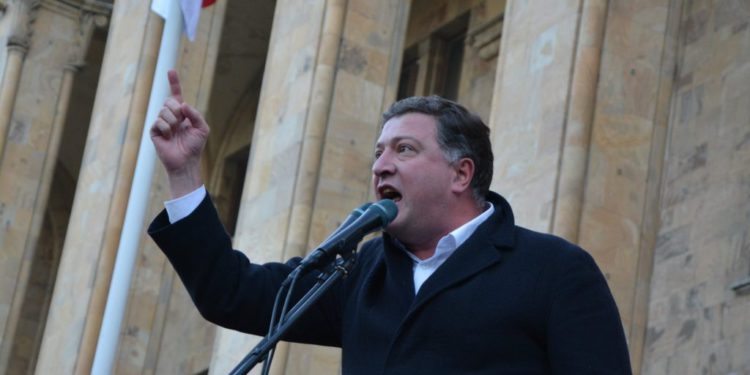 Deputy Minister of Internal Affairs Alexandre Darakhvelidze does not rule out that opposition leader, Poti mayoral candidate Gigi Ugulava will be fined for violating the quarantine rules.

“If he violated the quarantine rules, he will be fined for it,” Darakhvelidze said.

On October 14, Ugulava delivered a speech at the rally in support of the imprisoned third president of Georgia Mikheil Saakashvili. On stage, he said he arrived at the rally on the recommendation of doctors. Ugulava announced on October 7 that he had contracted coronavirus.

“I could not postpone attending this demonstration here today and I want to thank the doctors, they gave me the opportunity to do so,” Gigi Ugulava thus began his speech at Freedom Square, a rally attended by thousands of people.

Later, after the rally, he explained his appearance on social media:

“I no longer have symptoms, I am no longer contagious, the rapid test also showed a negative result and after consulting a doctor I decided to be at the rally with people,” Ugulava noted.

“I urge you, friends, to get vaccinated. It was because of the vaccine that I recovered from the virus so easily. Furthermore, I did not infect those around me, because they were also vaccinated. Please, have a coronavirus vaccine jab!,” he added.

In a response to a journalist’s question regarding how socially responsible was his behavior, Ugulava said that he had already made an explanation publicly and added:

“According to American protocol, in 7-8 days vaccinated people cant go out, I am guided by that and not by the nonsense invented by these swindlers.”

In the protocol of the US Centers for Disease Control and Prevention (CDC), which applies to fully vaccinated individuals, a person must undergo a covid test within 5 days of infection. In case of a negative answer, he/she must wear a face mask in a public space for 14 days.

In addition, Gigi Ugulava’s statement that he is subject to the protocol of the US Centers for Disease Control cannot be considered as an argument due to the fact that the isolation rule was violated in Georgia and local rules apply throughout the country.

In addition, Gigi Ugulava has been vaccinated with the Chinese-made covid vaccine Sinopharm, which is recognized by the CDC only in the case of foreign visitors, and also from November. Consequently, citing the CDC protocol as an argument could not be relevant in this case either.

According to the quarantine and isolation rules in force in Georgia, an asymptomatic patient infected with coronavirus is considered healthy only after 10 days have passed since the confirmation of the virus. According to the rules indicated on the website of the Ministry of Health, such a patient is released from supervision only on the eleventh day and can leave the isolation. The patient’s recovery is confirmed by a family doctor.