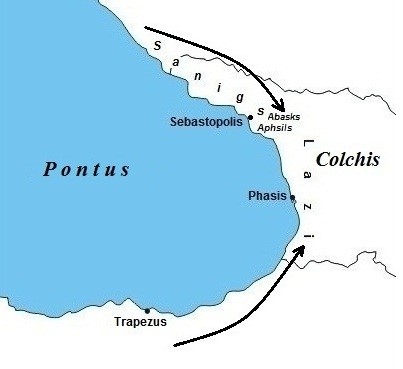 The expulsion and extermination of the Georgians in the Northwest part of Western Georgia (Abkhazia) since 1992 are now accompanied by looting of the remnant population and also by archaeological looting, i.e. the illicit removal of the artefacts from the archaeological sites. The next step is their incorrect interpretation.

We are focused on a silver jug from Gagra district (Abkhazia, Georgia) with a Greek inscription, found in 2005 by the Russian archaeologists and published as A. Vinogradov. King Bacur’s Jug – New Source for Early History of the Caucasus (in Russ.). Interdisciplinary Archaeology. II. Tbilisi. 2013, pp. 45-67.

Burial #5 of necropolis in Achmarda (Gagra district) shows rich inventory inc­lu­ding the silver jug with the Greek inscription (1st -3rd cc. A.D.): I, Pacuros, the king, gave to (my) sheep.

Originally the Persian name, it had several Greek forms. Formula applied here is also very Oriental in essence: king is a shepherd, his subjects – the sheep. The name was popular among the Parthian, Armenian and Iberian (East Georgian) kings.

A. Vinogradov, Russian scholar, who read the inscription, excluding the possibilities, thought of Pacuros as Armenian king Pacorus (161-163) or the Iberian king Bacur (end of the 3rd c. A.D.). Still, he denies the possibility of vassal subordination of those living at Achmarda to either Armenian, or Iberian king because nobody narrates about this status of the Northwest part of Colchis (Western Georgia). He even admits that Pacuros could be Lazi (West Georgian) king, unknown from the records. Indeed, he states, Aphsils and Abasks (supposed ancestors of the Abkhazians. They started their movement from the Caucasian mountains towards Colchis in the 1st c. A.D. and settled on the territory of modern Abkhazia) were sometimes subjugated to the Lazi kings.

For Pacuros being the Lazi king is not a possibility, but reality. He is mentioned in records in the times of Emperor Antoninus Pius (see below), while Aphsils and Abasks were permanent subjects of the Lazi kings https://www.eurasiareview.com/13042020-abkhazians-and-ossetians-in-georgia-a-short-history-analysis/. And moreover, as we shall see further, there were no Aphsils and Abasks at all living in Gagra district in the 2nd c. A.D. Also, Pacuros/Pacorus seems to pave the way for formation of Lazica, centralized Western Georgian kingdom comprising the whole Colchis, in the 3rd c. A.D. This is briefly, now, in details (see T. Dundua. History of Georgia. Tbilisi. 2017, pp. 113-120) https://www.academia.edu/35768659/History_of_Georgia.

Many mountaineer clans moved down to Colchis on the verge of the 1st c. B.C.-1st c. A.D. either from the South (from the neighbouring places of Trapezus), or – from the North. Actually, those from the South, the Lazi, spoke the same Mingrelian (West Georgian) language as the Colchians did. So, no cultural changes took place, and those too, who came from the North, soon made their Abkhazian language a family language having Ming­re­lian as social one.

Beyond the Roman limes (frontier) https://www.eurasiareview.com/22042020-rome-byzantium-and-nato-grand-strategy-of-the-west-and-georgia-analysis/, close to the sea, the following political units existed in Western Georgia towards 131: general direction is that to the North from mouth of the river Chorokhi, near modern Georgian-Turkish border; the list is headed by the Lazi with their king Malassas, next come the Aphsils and their king Iulianos, then – the Abasks and their king Resmagas, finally, the Sanigs (Mingrelian speaking unit) and their king Spadagas. The Sanigs lived around Sebastopolis (Arr. Periplus. 11; modern Sokhumi), and further, till modern Sochi (Arr. Periplus. 18), now in Russian Federation (Plate I).

We have the following picture already for the midst of the same century: only Lazi happen to live beyond the Roman limes at the East Black Sea coast (Ptol. Geogr. V. IX. 5). It could mean only one thing – Lazi coastal kingdom is already present, with other political terms/names having been disappeared in favour of Lazi. The Manrals/Margals (Mingrelians) dwelt in deep hinterland eastward (Plate II).

Thus, Pacuros/Pacorus, the Lazi king, sends silver jug either to his vassal, the Sanig, or, simply, to his subject living in “dukedom of Sanigia”. It will take half century more and this kingdom will already include the whole Western Georgia.

Squeezed between Russia and the rest of Georgia (and legally part of the latter), Abkhazia is a small area bordering the Black Sea with a population of about 200,000 people. It fought a war with Georgia from 1992-1993 and has been beyond Georgia’s control since that time. In reality, it is a protectorate of the Russian Federation although local leaders claim some degree of autonomy.

Russia has a strategy that rests on cultivating and utilizing fears in Abkhazia. And with nearly 5,000 Russian troops in the separatist region as a check against Georgia’s NATO aspirations, Abkhazia has little space to resist Russian depredations. Any move to limit cooperation with Moscow would be met with Russian economic and political reprisals. Moves to revive its frozen relations with Tbilisi would trigger protests by Abkhaz opposition forces, often supported by Russia, which in the past have often culminated in public violence and takeover of administrative buildings.

This takes place parallel to continous pressure against the ethnic Georgian population which still lives in the Gali district, just beyond the Enguri River. Georgians are deprived of basic rights such as learning in Georgian, ability to travel freely to Tbilisi-controlled territory, and the right to hold the Georgian citizenship. The reason for such policies is obvious: facilitation of expulsion of ethnic Georgians from Abkhazia region. What started decades ago is still silently continuing and there is little hope that such an approach will change in the near future. 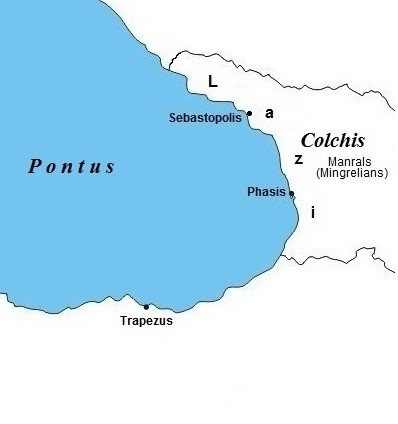