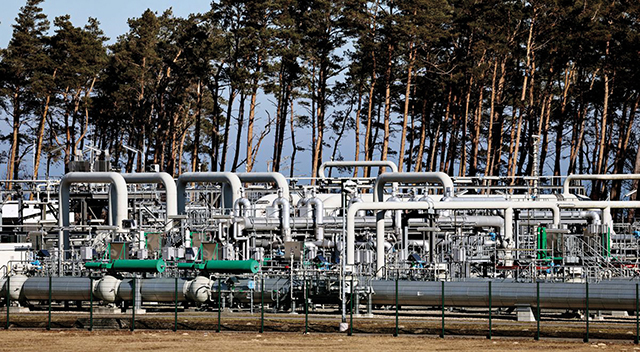 Pipes at the landfall facilities of the 'Nord Stream 1' gas pipeline are pictured in Lubmin, Germany. Source: REUTERS/Hannibal Hanschke

Russian gas producer Gazprom said its supply of gas to Europe through Ukraine via the Sudzha entry point was up slightly, as Russia also resumed critical gas supplies to Europe through Germany, reopening the Nord Stream gas pipeline after 10 days of maintenance.

Gazprom has cut flows to Germany via the vital Nord Stream 1 pipeline by 40% in recent weeks, blaming the absence of a Siemens gas turbine undergoing repairs in Canada. The German government has rejected Gazprom’s explanation.

The European Union has set out emergency plans to reduce its gas use amid fears Russia could cut off its supply in winter. It proposed a voluntary target for countries to restrict usage by 15% from August until March, accusing the Kremlin of using gas exports as blackmail.

“Russia is blackmailing us. Russia is using energy as a weapon,” the European Commission president, Ursula von der Leyen, said in a news conference.

Ukraine’s authorities have repeatedly called on Europe to boycott energy supplies from Russia.