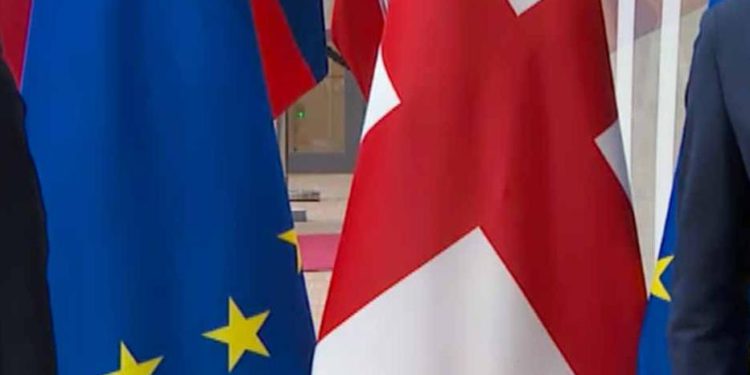 Poll results released by the National Democratic Institute (NDI) and CRRC Georgia show that the Russian invasion of Ukraine has amplified Georgian’s views that Georgia would benefit from a closer relationship with EU and NATO rather than with Russia.

Security concerns emanating from Russian aggression have led to a marked increase in public perception that Russia is a threat to its neighbors. There is a 16% increase in people who believe Georgia should limit economic ties with Russia (39%, versus 23% before the invasion).

The majority of Georgians remain concerned about the growing Russian influence on Georgia over the last five years, and expect economic decline (80%), advancement of pro-Russian actors (57%) and Russian military aggression (52%) in the coming year.

Perhaps for these reasons, Georgians remain steadfast in their support for membership in the EU, placing EU at the top of the most desired political and economic partners list. A total of 82% approve of joining the EU, mostly naming economic growth and security as the primary reasons for their approval.

A majority of Georgians say that war in Ukraine is Russia’s (67%) and Putin’s fault (11%), and demonstrate an overwhelmingly positive attitude towards the Ukrainian people (98%), as well as the Ukrainian government (87%). In the face of Russian citizens’ migration to Georgia, there is significant public support for the introduction of a visa regime for Russian citizens (66%). Moreover, 63% are pleased with the Georgian President’s response to the war in Ukraine, while the Prime Minister’s actions were assessed as positive by 46%.

“In face of the Russian invasion, Georgians are sending a clear message that they remain fully supportive of European and Euro-Atlantic integration. The consistency of the public view on this issue should be seen as a call to action for parties across the political spectrum from Government, to Parliament and local councils,” said Alan Gillam, NDI Georgia Country Director. “Concerns regarding the economic impact of the Russian invasion remain high and policy makers and politicians at every level need to work on solutions to support the public on their consistent top issues of jobs, poverty and rising prices.”

There are similar trends vis a vis NATO – despite a widespread (69%) public perception that membership in the North Atlantic Treaty Organization will increase risks of Russian aggression, the majority of Georgians remain supportive of NATO membership (71%). In fact, after the Russian invasion, more people believe NATO will provide greater security to Georgia than before (54% versus 40% before the invasion).

“NDI surveys public opinion to help Georgian stakeholders diagnose and address issues of public concern by providing accurate, unbiased and statistically sound data. This poll aims to capture the most relevant information to foster the development of responsive policies and governance. New report looks at two nationwide surveys conducted roughly two weeks before and after the Russian invasion of Ukraine. The results reflect data collected between February 3-15 and March 9-20, through telephone interviews with a nationwide representative sample of Georgia’s adult population, excluding occupied territories. The February poll included 2,036 completed interviews, while the March poll included 2024 completed interviews. The average margin of error is +/- 1.8 percent (February poll), and +/- 1.6 percent (March poll). Respondents were selected using the random-digit-dial method. NDI’s survey work is funded by UK aid from the British people. This poll was carried out by CRRC Georgia,” announced NDI.