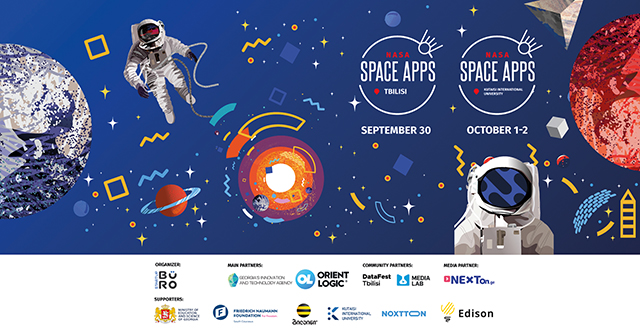 Beeline is the traditional supporter of the local competition of the world’s largest international hackathon – the NASA Space Apps Challenge. Hackathon 2022 brought together 100 participants and 19 innovative ideas.

The Georgian edition of the largest hackathon on the planet ended on October 2, and the event was hosted by Kutaisi International University (KIU).

After two days of intensive work, the teams presented their ideas and project prototypes to the jury. The team TON 618 took first place, winning 5000 GEL and the opportunity to present the project at the NASA Space Apps Challenge global competition.

The winning project facilitates the process of searching for information in NASA databases. The application uses artificial intelligence to help scientists, researchers, students and all interested people find specific information in a large database faster and easier.

The second place went to the IGN team, which told us about NASA’s unprecedented project, “The journey of the Parker Solar Probe from the Earth to the Sun” in the most understandable form for a young audience – in a comic book.

Special prizes of Kutaisi International University and Edison went to teams Space T-Rex and How Dare You.

NASA Space Apps is an annual hackathon that is held simultaneously in 300 different cities around the world and attracts thousands of participants. The goal of the project is for the young participants of the hackathon to work together on real NASA data and find innovative solutions to the most pressing problems of the planet and space in a limited time (48 hours).

As well as working on their own projects as a team, the participants had the opportunity to attend workshops led by the country’s leading specialists on such topics as: data science, prototyping, UI/UX design, data visualization, storytelling, and astrophotography.

In addition to data directly from NASA, hackathon participants use data from space research centers in Australia, Canada, Brazil, Europe, Japan, Argentina, Mexico, India, Bahrain, Paraguay and South Africa.
“Within the framework of corporate social responsibility and digital strategy, Beeline actively supports the development of innovations in the country and the formation of an ecosystem, opportunities for young people to gain valuable knowledge and experience,” said Nini Rekhviashvili, Public Relations Manager at Beeline. “The Nasa Space Apps Challenge serves exactly these goals. That is why we are traditionally project partners in Georgia and are proud of the success of both the hackathon and the winners.”

The NASA Space Apps Challenge Tbilisi & Kutaisi 2022 was organized by Startup Bureau, while the hackathon was hosted by Technopark of Georgia and Kutaisi International University.

“Organizing the NASA Space Apps Challenge, the world’s largest hackathon in Georgia, always fills us with interest and enthusiasm to identify and bring talent-newcomers to the global stage,” noted Guri Koiava, Co-Founder at Startup Bureau. “Thanks to everyone – participants, volunteers, space agencies, partners and NASA enthusiasts. Space-tech in Georgia is in the process of strengthening! This year’s event was special in terms of the strength of the participants and the fact that Kutaisi, another big city in Georgia, was involved in the NASA hackathon.”

As part of its digital strategy and corporate social responsibility, Beeline continues supporting Nasa Space Apps Challenge and the development of innovation in Georgia. The company’s goal is to promote the emergence of new opportunities for young people, to inspire them to come up with creative ideas and to give them motivation to step up.