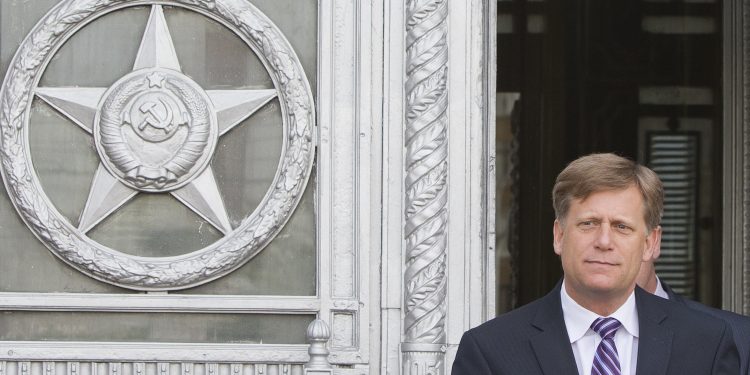 The former US Ambassador to Russia, Michael McFaul, published a letter in the Washington Post about the former president of Georgia, Mikheil Saakashvili, voicing that President Joe Biden, together with European democratic leaders, should make an urgent appeal to save Saakashvili

“Right now, Georgia’s former president Mikheil Saakashvili is languishing in detention there — by some accounts inching closer to death. The Biden administration and its allies can’t let that happen. It’s time for a global campaign to free Saakashvili now — precisely because of his past services to the cause of democracy in his homeland,” he writes.

As McFaul explains, there is one foreign leader who detested Saakashvili: Vladimir Putin, and he notes a successful Georgian democracy on his southern flank was anathema to everything Putin stood for, and as such he was determined to block Saakashvili’s determination to anchor Georgia in the West.

“The Russian president particularly disliked his pronouncements about Georgia’s aspirations to join NATO. Putin feared the color revolutions in Georgia and Ukraine precisely because they threatened the legitimacy and stability of his autocracy in Russia. In August 2008, Putin showed his hand by invading Georgia. He followed by recognizing two regions of the country as independent states, thereby freezing any discussions in Brussels about Georgia’s NATO membership,” McFaul notes.

He adds that as the Georgian government became more autocratic and Russia-friendly, Saakashvili saw no role for himself there and left for Ukraine, where he held a series of official positions with varying degrees of success.

“President Biden, in close coordination with other democratic leaders in Europe, must make an urgent appeal to save Saakashvili. On humanitarian grounds, Biden and others must urge Georgian President Salome Zurabishvili to grant Saakashvili a pardon and allow him to travel to a medical facility outside the country — a measure already demanded by the Parliamentary Assembly of the Council of Europe, which has also declared Saakashvili a political prisoner.

“Saakashvili’s death in jail would be a victory for Putin and a blow to Georgian democracy. No-one understands this better than Zelensky, who last month appealed to the Georgian authorities to “show mercy” by releasing the ex-president.

“Zelensky was right to do so. The United States and the European Union should follow suit. The free world has stood together in defense of democracy in Ukraine. They should do the same in Georgia by pressing for Saakashvili’s release,” McFaul writes.