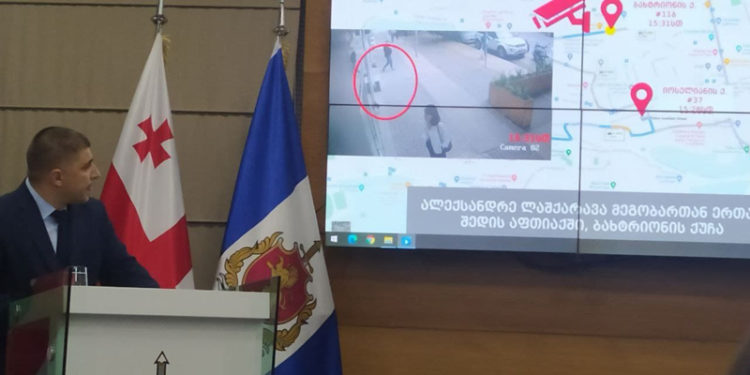 The Ministry of Internal Affairs says a drug dealer who sold drugs to the late cameraman of TV Pirveli, Lekso Lashkarava, has been arrested.

“The officers of Tbilisi Police Department of the Ministry of Internal Affairs, as a result of complex operative-investigative activities, arrested F.A. (DoB 1987) in Ponichala for illegal purchase, keeping, and selling of drugs in especially large quantities.

“The committed crime envisages from 8 to 20 years or lifetime imprisonment.

“The investigation established that the accused was selling drugs illegally, on a regular basis, and he was the dealer from whom the cameraman of TV-Pirveli – Aleksandre Lashkarava, and his companions purchased “heroin” on July 10 in Ponichala.

“Law enforcers conducted a number of investigative activities within the framework of the ongoing investigation, in particular – dozens of witnesses have been interrogated, procedures of identification were held, recorded video materials have also been viewed and studied and relevant forensic reports received.

“Based on the evidence obtained in the course of the investigation, the law enforcers arrested F.A. on July 17 in the Ponichala settlement.

“During the personal search of the detainee, the law enforcers seized drugs in especially large quantities ready for realization, wrapped in four packages. As a result of the search activities held in the detainee’s place of residence, police additionally seized three packages of drug substances as evidence.

“The investigation is in progress on the fact of illegal purchase, keeping, and selling of drugs, article 260, I and IV parts of the Criminal Code of Georgia,” the investigative agency stated.

On July 12, the MIA said that “Based on the chemical examination report, drugs were found in the samples taken from the body of TV Pirveli cameraman Aleksandre Lashkarava.”

“Based on the examination, the cause of death might have been a drug overdose. However, this conclusion is not final,” said Mamuka Chelidze, Director of the Central Criminal Police Department.

The above statement caused made by the police caused great outrage among the media and the public, as the reason behind the cameraman’s death was clearly the physical violence inflicted on him by Tbilisi Pride opponents on July 5, as a result of which he was severely injured.

We will have to wait another month for the final conclusion from the forensic examination to be announced.