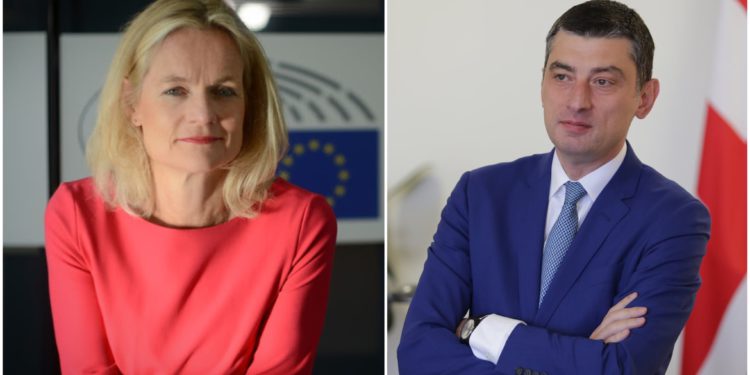 MEP Viola von Cramon says she had a conversation with former Prime Minister Giorgi Gakharia a few days ago, during her stay in Tbilisi, but claimed that they “did not discuss specific topics,” but rather stuck to broader issues.

“We talked, but not on specific topics; we spoke about broader issues, about plans and proposals he might have, but we did not discuss anything specific,” she said.

“If people want to form a new party, and this is a concrete step to overcome the current crisis, why shouldn’t that happen if we want a more moderate electorate, more moderate positions, a pro-European party. This choice doesn’t depend on me: it is up to the Georgian voters to decide,” she said.

The MEP held information meetings in the Georgian capital Tbilisi earlier in April. She came to Georgia following the second visit of Christian Danielsson, Personal Envoy of European Council President Charles Michel, when the second round of talks between the ruling party and the opposition, which he was mediating, ended without agreement.

Von Cramon held meetings with the leaders of opposition parties, among them Lelo and the United National Movement, focused on the mediation processes.

Gakharia resigned as PM on February 18 due to differences of opinion about the arrest of Nika Melia, the leader of the United National Movement. Following his resignation, the former PM stated that he is not going to leave politics and instead plans to establish a political party and a new political force.

“We are former Prime Minister Giorgi Gakharia’s team and share his values. By joint decision with Gakharia, we are moving to a new phase of building a party. We are leaving the Georgian Dream and will continue working in Parliament as independent MPs,” Khojevanishvili said.

Chairman of the Parliament Archil Talakvadze said that the decision of the 6 majority deputies to leave the party was wrong.

“It is unacceptable and unjustified that they refer to the responsibility of the team, but exempt themselves from that responsibility.

“We will see what party they form. It is a shame when you avoid responsibility and yet talk about the problems for which you also responsible,” he noted.