Nikoloz Samkharadze, a member of the parliamentary majority, says that the reprimand expressed in the statement of the US Embassy in Georgia against the ruling party, regarding the legislation of the Administrative Code, is “unfair.”

Samkharadze stated on Palitranews that the statement of the US Embassy speaks not about the content of the legislation, but about the procedure.

“I think it is unfair. They focus not on the content of the legislation, but on the procedure,” he said.

The US embassy said in a statement that there was not enough discussion with the opposition parties, which was not the case, and the opposition was represented in the committees. Regarding the rest of the opposition, Samkharadze said that “no one can be forcibly brought to the committee sessions and the parliamentary session.”

He also explains that the ruling party agreed to difficult conditions, which the opposition did not deserve. Samkharadze claimed that, despite the US statement, it was worth accepting the change.

Yesterday, April 29, the US Embassy in Georgia criticized Georgian Dream for the recent amendments to Georgia’s Administrative Violations Code.

“We are deeply disappointed by the ruling party’s rushed passage of amendments to Georgia’s Administrative Violations Code today. An expedited passage of these amendments was unnecessary and unhelpful. The lack of meaningful consultation with opposition parties, civil society and other stakeholders raises questions about the purpose of the amendments,” reads the statement.

On April 29, the Parliament adopted amendments to the Code of Administrative Offenses in the third and final reading, thus:

NGOs, activists and opposition parties have called the changes “unreasonable” and said the code was “becoming even more repressive.” 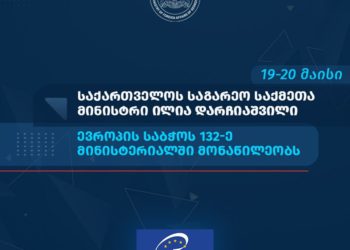 Minister of MFA Participates in Ministerial of Council of Europe