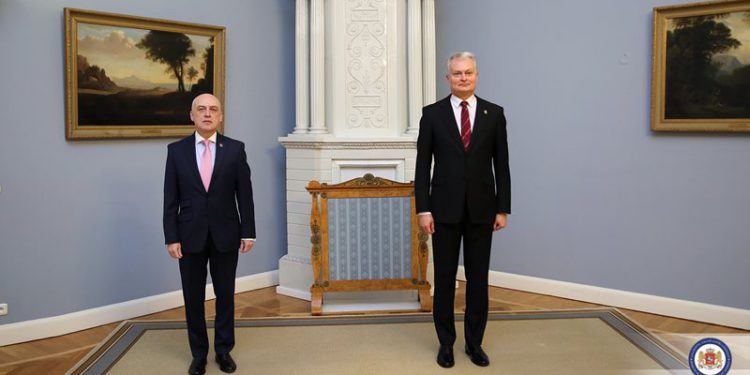 Within the framework of his official visit to Lithuania, the Vice Prime Minister of Georgia/Minister of Foreign Affairs, David Zalkaliani met with the President of Lithuania, Gitanas Nausėda, During the meeting with the President, Lithuania’s strong support for Georgia’s sovereignty, territorial integrity and the country’s Euro-Atlantic integration process was underlined.

Paying particular attention to the current security environment and the ongoing dialogue with Russia, the sides reaffirmed the partner countries’ strong position to support the aspirations of Georgia and Ukraine. They also highlighted the importance of high-level coordination with NATO, the United States and partner countries. During the meeting with the President, the agenda of Georgia’s European integration was discussed. The sides positively appraised the Eastern Partnership Summit expected to bring tangible results to Georgia.

The sides focused special attention on Georgia’s peace initiative for the South Caucasus. The Lithuanian President welcomed the initiative voiced by the Georgian Prime Minister from the UN rostrum to promote the sustainable peace process in the region. The sides discussed the situation in the occupied regions of Georgia and the Russian Federation’s illegal activities negatively impacting both the humanitarian and security environment. The Georgian Vice Prime Minister thanked the Lithuanian President for his support to Georgia as manifested by his official visit to Georgia.