Legend of the Grandparents. Part 1 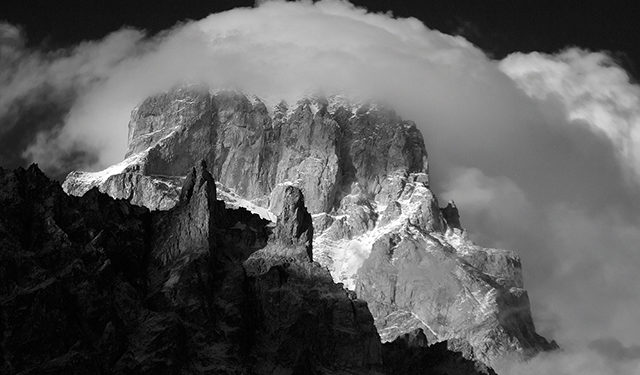 I recently photographed the famous “Babua and Bebia” (Grandfather and Grandmother) pinnacles which stick up like fangs below the south peak of Mt. Ushba, especially as seen from Becho village. It was evening, and to my amazement the sunset lighting, upon enlargement of the pair, clearly showed an old man and woman, details I had never noticed despite many earlier photos from these and other angles over two decades. Not knowing how they had been named, or the legend behind them, I decided to write their story, hoping to put into it all of my fascination for this great edifice. At every step, I was aware of plot elements tugging me this way or that, each with its repercussions on all which would follow.

Eventually something emerged from the end to the beginning, the goal always in sight but the path to it taking a while.

Part I: The Players
Ushba is old, very old, so old that no one remembers when or how he came to be. While he is not the tallest of all the many Caucasus Brothers and Sisters, he IS the most severe and forbidding, while also being the most beautiful to look at. This is the paradox of a lovely exterior combined with a personality which should make one hesitate before trying to get to know him for who he really is.

Ushba also has many children and grandchildren of his own, some formed from his own rock substance untold times ago, others more recently adopted into his family from other lineages. Babua and Bebia are among this latter group, with entirely human origins.

They had had a long, fulfilling life, with many descendants of their own, all under one roof of a huge stone house in Mazeri, enlarged as necessary to accommodate more new arrivals by marriage or birth.

Despite all the people who had joined this family, bringing their differences with them, there was generally harmony, with Babua and Bebia presiding over all. They tried for an atmosphere in which conflicts could be resolved before they developed into ongoing feuds, knowing how disparate people can be when they have come from outside or even grown up within, as each has a unique character. Being the family elders, they were much respected by the younger generations, even if privately some of these thought this couple were old-fashioned and that they knew better.

Part II: The Problem
Being advanced in years, Babua and Bebia realized that they could not live forever, that the ground must eventually claim their bodies as it has or will us all. They had already seen so many of their own generation of siblings and friends pass away; attended too many wakes, funeral feasts, 40-day and year memorial gatherings, and impromptu graveside ceremonies to boot. But there is no cheating death! Or is there?

Babua and Bebia decided to get the advice of ancient Ushba, towering and glowering over their homeland, despite knowing full well how complicated this might be and not even being sure how much they could trust his words. After the morning’s milking, she put on her best winter dress and covered her head with a fine wool shawl. He changed into his dark formal suit, adding his traditional gray Svan felt cap and a thick felt coat to match, and they felt themselves more ready to approach the chill Peak. Telling their family that they were going on an all-day walk, they took some k’ubdari and an empty water bottle to fill from the delicious local springs, left the house, and began trudging up, up, up through their village.

Part III: The Presence
It was a long enough trek to tire their weary bones, taking quite some hours. At the end of it they had ascended as far as was safe without ropes and pitons. They found themselves on a slippery slate cliff-ledge, staring up at the massive face of Ushba’s south peak, wondering how to get his attention, tiny as they were.

Now, Ushba has as many sides as there are places that you can see him from, each distinguished from all the rest. Sometimes, like from Etseri, you only see one of his two peaks, which differ in height by only 3 meters, the behind one hidden. From Latali you can see both peaks in part; from Mestia, Mulakhi, K’ala, above Ushguli and even from Elbrus you get the two fully side by side. The thing to remember is that the being which presents all these aspects is only one: he is cold, cruel, proud, caring little for the little lives which scurry about his feet or dare to try to reach his summits. Babua and Bebia thought that, having lived many decades near the giant, they perhaps knew him well enough to attempt to match wits with him and not lose too much for it.

First they tried merely shouting, both one at a time and in unison, and finally singing it in harmony, to get a reaction. “Ushba! Ushba! O mighty USHBA!” they cried, but he was as still as the stone of which he is composed, merely producing a wisp more here and there of his cloud stole. His shoulders where the pair were standing were free from snow at this late autumn time, but his head remained completely white with it as always. At least he did not rain down bolts of lightning, ice or slate upon their heads!

They lit a fire from sticks they had gathered as the evening wore on and darkness began to fall: both for their own comfort and security and in the hope that Ushba would see this unusual light and wake up to investigate it. To no avail. Babua and Bebia stayed warm, and no wolves or bears approached, but the Mountain continued to ignore them as before. What would it take, they wondered and pondered somewhat hoarsely now, to have him answer them?

Babua made a sling from part of the cloth k’ubdari bag, and began somewhat impetuously hurling fist-size rocks at the face, as high as his failing strength would allow but still all hitting far from the peak. Bebia danced slowly around the fire, singing. Not a wince or wink or whit.

Then Babua took to ridicule, his patience finally having given out. “What, are you not even alive anymore? Or are you simply too grand to notice us puny beings? Or deaf with your old age? Blind and dumb too? ANSWER ME!” His voice was now ragged, but it carried the full force of his frustration.

At this a breeze began to coil about them in a circle, but it soon grew stronger and stronger. Before long the fire had been blasted apart and sucked up into the sky, and Babua and Bebia were left only with the light of the moon and stars by which to see each other and the towering beast before them, dwarfing them to ant-likeness. Then it was all they could do to crouch and try to anchor themselves to the rock under their feet and not go flying upwards too. The wind became a gale which howled at them.