Legend of the Grandparents, Conclusion 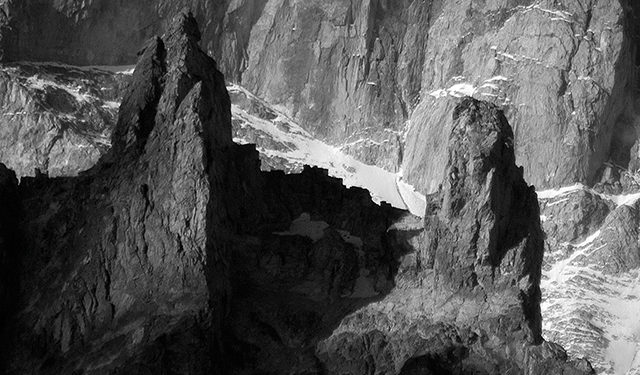 Last week I began this fable about how Babua and Bebia, two prominent rock features of Mt. Ushba, came to be. The couple are now about to be acknowledged by the Mountain.

“WHOOOO ARE YOUUUU!” came the roar, nearly deafening them and leaving them with little breath by which to reply. The very stones now joined the tornado, whirling around in mockery of both Bebia’s earlier dance and Babua’s slingshot tantrum. They clung to each other in terror, nearly flat on the ground, desperate not to leave it and be dashed to smithereens against the wall of Ushba’s face.

“You know us; we’ve lived in your shadow all our lives!” Bebia screamed as a momentary lull came. “We’ve always revered you and exalted the One who made you! But we are old now and don’t have the strength to shout like this! Can we just talk a bit more quietly please!”

At that, the whirlwind began to dissipate, bit by bit; the rocks flew out of their mad orbits, and in a few minutes there was blessed silence again, stars and moon in a cold night. It seemed that Ushba was, at least for now, willing to accede to polite requests.

Then came a puff of breath this time, quiet enough that the old couple had to strain to hear it at all. “Why are you here; what effrontery brings you up to my face to insult me…?” it wheezed. They hoped they had heard right.

“Well… we know that you are so old that no one remembers when or how you came to be; many times, many of our small lifetimes,” Babua whispered back. “Forgive us for getting out of hand in our attempts to converse with you. But we are reaching the end of our walk on earth, and we don’t know what will happen to our love for each other and to our family when we are gone. What is the secret to your great age, and how might we share in it to live longer, please?”

Silence for a while: perhaps only a heartbeat on the scale of the Mountain, but many long minutes for Babua and Bebia, enduring while they shivered, now on their feet again but still clinging to each other, not daring to speak unbidden and risk more fury.

Part IV: The Precipice
“Whhhh… hoooo… You don’t know what you are asking. Everything has its allotted span of minutes or decades or millennia…” came the tiny voice again; they held their breaths to hear it.

“Youuuu… can only change this by becoming something which your people have never been before: my servants and ambassadors to the world.

“Iffff you choose this destiny, you will live as long as I will, but you will also be transformed.

“Howwwwever, you cannot keep both your famous love for each other and your headship of your family.

“Youuuu must choose one or the other.

“But… you have two peaks, why can’t we have both of these choices instead of just one? That isn’t fair!” Bebia said.

“One of my peaks is higher than the other, thoughhhh. And ultimately, I am only one mountain.”

Babua and Bebia together realized that their children and children’s children must eventually lead their own families; the two of them must give way to these upcoming generations, full of energy and strength. And what would it be to lead them all forever anyway, if their mutual love was not part of it, example and inspiration? As one, knowing that they stood before a cliff of decision as real as the rock one at their feet, they said:

“We choose our love to be the higher peak.”

“There is no going back from thissss. Are youuuu suuuure…?” demanded the Mountain. The very stars held their breath.

This time their answers were not the same. Babua responded first: simply, “Yes.” Bebia, however, with her mother’s and grandmother’s heart beating wildly, turned and took a few steps away from him to consider the thing alone. Their new role was to represent Ushba to all who came to see him. But their love would remain as long as the Mountain did. And also, somehow, so would their lives, though changed perhaps beyond knowing.

“My love!” he called out to her. She turned back, to see him fixed to the ground, unable to move his feet.

But there was no fear in his voice: only the certainty of what they meant to each other, regardless of what else would alter around them.

Fixing her gaze upon him, Bebia also said, “Yes.” To both Babua and their new master. Her feet, too, became locked in place, a sheath of rock growing up to encase her as it was doing with her husband.

They became one with the foundation now covering them and wholly preserving their features. Their expressions of this devotion became immutable.

Part V: The Pronouncement
Ushba sighed a last breath and looked down at his handiwork.

“It is good,” he thought in the night stillness. “These miniscule lives still contain much which is unknown to me: their love is vaster than all my stature. I will study them for the rest of my long life, as they gaze each upon the other, and learn from them even as they show me to the world: my human face.”