Leaders of Ukraine, Germany & France to Discuss Situation in Donbas 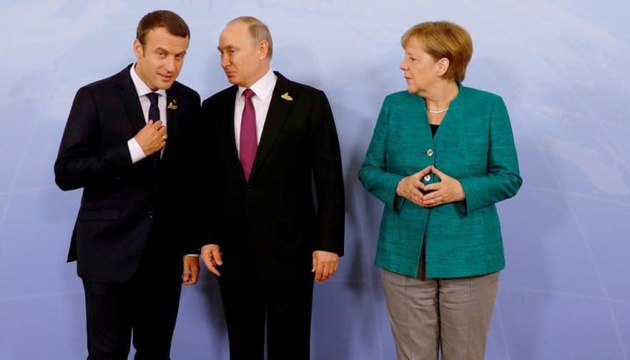 The leaders of Ukraine, Germany and France, Volodymyr Zelensky, Angela Merkel and Emmanuel Macron, may hold a tripartite meeting this week, ZN.UA reports.

The main topic of conversation is expected to be the aggravation of the situation in Donbas, in eastern Ukraine, and the coordination of the positions of the parties in this regard.

The exact date and time of the talks between the leaders of the three countries are unknown at this stage.

Earlier on March 30, during a video conference between German Chancellor Angela Merkel, French President  Emmanuel Macron and Russian President Vladimir Putin, the leaders of Germany and France called on Russia to take on obligations to stabilize the ceasefire in Donbas.

“A NATO official told Reuters news agency that Russia was undermining efforts to reduce tensions in eastern Ukraine and NATO ambassadors had met on Thursday to discuss the situation.

“Allies share their concerns about Russia’s recent large-scale military activities in and around Ukraine,” the official said.

“Russia has warned NATO against sending any troops to help Ukraine, amid reports of a large Russian military build-up on its borders. Kremlin spokesman Dmitry Peskov said Russia would take “additional measures” if NATO were to make such a move.

“Meanwhile, Mr. Peskov accused Ukrainian forces of staging “provocations” on the frontline in eastern Ukraine, where a fragile ceasefire is violated daily,” reports the BBC.

In a phone call with Mr. Zelensky on Friday, US President Joe Biden affirmed the United States’ unwavering support for Ukraine’s sovereignty and territorial integrity in the face of Russia’s ongoing aggression in the Donbas and Crimea, the White House said in a statement.

The War in Donbas, an armed conflict in the Donbas region of Ukraine, is part of the Ukrainian crisis and the broader Russo-Ukrainian War.

From the beginning of March 2014, in the aftermath of the 2014 Ukrainian revolution and the Euromaidan movement, protests by Russia-backed anti-government separatist groups took place in the Donetsk and Luhansk oblasts of Ukraine, collectively called the Donbas region. As the conflict escalated in May 2014, Russia has been continuously trying to destabilize the Donbas region.