Israeli House to Work on Several Projects in Montenegro 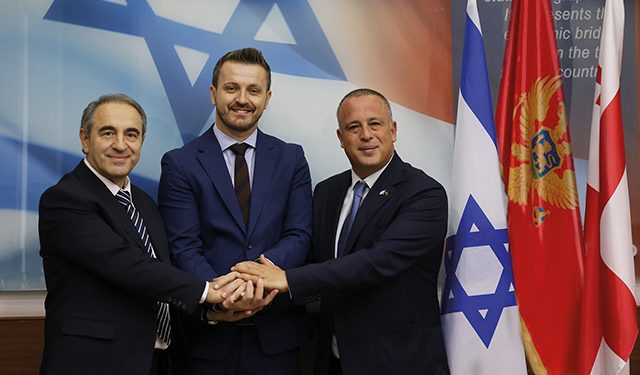 After a successful visit to Israel, the Minister of State Administration of Montenegro, Marash Dukaj, visited Georgia. The working visit was dedicated to establishing future relations with Montenegro.

During the visit, Dukaj, together with the former Knesset Vice-Speaker and the head of the Georgia-Israel Parliamentary Friendship Group in the Knesset, Hilik Bar, met with the head of Israeli House – Itsik Moshe.

The founder of the international festival “Batumian Rhapsody”, recognized soprano Tamar Iveri, and the winner of the festival Elmina Hasan, also took part in the meeting.

At the meeting between Itsik Moshe and the minister, it was agreed to open an office of Israeli House in Montenegro. The office will be launched in April and the goal of the organization will be to represent the real Israel and lobby for direct connections.

Itsik Moshe was officially invited in January and discussion of a cooperation plan in 2023 is under consideration.

At the meeting, Itsik Moshe told the guests, that the history of Holocaust is taught in four universities of the capital of Georgia and more than 200 non-Jewish Georgian students study this subject. This is an expression of the good attitude of Georgia towards Israel and world Jewry. Israeli rooms have also been opened in universities, so young citizens of the friend country can discover the real Israel, which is necessary for successful bilateral relations. In two cities of Georgia, Oni and Tbilisi, Georgian Schindlers’ memorials were placed and the Righteous Among the Nations Park was opened. Both of these locations have already become an inseparable part of AEPJ’s European Route of Jewish Heritage certified by the Council of Europe.

The Head of Israeli House, who is the Vice President of the European Alliance for Israel (EAI), made an agreement with the Montenegrin minister that a governmental group from Montenegro will become a member of the EAI and will join next year’s European delegation to meet the government of Israel. From Georgia, the Head of the Georgia-Israel Friendship Group, Givi Mikanadze will participate.

During the conversation between the Montenegrin minister and renowned soprano Tamar Iveri, it was decided that Montenegro will participate in the next international festival. The Minister invited the winner of this year’s Batumi Festival, Elmina Hasan, to next year’s Israeli Week.

Bilateral business visits for joint energy projects are also planned. The Chairman of the National Energy and Water Supply Regulatory Commission of Georgia, Davit Narmania, will visit Montenegro for this purpose.

Within the short visit, the minister of the Public Administration of Montenegro met with the Mayor of the Capital city, Kakha Kaladze. A memorandum on the twinning of Tbilisi and Podgorica, the capital of Montenegro, will also be signed, an example that connections cover both culture and business. The Republic of Montenegro, a country in south-eastern Europe, borders the Adriatic Sea and Croatia to the west, Bosnia and Herzegovina to the north, Serbia to the east, and Albania to the south. The population of the country, with an area of 13,812 km², is 620,079. The capital and largest city of Montenegro is Podgorica, while the old capital Cetinje is the cultural and historical center of the country.

On June 5, 2017, Montenegro became the 29th member country of the North Atlantic Treaty Organization (NATO). The country is also a member of the United Nations, the World Trade Organization, the Organization for Security and Cooperation in Europe and the Council of Europe. Montenegro is one of the founding countries of the Mediterranean Union.