ISET GDP Forecast | Tourism Decline Main Driver of 2020 Negative Growth. Will it Drive the Recovery in 2021? 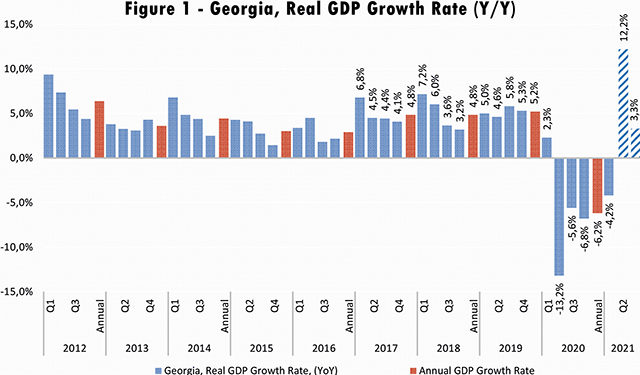 ISET-PI has updated its real GDP growth forecast for the second and third quarters of 2021. Here are the highlights of this month’s release:

HIGHLIGHTS
• Geostat has released its GDP growth estimate for the first quarter of 2021. The Q1 growth stands at -4.2%, which is 1.2 percentage points above the recent ISET-PI forecast.
• ISET-PI’s forecast of real GDP growth for the second quarter of 2021 stands at 12.2% -up from 11% in April. The third quarter growth forecast currently stands at 3.3%.
• Notably, our econometric model depends only on the retrospective information (past observations), thus, an abnormally large negative growth of the real GDP during the second wave of strict government restrictions causes overestimation of the contraction in the first quarter and growth in the second quarter of 2021 .
• Consequently, the annual growth in 2021, from March data, is expected to be 3.9% in the worst-case scenario, and 4.3% in the best-case or an average long-term growth scenario. Our middle-of-the-road scenario (based on the average growth in the last four quarters) predicts a 4% increase in real GDP.

Real GDP by Categories of Use in 2020
Geostat has released information about the decomposition of economic growth by categories of use for 2020. Increase in private consumption and general government expenditure were the main contributors to real GDP growth in 2020. The boost to consumption can be related to the fiscal stimulus aiming at mitigating the effects of the pandemic and the favorable growth of lending to the economy. The impact of the crisis on investments was relatively small, making a negative contribution of 0.8 ppt in 2020 respectively. Net export was the main contributor to the economic slowdown in 2020 (with -8.2 ppts contribution), and drop was mainly driven by the disruption in tourism revenues.

External Merchandise Trade
In March, Georgia’s exports increased by a 30.6% yearly. This trend was mainly driven by an increase in the export of ferro alleys, textile and carbon steel semi-finished products to Turkey; alongside with the export of ferro-alleys, natural grape wines, mineral waters and alcoholic beverages to Russia; re-export/export of motor vehicles, calculating machines and their blocks, as well as copper scrap and mineral waters to Ukraine; export of medicines in Uzbekistan; exports of precious metals and chemical fertilizers to Lithuania; export of spirits to France; re-export of copper and precious metals to China, and ferro alleys to USA. In contrast, Georgian export of copper ores and concentrates to Spain and Bulgaria experienced annual decline.

During this period, the import of goods increased by 17.8%, driven by a increase in import of copper ores and concentrates from Armenia; petroleum and fuel product imports from Russia and Azerbaijan (mostly due to a significant annual increase of crude oil prices on the international market in annual terms – by 104.4% in March). Among other positively affected imports were: vehicles (carrying more than 10 passengers) and electricity from Turkey; copper ores and concentrates from Indonesia; motor cars and trucks from Germany; and paving tiles from Iran. In contrast, Georgian imports of special purpose vehicles from China; motor cars from USA; copper ores and concentrates from Peru; and fuel and petroleum products from Kazakhstan. Consequently, the trade deficit increased by 9.9% yearly, and amounted to 442.4 million USD. Overall, trade related variables had a negative contribution to the GDP growth forecast. 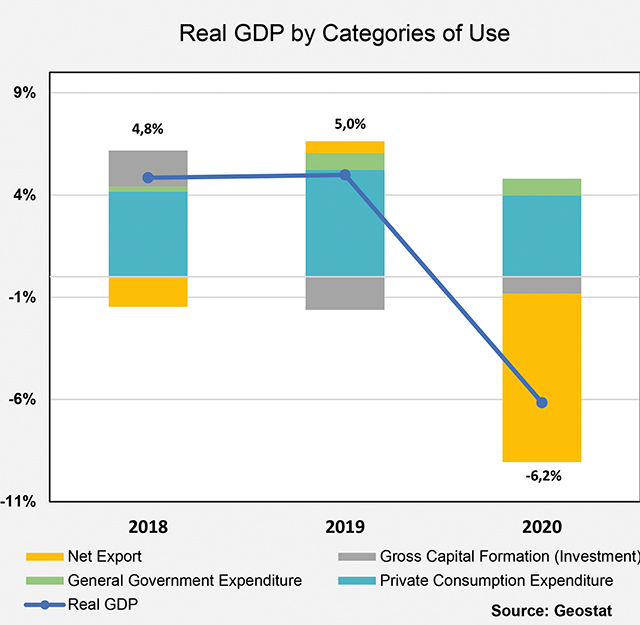 International Visits and Tourism
Tourism arrivals and receipts declined sharply as a result of numerous travel bans, as well as precautionary behaviors on the part of potential tourists. In March, the number of international visitors decreased by 73.4% yearly (driven by Azerbaijan [-18.7 ppts], Russia [-13.5 ppts], Armenia [-12.9 ppts], Turkey [-9.9 ppts] and EU [-5 ppts]), while the decline in tourist numbers (visitors who spent 24 hours or more in Georgia) amounted to 64.4%. Overall, dramatically declining numbers of visitors and tourists, along with a sharp decrease in touristic spending has made a significant negative contribution to the growth forecast.

Overall, 2020 has demonstrated just now much the Georgian economy depends on international tourism flows. This “dependence” also implies that as the economy gradually opens up, Georgia may be reasonably looking forward to a tourism-driven economic recovery.

Real Effective Exchange Rate
In March, the Georgian Lari real exchange rate depreciated by yearly and appreciated by monthly terms against all main trading currencies. The Real Effective Exchange Rate (REER) appreciated by 4.5% relative to the previous months, and depreciated by 5.8% relative to the same month of the previous year. Notably, the Lari real exchange rate depreciated with respect to the Euro, the US Dollar and Russian Ruble by 10.5%, 4.5% and 6.8% respectively in yearly terms, but appreciated with respect to Turkish Lira by 1.2%. REER appreciated with respect to major partner currencies in monthly terms by 2.6% against US dollar; 9.9% against Turkish Lira; 2.8% against Russian ruble; 4% against the Euro. Depreciation of the REER is typically associated with domestic export goods gaining competitiveness on the foreign markets, but it also translates into increased prices on imported goods. Overall, REER-related variables had a small positive contribution to the real GDP growth projections.

Inflation
In March, the annual inflation of consumer prices amounted to 7.2%, which is notably higher than the targeted 3%. Approximately 1.6 percentage points of CPI inflation were related to higher food prices, which increased 5.5% annually (which was driven by higher world food prices), while tobacco prices contributed 0.4 percentage points. Furthermore, increased oil prices made a notable positive contribution (0.4 ppts) to the annual inflation measure. The latter trend is mostly a reflection of significantly increased oil prices on the global market (Euro Brent Spot Price (COP) increased by 104.4% yearly). Meanwhile, the measure of core inflation amounted to 6.6%. Due to substantially higher annual inflation rate compared to the targeted 3% and risks of emerging inflationary expectations, National Bank of Georgia (NBG) increased Monetary Policy Rate (MPR) twice in March 2021 by 0.5 ppt and in April 2021 by 1 ppt. This had a negative impact on the annual real GDP growth. Overall, CPI related variables had a slight negative contribution to the GDP forecast.