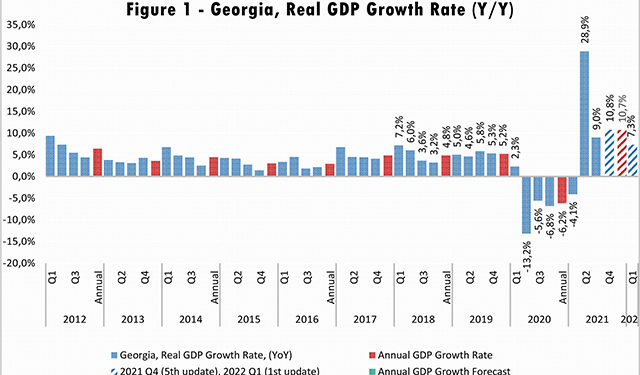 ISET-PI has updated its real GDP growth forecast for the fourth quarter of 2021 and the first quarter of 2022. Here are the highlights of this month’s release:

In addition, foreign currency total deposits increased by 9.8% compared to the same month of the previous year. In the same time period, currency in circulation and foreign currency demand deposits increased by more than 15% annually. As a result, deposit dollarization increased by 0.1 percentage points monthly and has reached 61%. Despite positive annual trends, deposit-related variables still had a slight positive contribution to real GDP growth based on our model.

VAT Turnover.
As far as other variables of interest, VAT turnover in October increased by 9.2% yearly and 2% monthly. Consequently, this variable had a positive contribution to real GDP growth.

Money Supply.
All monetary aggregates, including the largest, Broad Money (M3), and the smallest, Narrow Money (M0), experienced yearly growth: 16% and 0.3%, respectively. Moreover, currency in circulation increased by 3% yearly. However, some of the monetary aggregates, including currency in circulation, M0 and M1 aggregates, slightly declined in monthly terms. Overall, money supply related variables had a slight negative contribution to the real GDP growth for the last quarter of 2021 and the first quarter of 2022 based on our model.

Inflation and Strict Monetary Policy.
In October, the annual inflation of consumer prices amounted to 12.8%, which is notably higher than the targeted 3%. Approximately 5.3 percentage points of CPI inflation were related to higher food prices, which increased 19.2% annually (this was driven by the hike in food prices worldwide – FAO Food Price Index increased by 31% yearly). Furthermore, increased oil prices made a notable positive contribution (1.9 ppts) to the annual inflation measure. The latter trend is mostly a reflection of significantly increased oil prices on the global market (Euro Brent Spot Price (COP) increased by 107.9% yearly). The other important contributors were increased prices on healthcare (0.6 ppts), tobacco (0.2 ppt) and utilities (1.7 ppts). Meanwhile, the measure of core inflation amounted to 6.2%. Due to higher annual inflation rate compared to the targeted 3% and risks of emerging inflationary expectations, National Bank of Georgia (NBG) increased Monetary Policy Rate (MPR) by 0.5 percentage point to 10.5% in December 2021. Overall, CPI related variables had a slight negative contribution to the GDP forecast.

Expectations.
In the fourth quarter of 2021, ISET-PI’s Business Confidence Index (BCI) decreased slightly by 5.8 index points reaching 30.6 points. The highest decrease in business confidence is observed in construction (-21.0), services (-15.3), and agriculture (-8.8) sectors. A negative change in BCI for Q4 2021 was driven by worsened future expectations and weak past performance. In contrast, compared to Q3 2021, BCI increased in retail trade (+20.9), manufacturing (+9.8) and financial sectors (+6.7).

After the increase of consumer confidence in September, The Consumer Confidence Index (CCI) once again reverted to the level similar to June 2021. The CCI decreased from -29.5 in September to -32.5 in October, with both the Present Situation Index and the Expectations Index moving downwards. From a broader perspective, there can be several factors contributing to decreased sentiment from the population: (1) the results of the first round of municipal elections likely dampened people’s expectations; (2) Georgia entered its fifth wave of COVID-19 in October, where the number of cases and the death rate began to rise in the middle of the month; (3) inflation reverted to its highest point (12.8%) in October, with increased oil and food prices being major contributors, which placed additional pressure on households.

During this period, the import of goods increased by 24%, driven by an increased import of petroleum and petroleum products (by 4.1 ppts), packaged medicines (by 2.6 ppts), computing machines and their blocks (by 0.9 ppt), immune serums (by 1.8 ppts), petroleum gases and other gaseous hydrocarbons (by 0.7 ppt), flat rolled carbon steel (by 0.9 ppt), and coal or lignite coke and semi-coke (by 1.5 ppts). In contrast, Georgian imports of motor cars (by -2.1 ppts), copper ores and concentrates (by -0.1 ppt), and telephones (by -0.3 ppt) declined notably. Consequently, the trade deficit widened dramatically by 18.3% yearly, and amounted to 492.8 million USD. Overall, trade related variables still had a small positive contribution to the GDP growth forecast.

World Prices.
The other variables of interest in our growth forecast were Metals Price Index (PMETA) and the Agricultural Raw Materials Index (PRAWM). Metals form a significant share in Georgia’s exports, while food and oil are among the main imports. Therefore, a global increase in the price of metal will likely cause improvement to the Georgian economy, whereas an increase in the price of agricultural products will be damaging. In annual terms, metal prices increased by 42% in October, while raw agricultural material prices increased by 4.9%. On the balance, adding the PMETA and PRAWM indicators to the model thus increases the growth forecast for both quarters.

Foreign Direct Investment.
Foreign direct investment (FDI) in Georgia amounted to only 299.0 million USD in the third quarter of 2020, which is 1.4% higher than the same figure for 2020, and 25.9% lower than same number in 2019. FDI experienced notable increase in agriculture and fishing, manufacturing, energy, construction, hotels and restaurants, transport and health and social work, while FDI decreased in mining, communications, real estate, financial and other sectors. The recent trends in FDI are not yet taken into consideration in our model.