ISET GDP Forecast | In the Eye of the Storm: Driven by Strong External Sector, Economy Expected to Show Double-Digit Growth in 2022

ISET-PI has updated its real GDP growth forecast for the third and fourth quarters of 2022. Here are the highlights of this month’s release:

HIGHLIGHTS
• ISET-PI’s forecast of real GDP growth for the third quarter (July-September) of 2022 decreased by 0.1 ppt to 16.4% compared to the last month’s prediction. The third estimate for the fourth quarter (October-December) growth forecast remains unchanged at 17.3%.
• Geostat recently published its preliminary estimate of real GDP growth for August 2022, which currently stands at 10.5%. As a result, the real GDP growth estimate for the first eight months of 2020 is 10.3%.
• Based on August’s data, we expect annual growth in 2022 to be 13.8%. This number is most likely overestimated by the model at the current point in time. This is due to the fact that war, sanctions and large-scale in-migration had not had relevant analogues in the Georgian data in the past. 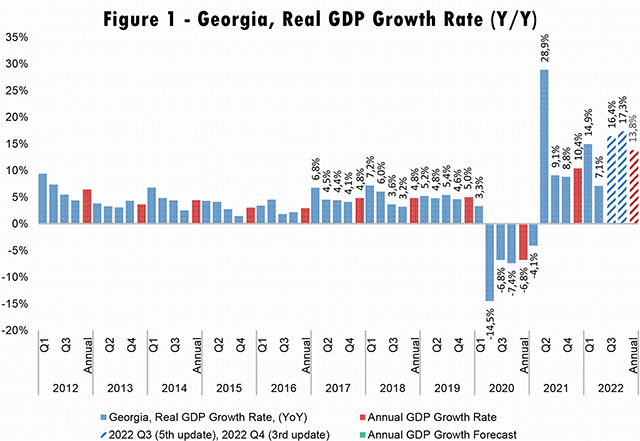 Variables behind the GDP growth forecast:

During this period, the import of goods increased by 39.7%, driven by an increased import/re-import of petroleum (mostly driven by higher prices), motor cars, precious metal ores and concentrates, and copper ores and concentrates. Furthermore, the volume of imports increased by 19% yearly. Consequently, the trade deficit widened by 39.3% yearly, and amounted to 743.1 million USD. Overall, trade related variables still had a small positive contribution to the GDP growth forecast.

Tourism
Tourism arrivals and receipts notably recovered in August of 2022 after a sharp decline in 2020 and a recovery process in 2021. In August, the number of international visitors increased by 178.5% yearly, while the increase in tourist numbers (visitors who spent 24 hours or more in Georgia) amounted to 135.8%. Overall, recovering numbers of visitors and tourists, along with an increase in touristic spending has made a positive contribution to the growth forecast.

Real Effective Exchange Rate (REER)
REER appreciated by 4.6% monthly and 20.2% yearly in August. The Lari Real Exchange Rate (RER) appreciated monthly with respect to the currencies of the major partner countries – Euro (EUR) (by 2.7%), Russian Ruble (RUB) (by 6.2%), Turkish Lira (TRY) (by 4.9%) and US Dollar (USD) (by 2.8%). Moreover, the GEL/EUR, GEL/USD, and GEL/TRY real exchange rate appreciated (except GEL/RUB, which depreciated by 10.2%) compared to the same month of the previous year by 32.5%, 15.0%, and 46.8% respectively. Overall, REER-related variables had a small positive contribution to the real GDP growth projections.

The annual growth was relatively moderate in the case of Foreign Currency Deposits in commercial banks. Deposit Dollarization increased by 1.3 ppts (monthly) to 57.4%.

World Prices
The other variables of interest in our growth forecast were Metals Price Index (PMETA) and the Agricultural Raw Materials Index (PRAWM). Metals form a significant share in Georgia’s exports, while food and oil are among the main imports. Therefore, a global increase in the price of metal will likely cause improvement to the Georgian economy, whereas an increase in the price of agricultural products will be damaging. In annual terms, metal prices as well as agricultural raw material prices decreased by 12.8% and 6.6% respectively in August. On the balance, adding the PMETA and PRAWM indicators to the model thus decrease the growth forecast for both quarters.

Inflation
In August, the annual inflation of consumer prices amounted to 10.9%, which is notably higher than the targeted 3%. Approximately 4.6 percentage points of CPI inflation were related to higher food prices (this was driven by the hike in food prices worldwide – FAO Food Price Index increased by 7.7% yearly1). Furthermore, increased fuel prices made a notable positive contribution (1.1 ppts) to the annual inflation measure. The latter trend is mostly a reflection of significantly increased oil prices on the global market (Euro Brent Spot Price (COP) increased by 42% yearly). However, the same variable decreased by 10.3% monthly. Hence, there are two factors giving us a reason for optimism on inflation: (1) oil prices started to decrease from their peak earlier in the year and (2) GEL exchange rate appreciated against the currencies of the main trading partners. Meanwhile, the measure of core inflation amounted to 7%. Overall, CPI related variables had a slight negative contribution to the GDP forecast.