ISET-PI has updated its real GDP growth forecast for the first and second quarters of 2022. Here are the highlights of this month’s release:

HIGHLIGHTS
• Geostat has published its rapid estimate of real GDP growth for the fourth quarter of 2021, and their estimated growth stands at 9.5%, which is 1.4 percentage points below the ISET-PI’s most recent forecast.
• The annual real GDP growth in 2021 amounted to 10.6%, which is 0.2 percentage point lower than our recent prediction.
• As a result of the update, the growth forecast for Q1 of 2022 was revised downward to 5.9% from 7.4% in January. ISET PI’s first forecast for Q2 of 2022 puts GDP growth at negative 3.9% (as explained below, the negative result is driven in part by the high base effect from Q2 2021, when quarter’s growth reached 28.9%).
• Based on December data, the annual growth in 2022 is expected to be 1.7% in the worst-case scenario, and 2.7% in the best-case or an average long-term growth scenario. Our middle-of-the- road scenario (based on the average growth in the last four quarters) predicts a 2.1% increase in real GDP.
• Notably, our econometric model depends only on the retrospective information (past observations), thus, an abnormally large growth of the real GDP in the second quarter of 2021 (which was partially driven by base effect and accumulated demand) might cause underestimation of the growth in the first and second quarters of 2022.
• According to the recent Monetary Policy Report of the National Bank of Georgia (NBG), real economic growth forecast for 2022 remained unchanged at 5%. This growth prediction is driven by increased fiscal spending, lending activity and foreign revenue (including tourism). 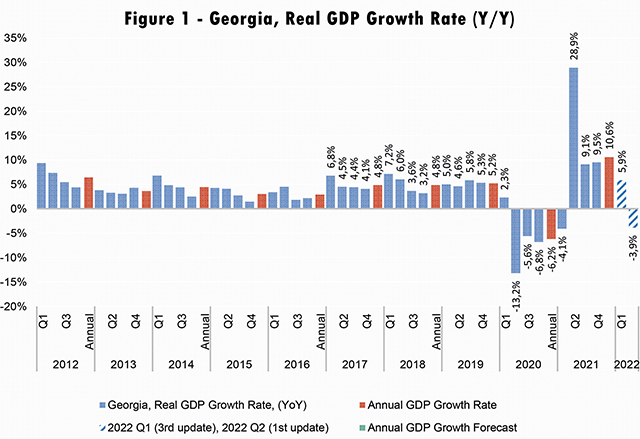 Variables behind the GDP growth forecast:
Merchandise Trade. In December, Georgia’s exports experienced an 28.8% annual growth. This was mainly driven by increased export/re-export of ferro alloys (contributing by 14.4 percentage points), copper ores and concentrates (by 4.0 ppts), and mineral and chemical fertilizers (by 3.3 ppts). In contrast, exports/re-exports of motor cars (by 0.1 ppt), natural grape wines (by 0.4 ppt), alcohol spirits (by 0.5 ppt), mineral and still water (by 0.1 ppt), medicines (by 0.2 ppt), hazelnuts and other nuts (by 0.2 ppt), and citrus (by 0.3 ppt) experienced annual decline.

During this period, the import of goods increased by 26.3%, driven by an increased import of petroleum and petroleum products (contributing by 4.5 percentage points), and copper ores and concentrates (by 3.2 ppts). Consequently, the trade deficit widened dramatically by 24.6% yearly, and amounted to 618.5 million USD. Overall, trade related variables still had a small positive contribution to the GDP growth forecast.

Tourism.
Tourism arrivals and receipts only partially recovered in December of 2021 after a sharp decline in 2020. In December, the number of international visitors increased by 226.4% yearly (decreased by 69.9% compared to the same month in 2019), while the increase in tourist numbers (visitors who spent 24 hours or more in Georgia) amounted to 239.1%. Overall, recovering numbers of visitors and tourists, along with a moderate increase in touristic spending has made a small positive contribution to the growth forecast.

Real Effective Exchange Rate (REER).
REER appreciated by 4.0% monthly and 20.5% yearly in December. The Lari Real Exchange Rate (RER) appreciated monthly with respect to the currencies of the major partner countries: Turkish Lira (TRY) (by 15.3%), Euro (EUR) (by 2.1%), Russian Ruble (RUB) (by 2.2%), and US Dollar (USD) (by 1.2%). Moreover, the GEL/TRY, GEL/EUR, GEL/USD, and GEL/RUB real exchange rate appreciated compared to the same month of the previous year by 55.2%, 23.8%, 12.9%, and 11.0% respectively. Overall, REER-related variables had a small positive contribution to the real GDP growth projections.

Money Supply.
All monetary aggregates except the narrowest, Narrow Money (M0) and Currency in Circulation, experience notable growth in annual terms. Monetary aggregates M2 and M3 experienced yearly growth of 17.8% and 11.3%, respectively. Meanwhile, currency in circulation decreased relatively moderately by 1.6% yearly. However, the Narrow Money (M0) decline by 5.1% in annual terms. Overall, money supply related variables had a slight positive contribution to the real GDP growth for the first and second quarters of 2022 based on our model.

Inflation.
In December, the annual inflation of consumer prices amounted to 13.9%, which is notably higher than the targeted 3% (reaching its maximum level since 2011). Approximately 4.7 percentage points of CPI inflation were related to higher food prices, which increased 16.1% annually (this was driven by the hike in food prices worldwide – FAO Food Price Index increased by 23.5% yearly). Furthermore, increased oil prices made a notable positive contribution (1.9 ppts) to the annual inflation measure. The latter trend is mostly a reflection of significantly increased oil prices on the global market (Euro Brent Spot Price (COP) increased by 48.4% yearly. The other important contributor was higher utility prices, with contribution of 3.6 ppts –2 ppts higher than in the previous month . Meanwhile, the measure of core inflation amounted to 6.0%. Due to higher annual inflation rate compared to the targeted 3% and risks of emerging inflationary expectations, National Bank of Georgia (NBG) increased Monetary Policy Rate (MPR) by 0.5 percentage point – to 10.5% in December 2021. The MPR remained unchanged in February 2022 (thus, NBG continue undertaking strict monetary policy). Overall, CPI related variables had a slight negative contribution to the GDP forecast.