Indulge Me – I Have More 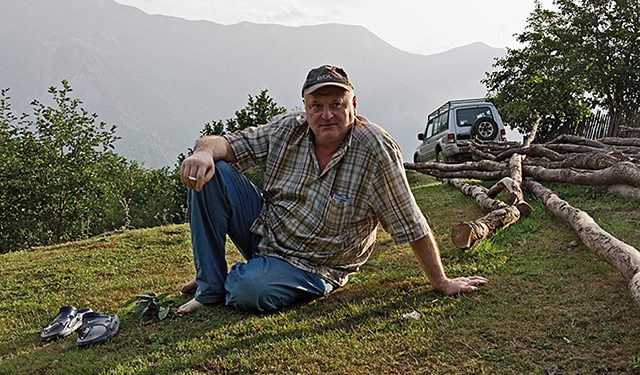 The funeral was here, thank God, actual location decided after some fairly late back-and-forths. Sure, he had many, many friends and relatives up there in Svaneti; half or more of his village of Etseri would have turned out for it. But so few of us would have gone from here, in contrast: it’s an 8 hour journey minimum, and it’s cold there now, and where on earth could you have the funeral feast for 350 or more people which we had here? The single place I know of is the largest hotel in Mestia: drive us all from Etseri the 30 km there and same back, back being trickier as many people would be drunk. Hopefully no drivers would, but you never know, as bitter, deadly experience has shown me.

Plus, his wife and two adult children live here in Tbilisi; visiting the grave is a super-important thing in Georgia (we did it today as I write this, for the 9th day after death), and how often could or would they make the arduous journey? There’s the ormotsi (40 days after death feast) and the year after death, plus Easter, and more.

They moved the body from his apartment to a large Orthodox church nearby for the day of the funeral, and just as well. The courtyard and interior of the church were filled with hundreds of people filing through who all would have missed a final look and farewell otherwise. Then we convoyed away to the cemetery, then to the feast.

I decided not to ask about taking photos and video of the graveside part of the funeral, just went ahead and shot; and it seems people (especially those who couldn’t make the trip down from Svaneti) were glad when I posted them on social media.

I have to get back in touch with my emotions. I have not yet shed any tears, though plenty of Georgian men did. It was all so sudden, and we were in shock at his passing at age 65, but I still have this knot inside me which must work loose. I wait for that logjam to come unstuck, unable and also unwilling to drum up feelings which might be forced instead of letting the natural grief come out when it’s ready. At least I’m in a culture where a man bursting into tears can get away with it, if that happens.

I still battle the guilt of not trying harder to get allowed into Intensive Care for one last visit with my dear friend. A few seconds’ video of him taken the day before he died shows him conscious, eyes open, waving at the camera. Less than 24 hours later he was gone. My own last photo of him alive is about 7 years old. I have over 160 pictures of him, from 2000 until 2015 or so. They’re not nearly enough, now. Just scraps and snapshots from a rich time together.

We had so many good times that I hardly know where to begin, learning each other’s culture and personality until we were comfortable with each other in either silence or speech. Laughter and tears, arguments and discussions and reconciliations, and the ceremony of becoming blood brothers at his parents’ grave, which delighted him when I initiated it after some innocent inquiries as to the necessary ritual. There’s enough to fill a book: don’t put it past me!