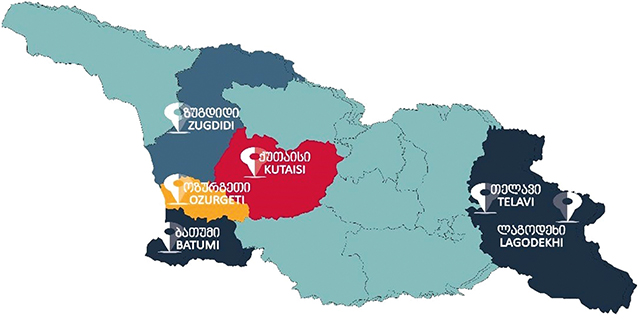 Communities have become more accepting of disability, and perceive persons with disabilities as capable of changing society for the better, thanks to the impact of Independent Living Centers.

By Us; For Us
The ability to make choices and determine our own futures is something most people take for granted. That hasn’t always been true for persons with disabilities in Georgia, but times are changing. Thanks to Independent Living Centers (ILCs) that provide practical support and advocacy for change, more and more individuals are living fuller, more integrated lives across Georgia.

Growth through Opportunity
Before taking the position of chairperson of Telavi ILC, Elene Mtchedlishvili felt that she had already reached her limits of professional growth.

“I had a high education, with degrees in tourism and foreign language teaching. I was happy to have a job as a teacher, but I always felt it wasn’t ‘my’ job. I wanted to do something else – to help other people like me.”

Ms. Mtchedlishvili remarked that many well-qualified people with disabilities are often overlooked, or are expected to be grateful for any opportunity to work. She said that establishing the Telavi ILC was a life-changing moment for her.

“I think I finally found what I was looking for. And now I see that there are more possibilities for me to grow as a professional.”

Ms. Mtchedlishvili emphasizes that everyone has a chance for continued growth if they understand their rights and what is available.

“The training that is provided for staff about disability rights in Georgia really enhanced my understanding of my own rights. Every step forward for the community is also a step forward for me.”

Ramin Macharashvili, a leader at the Batumi ILC, echoed this sentiment.

“The center allowed me to apply my qualification and enhance my professional capacities as a lawyer in the field of disability rights and needs, boosted my confidence, and granted me an opportunity to work in a valuable area for society. ILC benefits not only the people who visit the center but society overall.”

The same is true for family members of a person with a disability. Lali Kochlamazashvili, who works at the Lagodekhi Independent Living Center, commented, “Before, I felt like I was ‘just’ a mother and a caretaker, but now I am so much more.”

Bringing a parental perspective to the ILCs is essential, as families often struggle to support a child with additional needs and are not even aware of their rights.

“I can help to make sure that other mothers don’t have to go through the same experiences of having their child be excluded from school or other activities,” Ms. Kochlamazashvili said. And she knows from personal experience how easy it is to feel overwhelmed. “I get frustrated when parents think they don’t need to take their child to school because support is not in place and ‘nothing will happen’. That’s when I want to jump in and show them the way.” The biggest ‘gift’, she says, is seeing the attitudes and expectations of parents change.

Community Impact
“The impact is life-changing.” These words are commonly spoken by individuals with disabilities who participate in services provided by one of Georgia’s six Independent Living Centers (ILCs). But a growing number of people without disabilities is also taking note of the positive effects the centers have on their communities.

Pikria Baramidze, who heads the Ozurgeti Independent Living Center, is fighting hard to change the stigma of disability. At a recent conference of leaders promoting disability rights and independent living,

Ms. Baramidze spoke about the advantages of having leaders with disabilities who represent the broader community.

“There was a very interesting reaction by the community when I was hired at the ILC. They said, ‘What? Pikria got a job?” Ms. Baramidze laughs as she remembers the initial response of her neighbors. “But I wanted to be an example for others. And it became motivating for everyone, for people with and without disabilities. People in the community started seeing me as more competent and more capable in general. They said, ‘if she can do it, I can do it’.”

Now, two years after she began her job, neighbors are no longer surprised to see Ms. Baramidze working in the community, visiting families, sharing resources, and speaking at events. By having the courage to step up and become a leader, she has unexpectedly become a role model for everyone in her region.

“We see a snowball effect,” she said. “People who receive our services share their positive experiences with others, and then word spreads to even more people. The more people who are served, the more people we see engaging in public life”.

Ms. Baramidze added, “We see changes throughout our community. They are more accepting of disability in general, and in some cases, they see persons with disabilities as more capable than persons without disabilities.”

ILC staff advocate for changes within systems that have historically created barriers for persons with disabilities. Tsira Barkaia, the USAID Independent Living Program’s Chief of Party at MAC Georgia, notes that sometimes the ILC staff collaborate with local social workers to help someone obtain the status of a person with a disability, an essential first step to obtaining state-funded services. But at times, the social workers are so overworked that a person seeking a disability status, requesting basic equipment such as a wheelchair, or involving young children in early education or intervention services might be significantly delayed or fall through the cracks. When that happens, ILC Leaders step in and ensure that the person is not forgotten and that their needs and rights are addressed promptly and carefully.

According to Ms. Kochlamazashvili, “Very often, we have to accompany the individual to the health clinic and narrate to the doctor specifically what is needed for a wheelchair prescription.” She adds, “The doctors are typically quite open to this, and in the process, learn how to tailor support for individuals rather than providing ‘generic’ services.”

These systemic changes, both in attitudes and practical support, have not gone unnoticed by the disability community.

The Right to Have Rights
December 3rd of each year marks the International Day of Persons with Disabilities. According to Dmitri Silagaladze, chair of the Kutaisi ILC, people didn’t really celebrate this day in the past because they didn’t feel that it mattered. He said most people felt it was a celebration ‘on paper’ but not one based in reality. However, 2022 felt different.

“There is a belief that things are different now – the ILCs have fundamentally changed the tone and the plan for the future. Now people know how to position themselves for change; now, it’s about rights,” he says. “It’s not just about asking for money or support but about asking for rights. We have the right to have rights.”

Other ILC leaders also echoed these shifts in their own communities. At the same time, they acknowledge that the changes they are seeing are not reaching all corners of Georgia. According to Ms. Baramidze,

“We do a good job in our own region, but how great it would be to see these services available in all regions of Georgia. We need them everywhere.”

The greatest outcome of all, however, is when the support of an ILC is no longer needed. Before joining the staff at the Lagodekhi ILC, Ms. Kochlamazashvili was a family member receiving their services. After learning about her child’s rights to inclusive education and working together to increase her son’s independence, she saw impressive changes in not only his education but his overall ability to be more self-sufficient. He recently thanked his mother in the best way a 14-year child can: by politely refusing her support. “I don’t need you to take me to school anymore,” he told her. “I can do it by myself.”

By Kathleen Deery and the MAC Georgia team