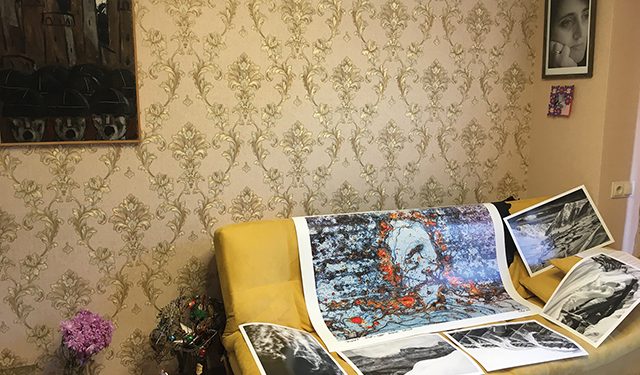 She knew… my wife knew that if we got married, two things would be part of that. One, living in Svaneti. We’re just now taking our first full-winter break from there after 13 years. The other, living in my own gallery, practically a lifelong dream. I printed a few pieces and hung them in the big Svaneti house, but (just as well) didn’t complete that task. And now here we are in our possible retirement flat in Tbilisi.

It’s much smaller: less than ¼ the size of the mountain house. But in both places, I had renovators put in gallery rails where the walls meet the ceilings. These allow you to hang anything using hooks and wire, and no nails. I’m going to fill this space as carefully as I can.

The next challenge has been to find a printer for some things I want to add to my considerable collection of pieces ready for framing or even hanging. I had been counting on the Kodak professional shop opposite the Philharmonia. But their big printer has been out of commission for some time now, and they’re not able to tell me when it might be back in action. Ordinary printers around the city can’t offer either the sizes (larger than A3) or the quality I need.

Eventually a Fuji printer further along Melikishvili street turned up. After a few test pieces, I’m satisfied with their quality; they can do 1m wide by the length of the roll (many m), which is plenty, even for me!

A framer near that shop now has 12 or so pieces of my existing collection, an eclectic set of photos (mine and others’) and screen prints (mine) and more. While these are getting prepared over a week, all in actual wood frames with mattes and glass, I’m readying more of my best photos from a huge set all on external hard drives. Some of these I’m carefully upsizing and working on, minimizing their grain while improving sharpness. My old camera equipment, some 35mm film (now scanned) and some digital from 12 to 24 mega-pixels needs all the help it can get, especially when I’m wanting to have just a FEW pieces at 1m wide or more…

With only 4 rooms to fill, it’s going to be tight. There’s not enough space to devote a room to each location or theme: Georgia, Zimbabwe, Canada, the UK, Russia, miscellaneous. Walls might be the way I differentiate these subjects, with up to several rows together. The goal will be to fill the spaces without overdoing it, so it’s going to be tricky. I must say I’m enjoying the challenge, which has been decades coming while I have moved from place to place and even country to country. It has finally become time to settle down, thus this big push.

Pride of place goes, for now, to a large impressionistic painting by Budu Sirbiladze from 1962. It depicts the heads of 9 Svan men singing in front of 7 watchtowers, and I love it. What I choose to put on my walls will be pieces which I can look at over and over again and delight in; they’ll never get old. I also want to add a few more Georgian painters. Photos of family too, including a couple of my parents and my wife, mixed in among the landscapes and nature.

Soon, Hanmer House and Gallery (Tbilisi) will be open for visitors.