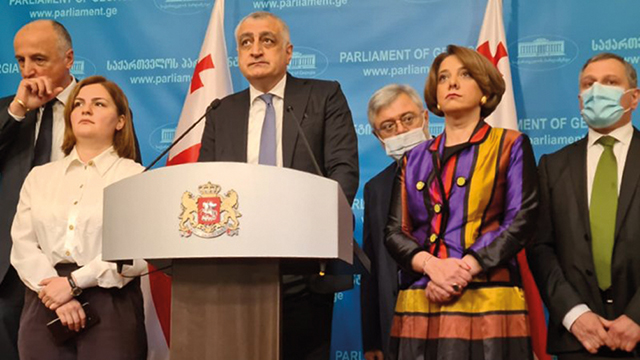 This week, like many, has not been without some changes to the political structure, with the PM taking on two new advisors, a new faction being formed in Parliament, and deputy mayors countrywide accusing the government of forced resignations. Check out the updates below.

“We are working on a new economic recovery plan in the difficult situation caused by the coronavirus,” the PM noted. “In this plan, foreign investment will play a leading role. The country needs investments to help the economy recover faster, meaning more employment and more income for our citizens. We chose Vasil Hudak to assist us in this direction.

“He is a great citizen of Georgia and a great friend, who worked as Vice-President of the European Investment Bank, Minister of Economy and Finance of Slovakia, and previously worked in private banks. He knows Georgia very well, and he knows our economic team well,” Garibashvili said.

Hudak noted that Georgia is very close to his heart and his goal is to help the Georgian government mobilize various resources through international assistance.

The head of the government, in announcing the new appointment, highlighted that defense and security are priority areas for the Georgian government.

Irakli Sesiashvili was a member of the Parliament of Georgia of the 10th convocation, in 2012-2020, and was the Chairman of the Defense and Security Committee of the Parliament of the 8th and 9th convocations. He has many years of experience in both the private and non-governmental sectors, as well as in the academic field. He received his higher education in various specialties at Tbilisi State University, Heidelberg, and Bamberg Universities, and holds a Master’s degree in Security Research from the Institute for Peace and Security Studies at the University of Hamburg.

Right-Wing Businessman Levan Vasadze to Enter Politics
Georgian businessman and one of the founders of the ‘Georgian Demographic Society XXI,’ Levan Vasadze, well-known for his conservative and right-wing views, announced on May 6 that he had decided to enter politics.

“I made a very personally challenging decision to say goodbye to the status of private citizen and step towards the public and political life of Georgia. The ongoing political, economic, cultural, social and ideological crisis in the country prompted me to do so,” he stated.

His public movement is called ‘Unity, Identity, Hope,’ which will be made into a political party in the future.

Vasadze announced that the public movement ‘Unity, Identity, Hope’ will hold a rally on May 16 in Tbilisi, in the April 9 garden, and begin a push for Georgia to return to presidential rule.

Vasadze is known for his extreme hate speech. He has actively participated in anti-LGBT campaigns in recent years.

Lelo Creates a New Faction in Parliament
A new faction will start functioning in the Parliament of Georgia, called ‘Lelo – Partnership for Georgia,’ Mamuka Khazaradze, the leader of Lelo, said at a briefing in Parliament on Thursday.
Besides the members of Lelo, MPs Salome Samadashvili, Armaz Akhvlediani and Shalva Shavgulidze will be in the faction.

“I believe we all understand that today is a new, very important stage in the political history of our country. We must leave behind the worst political crisis that has deprived the country of a chance for development, and we must prepare to defeat the Georgian Dream in the local elections. Then we will say goodbye to the oligarchic regime once and for all through early elections,” Samadashvili said.

On May 13, Salome Samadashvili officially left the ‘United National Movement,’ noting that she had been waiting for the party chairman Nika Melia to be released from prison.

“Nika Melia understands my arguments and we remain friends,” she said.

At this stage, it is unknown whether former UNM Chairman Grigol Vashadze and former European Georgia Leader Davit Bakradze will join the new fraction.

“I will work in the Parliament as a non-partisan, independent MP,” Bakradze told journalists.

He said he will co-operate with the opposition in Parliament, but does not plan to join any of the factions.

All the above former public officials say the reason for their leaving was the demand to do so of their mayors, who allegedly received instructions from the ruling party Georgian Dream, because the former deputy mayors consider themselves members of Ex-Prime Minister Giorgi Gakharia’s team.

Former Deputy Mayor of Poti, Paata Lagvilava says that the Mayor Gocha Kurdghelia notified him about the dismissal, however, the initiative, he says, came from the Georgian Dream party.

“He told me that there was a demand from the party that we resign. I noticed during the conversation that this was not his personal initiative,” said Lagvilava.

“The Mayor was in a very awkward situation. There was a request from the government. Consequently, I made the decision to resign. I was considered a member of Giorgi Gakharia’s team,” he said.

Earlier, Gori Deputy Mayors Erasti Elijarashvili and Paata Ivanishvili, as well as Khashuri Deputy Mayor, were dismissed from their posts.

Following his resignation, the former PM stated that he is not going to leave politics and is planning to establish a political party and a new political force.