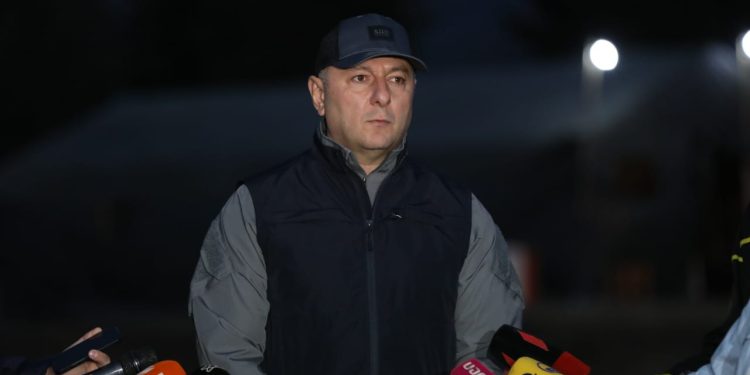 The Minister of Internal Affairs, Vakhtang Gomelauri, arrived in Borjomi municipality and personally inspected the area affected by the fire.

Gomelauri attended the working meeting at the operational management headquarters, where he got familiarized with the situation on the ground and the results of the fire localization-liquidation work.

“3 aircraft joined the work together with the border Police aviation, and I would like to express my appreciation to our friends – the Turkish side. This assistance was very important and greatly contributed to the fire extinguishing works,” stated Gomelauri.

He noted, that due to windy weather the helicopters found it difficult to operate. Therefore, aviation worked at the highest possible level, as the result, the fire sources and the area of expansion have decreased relatively.

“I would like to point out the proposal of our friends – the Azerbaijani side, for which I would like to express my gratitude. I would also like to thank the Armenian side, they offered to help us with equipment, however, we have already mobilized equipment and you can see that we are not capable of working in full force physically, owning to a difficult location.

I would like to underline – there are fires in Europe, as well as in different countries, and everyone is dealing with their own issues. Firefighting aircraft – this is a great luxury and not every country has one, so we do not expect any aircraft from other countries to arrive in the near future,” he stated.

Gomelauri emphasized that the area where the fire spread did not go beyond the red zone, however, the fire has moved to the locations where it was not detectable before and new fire sources were created. Mostly the fire affected the pine forest.

“We have now made a full circle and inspected the area. You remember the fire in Borjomi that occurred several years ago, everything burned at once. This is not the case here, we only have small fire zones. The area is large, but the scale of the fire is comparatively less.

The danger of the fire moving to the population and spreading is excluded. Firefighting trucks are deployed to lower areas and there is no danger that the fire will spread to populated territories unless something miraculous happens and a storm breaks out.

When the fire will be extinguished – is a very difficult question to answer. It is largely dependent on the weather. Let me point out once again that even if we have more helicopters, they will not be able to operate in wind. Also, I would like to inform you that, as it was reported to me, there is no danger posed to strategic pipelines,” Gomelauri.

3 specialized firefighting aircraft of the Republic of Turkey actively participated in the fire localization and extinguishing works, together with the helicopters of the Border Police of Georgia, within the framework of international aid. The firefighting train of the Railway Department was also involved in the fire extinguishing and preventive efforts from the morning.

In order to prevent the spread of fire in the direction of populated areas and strategic objects, and to ensure the safety of the local residents, all relevant measures are being implemented.

Special trenches have already been arranged, all types of fire-rescue vehicles are mobilized as much as possible, and continuous monitoring of the fire is implemented through drones. In addition to the mentioned, additional water pumps have been installed, and several kilometers of routes arranged, leading to fire zones on hard-to-reach terrain which are currently handled by manpower.