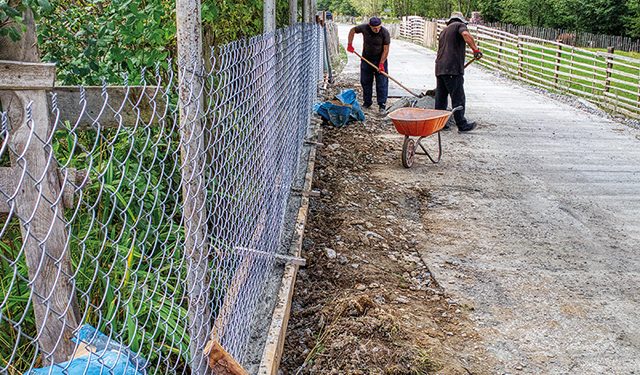 It was by no means the fault of my Iranian/American gate and fence team that weather was a real challenge to their finishing work, with a deadline looming back in Tbilisi. Near-continuous rain several days running made things especially difficult, particularly when there was electricity involved, such as with welding. It also didn’t help with concrete works. But they did the best they could, and then left with our great thanks. And I found a new trio from among my neighbors to finish the job.

Two main parts remained: the rest of the concrete work (mostly along the new fence), and some additional gate-work where the sloping lay of the land meant some long thin triangles under which piglets would certainly be able to enter and wreak havoc, as they are wont to do.

The fence needed wooden sides into which to pour and contain the concrete. We always have extra planks on hand thanks to ongoing building work in general, so this was easy to do. I was struck once again, however, with how much difference a little knowledge makes here.

We tore out the old, wired-together oak post and pine plank fence to make room for work. Then the men gathered the necessary planks and began laying them in place, using a simple twig to measure and keep regular the space between them. They also nailed across some smaller pieces to hold both sides together in this configuration and make it rigid against the weight of the several tons of concrete which they must shovel in. This would cover not only the bases of the new steel fence-posts (already each in its own hole with preliminary concrete to hold it in place) but also the whole bottom few inches of the wire fence, so that nothing could burrow under it. (I’m looking at you, again, piglets.)

This simple and logical structure is likely the minimal solution for the job, and I always find such things attractive. It’s like discovering a one-ingredient food, like porridge oats, which I typically want to award for its simplicity.

Of course, you must know the proper ratios of cement, sand and gravel to make a good cement, thinned with water. And have the right weather (dry and staying above freezing) through its drying period of up to a couple of days. The ancient Romans knew these things a couple of millennia ago, and their structures near coasts are a rare example of a material being strengthened over time, rather than corroded to destruction, by salt water. Did they know this too?

We won’t be addressing the concrete driveway issue yet, so the spaces under the gates must be filled in with the extra welding soon, because all it takes is a single incursion of porcine saboteurs for damage to be done. They dig up land most efficiently looking for edibles under it, like roots, and leave quite a mess. The conventional wisdom here is that if anyone’s livestock gets onto your land, it’s your fault for not having adequate preventive measures, not theirs! As long as we’re all on the same page, we can all do what is necessary.

Not knowing the technical details, or having the sheer strength alone, I am most grateful that some of my neighbors are on call for such tasks as these. It also supports the local economy, which in my eyes and theirs is an added bonus. Started by foreigners and finished by locals, our winterization project is looking good.