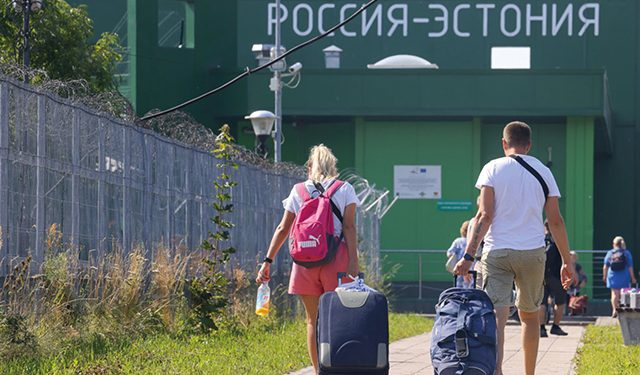 If anything, instituting a more stringent entry policy for citizens of Russia will render their travel document a cursed booklet. Source: eurotopics.net

Few countries have stood by Ukraine as resolutely as Georgia since the Russian invasion in late February. While much of the free world pays mere lip service to the countless victims whose lives were turned upside down and will never be the same again, Georgians walk the walk and put their money where their mouth is.

Nearly every single citizen, irrespective of socioeconomic status, has done their part to ensure that Ukrainian refugees are duly accommodated until it is feasible for them to return home. Having suffered a similar fate back in 2008, inhabitants of Georgia feel morally obliged to go the extra mile in extending a helping hand with no strings attached or underlying motives.

The outpouring of support is such that one cannot stroll past Tbilisi’s thoroughfares without catching sight of Ukrainian flags hoisted upon government buildings and foreign embassies. That said, the remarkable solidarity demonstrated by Georgians far transcends donning yellow and blue attire or sharing catchy slogans on their social media handles because it happens to be the in-thing.

There is genuine concern for the welfare of their brothers in arms, all the while mindful that implicating themselves in this conflict could imperil Georgia’s national security. The Caucasian nation of three million people has led by example and emerged as a steadfast ally, not least by providing much-needed manpower in the form of the Georgian Legion.

Meanwhile, the North Atlantic Treaty Organization (NATO) talks a big game, though steers clear of sending troops to the frontline. By not coming to Ukraine’s aid on the battlefield and helping contain an allegedly demoralized Russian army, the world’s most powerful military alliance has proven itself to be nothing more than a paper tiger which cannot be relied upon once the stakes are dramatically raised.

Its member states tacitly endeavor to overshadow their inadequate response by launching an ill-thought-out sanctions tirade that has all but boomeranged. The European Union, in particular, is already feeling the pinch of energy insecurity and record inflation. Despite concerted efforts by the bloc to form a united front against Russia, the latter continues to run riot and flout international law.

The Europeans seem incapable of agreeing on anything, including how much they are willing to sacrifice for the sake of bringing this brutal war to an end. The most recent schism dividing East and West is whether or not to ban all Russian tourists from the Schengen Zone. Incidentally, the Georgian opposition party floated a similar idea by parliament to scrap the year-long visa waiver Russians enjoy.

Among all the punitive measures that have been tried and tested by the West, this option might well be its unused trump card. Only a handful of European countries have had the audacity to outlaw Russian nationals from entering their territory – all of whom either share a land border with Russia or were part of the now defunct Warsaw Pact. In the case of Georgia, the measure being tabled is comparatively more nuanced than an outright ban.

An online petition to apply a stricter entry procedure for Russians garnered over 20k signatures early last month. Heeding this request would reassure the public at large that democracy is still alive and well in the country. Georgia, along with Turkmenistan, are the only two ex-USSR republics whose passport holders need visas to visit Russia. When the Russo-Georgia war first broke out fourteen years ago, Georgians based in Russia, apolitical or otherwise, were rounded up en masse and forced to leave without due process.

It is high time the Russians got a taste of their own medicine, especially seeing as Georgia has taken the moral high ground for long enough now. In essence, making it tougher for citizens of Russia to enter the country will amount to a proportionate response for the bureaucratic nightmare Georgians have to undergo when applying for Russian visas. Such legislation would also be conducive to discerning high-caliber visitors from the undesirables.

Beyond reciprocal considerations, it seems counterintuitive to be fully behind Ukraine and simultaneously lay out the red carpet for inbound arrivals from Russia. Granted, there are economic benefits to preserving the status quo. However, the extent to which the Russian economy has been cut off from the rest of the world means its people have significantly less purchasing power than before.

As such, opting for hostels instead of hotels, locally-brewed beer rather than semi-sweet wine, and marshrutkas over taxis is likely to be the new norm among this latest wave of cash-strapped tourists. Furthermore, the ambivalent attitude that ordinary Georgians have towards Russians might be perceived as duplicitous by the Ukrainian community and hamper their assimilation into society.

There is an opportunity cost to every room occupied by a Russian in that it could just as easily have been offered to Ukrainians who lost their dwellings and livelihoods as a result of the war. Visitors from Russia have been abusing Georgia’s open-door policy to either overstay their welcome or use the likes of Tbilisi and Batumi as a springboard to reach mainland Europe amid the airspace closure.

Sheltering Russian nationals on a long-term basis presents Georgia’s government with a catch-22 situation. Needless to say, pro-Putin nationalists pose a grave threat to the country’s existing social order and fabric. On the other hand, dissidents are just as much of a liability given that the Kremlin is no stranger to carrying out extrajudicial killings on foreign soil. Tbilisi could become the next Berlin or London, where critics of the regime are taken out in broad daylight.

In an epoch of unprecedented cross-border mobility, passports have become something of a status symbol, affording some nationalities greater travel privileges than others. Following the EU’s decision to grant both Georgians as well as Ukrainians visa-free access to the Schengen Area in 2017, both countries have far surpassed the Russian Federation when it comes to passport strength.

If anything, instituting a more stringent entry policy for citizens of Russia will render their travel document a cursed booklet. This phenomenon will make it tougher for Moscow to entice ethnic Georgians and Ukrainians on occupied territories with citizenship. From their standpoint, switching allegiances to a pariah state with a bleeding economy defies logic. Hence, any naturalization drive by the aggressor will ultimately fall flat on its face.

The short-term gains Georgia may forgo by pulling the plug on unfettered access for Russians pale in comparison to the fruit this decision will bear over time. To begin with, such a move will place Tbilisi on a pedestal in the eyes of the West and encourage other like-minded nations to follow suit. Although seemingly draconian, a consolidated campaign by Georgia and the European Union to keep Russians out is the long-awaited panacea that will help draw this so-called “special military operation” to a close.