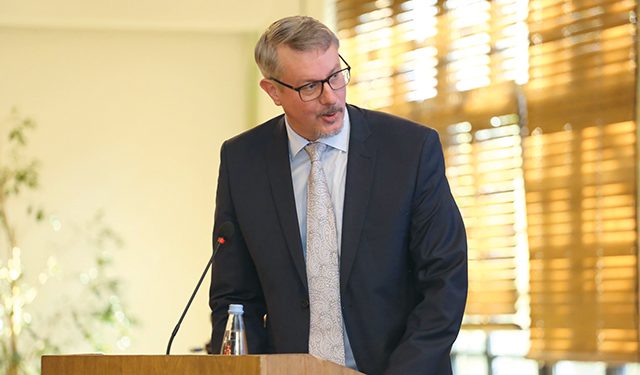 This week, the political life of the country was full of unexpected events and developments. A number of opposition members were heard making critical comments against diplomats, in particular, the US Ambassador to Georgia Kelly Degnan, the EU Ambassador Carl Hartzell, and German Ambassador Hubert Knirsch, who are involved in the negotiations between the ruling party and the united opposition, accusing them of a pro-government course.

“This government will definitely be overthrown, and the US, EU ambassadors will apologize for their anti-Georgian behavior,” declared Nika Gvaramia, the former First Deputy Prosecutor General and the founder of opposition-minded Mtavari Arkhi TV.

Gvaramia claimed the incumbent government is trying to imprison him in order to stop his critical statements against the policy of the ruling party Georgian Dream.

“If I have to go to prison, I will go,” he said. “It will be an honor now, as all normal people are behind bars, having been imprisoned by this government. This TV channel will not stop. This government will definitely be overthrown, and these ambassadors will apologize for their anti-Georgian behavior. Their facilitation is just a way of appeasing their administrations that they have eased the conflict. This is a shame, and this is exactly what is damaging the West. Neither Irakli Kobakhidze, the son of Russia’s official agent and a slave of the Russian project, nor Bidzina Ivanishvili, should talk to me about anti-Western behavior, nor should the facilitators, whose work remains vague,” Gvaramia stated.

He then said he believes US and EU Ambassadors to Georgia, Kelly Degnan and Carl Hartzell, should “Stop talking about him and other political prisoners.”

“I get a stab in the back from the Western institutions like the Strasbourg Court. Ambassador Degnan’s deputy says that Giorgi Rurua [co-founder of Mtavari TV] is the head of an armed gang and his imprisonment is not a shame, but that what I do is,” Gvaramia said.

He claimed that the “US and EU Ambassadors’ behavior harms the West, as they are involved in the trade of the captives and exchange of prisoners to satisfy the interests of Georgian Dream.”

The Founder of Mtavari Arkhi noted he believes said ambassadors should state publicly that Georgian Dream has political prisoners, instead of acting in the interests of the government.

“This is a shame and is anti-western,” he said, adding that it is surprising that someone mandated Ambassador Kelly Degnan to attend the first sitting of the 10th Parliament last Friday.

Nika Gvaramia further called on the opposition not to participate in the ongoing negotiations between the government and the opposition, facilitated by the US and EU ambassadors to Georgia.

The German Ambassador to Georgia responded with surprise to the critical comments made against the diplomats.

“It’s surprising what we hear about diplomats these days, how they argue with insistence and imagination. None of the diplomats offered themselves by force, and this will not happen in the future.

“We have been addressed again and again by opposition parties in recent years. We were told that they are a pro-Western opposition and we, the diplomats, should help them.

“At the same time, it must be said that the Western idea is not expressed in one party or one person, but is the idea of governance and freedom in accordance with the Constitution. That’s why Georgia introduced a parliamentary system after Mikheil Saakashvili’s rule; that’s why the Parliament is so important and diplomats became more active in promoting dialogue between the parties, which will advance the democratic development of Georgia.

“I do not want to talk about certain individuals and their expressions. Those who speak characterize themselves, and the public can evaluate these expressions.

“Georgia has passed the test of democracy. These elections were not the peak of democratic development in Georgia. Improvement and reforms are necessary. Decisions should be made in Parliament.

“I have been following this process, and I think that these loud attacks on diplomats have exactly this basis. We are witnessing a confrontation within the opposition,” the German Ambassador said.

“Everyone has the right to their own opinion,” said US Ambassador Degnan. “However, there is a difference between opinion and fact, and the fact is that Georgia does not have a better friend than the United States.”

She was asked about the critical views expressed by the representatives of the opposition towards the ambassadors, and replied noting that the US Embassy has been working hard for 30 years to help Georgia improve its healthcare, education, and security, to diversify its economy, and to create jobs for Georgians.

“What other evidence can we present to show we care? That is the truth. No matter who has the power, our commitment to Georgia’s success will not change,” she said.

On Tuesday, the leader of the opposition United National Movement, Grigol Vashadze, announced that he was leaving the party. The decision was a surprise even for his teammates.

He claimed he does not agree with the tactics chosen by the majority of the party leadership and employed without consulting the party members. He also expressed concern about the “campaign of attacks and insults” against the heads of the diplomatic missions of the strategic allies.

“I have decided to resign from all positions and leave the party,” he announced. “This step is very difficult for me, but I do not see any other option. Since January 2017, over four years, I have been trying to do everything possible to strengthen the party, to keep it as the main opposition force, and as a result, obtain a mandate from the Georgian citizen to return to power. I think we have achieved a lot, but there are facts that I categorically cannot tolerate. I do not agree with the tactics chosen by the majority of the party leadership without consulting the party members. The lack of party strategy is even more unacceptable to me. It only plays into the hands of the Georgian Dream. I cannot tolerate the fact that such odious figures are around and inside the party, whom we passed to the past long ago, who will never regain the trust of the electorate,” he stated.

Vashadze wrote that he does not understand what the purpose behind the attacks against diplomats is, nor who launched them.

“This is the greatest damage to Georgia’s relations with the United States, the European Union, and EU member states. It seems as though the participants of this campaign do not realize that an attack on an ambassador is the same as an attack on the state they represent, a state that has been guarding our territorial integrity together with the citizens of Georgia since it gained independence. I apologize to our friends!

“I will not continue to list the problems, because the party members themselves talk about them in private conversations. For me, being in the minority or even alone is not a problem. The problem is that I cannot be where I do not see the opportunity and desire to learn from mistakes. I may be wrong. I think we will judge the future very soon,” Vashadze wrote on social media.

On Wednesday, Parliament Speaker Archil Talakvadze and Parliamemtary Majority leader Irakli Kobakhidze held a meeting with the EU and US Ambassadors. The topic of the meeting was the negotiations between the government and the opposition.

Four rounds of talks between the opposition and the government ended without any result achieved. It is unknown when the next round will be scheduled. Currently, the opposition parties still refuse to take up their mandates obtained during the elections, as they believe the results were rigged by the incumbent government; however, some of its members have recently showed a more “loyal” approach towards the issue of entering the Parliament of the 10th Convocation, for instance, Aleko Elisashvili, the leader of the party ‘Aleko Elisashvili – Citizens.’

“I hope and have a reasonable expectation that a number of parties will be involved in the parliamentary work in the near future,“ Chairman of Parliament Archil Talakvadze told journalists after the meeting with the US and the EU ambassadors.

He called on the opposition to use the dialogue not for categorical demands, but in the interests of the country.

“The clock is ticking, and doors are starting to close, and everyone has to realize that,” EU Ambassador Carl Hartzell told reporters when commenting on the talks between the opposition and the government.

He noted that he will not judge the decision of political parties, because, at the end of the day, it is for every party to draw their own conclusions as to what is the right way forward.

“We continue our efforts; we are having talks with different sides to see whether we can find a common ground that would lead to a broad-based agreement in the end. I’m absolutely convinced that Georgia needs a parliament that is able to function and take responsibility for the very tough decisions needed to deal with COVID-19, and everything else happening,” the EU Ambassador stated.