Georgia’s Mask Mandate is Backfiring in a Big Way 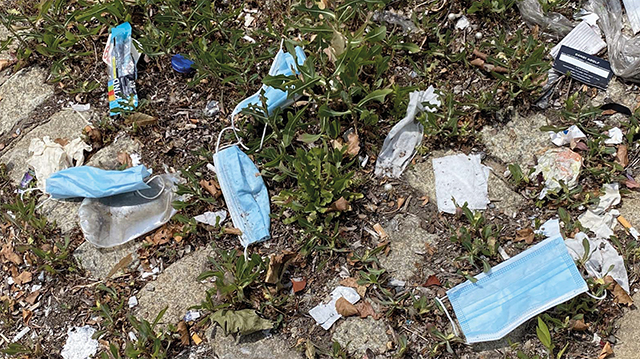 Since the Georgian Government forced the people to wear their masks in every public and many private places, the flimsy cloth sheets have been seen on almost every storefront and with many street vendors. In addition, it has also been seen in the streets, smashed in the mud, and floating in bodies of water. What was never foreseen is the ecological effects of forcing the people to embrace a required, punishable by law, and disposable addition to their daily routine. What’s more is the negative health effects that come with fixing a piece of cloth to one’s face for often hours a day.

Some of this is nothing new to many. People often complain of headaches and breathing issues when forced to wear their mask over long periods of time, such as during a shopping session or during long walks outside. Now, more rising evidence is suggesting that there may be more truth behind this suspicion.

Since the beginning of the “pandemic”, healthcare workers, police, and now the general populace are using and disposing of these plastic-based masks. These masks, that come in a variety of models and styles, were never originally designed for mass general use, but rather specific use by trained medical personnel that would dispose of a relatively small number in biohazard receptacles. Their final disposal and handling would be treated in a specific way, but now they are found in normal trash cans, garbage piles, and littering public spaces.

It’s no surprise, as most people don’t understand the long term effects of this new form of litter. The government, in a rush to look like the heroes by recommending this “wonder-mask” solution, did not display any environmental forethought when applying this mandate: these masks are not made of biodegradable materials, but rather of a thermoplastic composition known as polypropylene. Many of these polypropylene masks, which comprise almost all mainstream models of masks sold to the general public, can be found polluting gutters, roadsides, and open areas where trash collects. Like much of the waste, these discarded masks make their way into sewage systems and waterways, where they cause more problems with public waste service maintenance and local ecosystems. In these waterways, the masks can take almost 450 years to completely break down.

A quickly generated solution is the implementation of a special disposal system for the public, however, the costs of design, implementation, and servicing of this plan could be astronomical to the government, which is to say, the taxpayers. It’s clear that in an attempt to put a “bandaid on a gunshot wound,” the mask mandate has created a new ecological and public service problem that could be even more costly to correct than any virus.

The environment isn’t the only one suffering from the widespread use of masks. People that are being forced to use them for any significant length of time (more than 1 hour of uninterrupted use) are showing physiological signs of distress. The Centers for Disease Control and Prevention (CDC), a division of the United States Department of Health & Human Services, has quietly released more data showing that any lengthy use of these masks is actually detrimental.

Simply put, they have found something that should have been obvious from the beginning: Having your primary means of inhalation and respiratory health restricted and confined against your face is not good, forcing the CO2 that one exhales to be kept and inhaled again. According to the CDC, this change in respiratory abilities results in:
• Headaches;
• Increased pressure inside the skull;
• Nervous system changes (e.g., increased pain threshold, reduction in cognition, altered judgement, decreased situational awareness, difficulty coordinating sensory or cognitive, abilities and motor activity, decreased visual acuity, widespread activation of the sympathetic nervous system that can oppose the direct effects of CO2 on the heart and blood vessels);
• Increased breathing frequency;
• Increased “work of breathing”, which is the result of breathing through a filter medium;
• Cardiovascular effects (e.g., diminished cardiac contractility, vasodilation of peripheral blood vessels);
• Reduced tolerance to lighter workloads.

While the CDC notes that the simple remedy for this is the removal of the mask, this is not quite an option to someone experiencing this in public. Police fines and threats from security guards of removal from the premises don’t allow for this. Government mandates continue to strangle the people.

As the weather warms and the prospect of having a sheet of sweat-absorbent cloth strapped to one’s face becomes more undesirable, this useless mandate should fade just as the winter weather does. Repeatedly in Western circles, reports have cropped up indicating the failure of masks to be significantly effective against the virus we have been coaxed to fear so much. A multitude of medical professionals have tried to come forth to expose the fallacy of the mask, but the damage has been done. People associate the mask with good will, of people doing something good for their community in the midst of the “killer pandemic” with a murderous virus lurking in every corner (especially after the nightly curfew). This couldn’t be farther from the truth, and it has been buried under a mountain of propaganda and poorly substantiated research.

The only way to advance society and curtail the poisoning of the beautiful Georgian ecosystem is to rescind this detrimental mask mandate. The government’s compulsive need to make itself relevant has become more burdensome than usual, and it is past time for the correction to be implemented. With a recent weekly death rate of 0.00024%, it is beyond ridiculous that any restrictions continue.

Statistically based on cases, the population only has a roughly 8% chance of even catching the virus. Even if they catch the virus, 95% will recover, not including the ones who contract it and remain asymptomatic. You have a greater chance of dying in a car accident, shark attack, or lightning, barring any pre-existing comorbidities or severe old age. This is not a basis to ruin an economy and force people to cripple their health and the ecosystem via other means.

Responsible politicians, public figures, diplomats, and the public masses need to make it known that this direction is no longer an option. The ecological and health concerns notwithstanding, the anthropological effects of shifting our society are egregious. The people want it, the economy requires it, and the environment begs for it: Unmask Now!