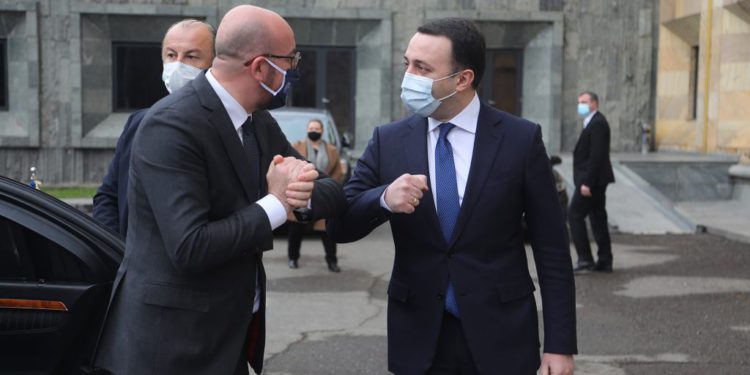 The Prime Minister of Georgia, Irakli Garibashvili met with the President of the European Council Charles Michel, who is paying an official visit to Georgia.

“During the face-to-face meeting at the government administration, we discussed the importance of the Eastern Partnership format and the issues to be discussed at the forthcoming summit. We underlined Georgia’s success as an EU-associated country,” reads the statement released by Georgian PM.

According to the official statement, the discussion was the ongoing current humanitarian situation in the occupied territories of Georgia and the facts of illegal detention of Georgian citizens, the importance of active European involvement in the peaceful settlement of the conflict.

“We also discussed the current situation in Georgia and the EU in terms of the COVID-19 pandemic, the importance of ensuring equal access to the vaccine for all countries, and the crucial role of international partners’ support to start the vaccination process in the near future. I thank the President of the European Council for his visit to Georgia, which is another confirmation of the strong partnership and support from the European Union,” reads the statement.

The President of the European Council will meet with representatives of both the government and the opposition during the day.

Charles Michel will depart from Georgia on March 2.