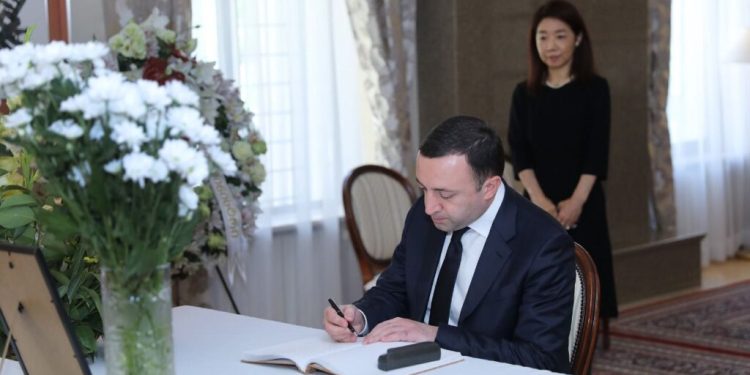 Georgian Prime Minister Irakli Garibashvili visited the Embassy of Japan. The Head of Government recorded his sympathy over the death of the former Prime Minister of Japan, Shinzo Abe, in the condolence book, and extended his condolences to the Japanese Ambassador, Imamura Akira, and his spouse.

“On behalf of the Government and people of Georgia, I wish to express great admiration and most sincere condolences to Japanese people, the family and loved ones of the late Prime Minister Shinzo Abe.

“As an exceptional person and great leader of Japan, he led multiple global efforts for our common prosperous, democratic future.

“In these sad times of grief, we mourn together with the people of Japan,” the Prime Minister’s record of condolences reads.

Shinzo Abe, who served as prime minister between 2006 and 2007 and then again from 2012 to 2020, was killed last week while campaigning in the southern city of Nara after being blasted by a home-made shotgun.

Tetsuya Yamagami, 41, has admitted killing the politician – saying he targeted him because he believes Abe is a member of the South Korean Unification Church, more commonly known as the ‘Moonies’.