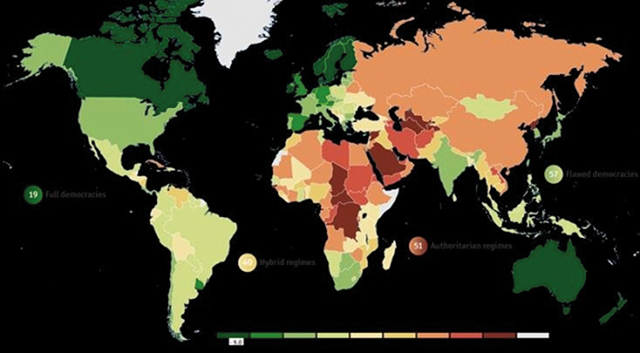 Georgia has ranked 91st among 165 nations and two territories in The Economist Intelligence Unit’s (EIU) Democracy Index, improving its position by two points compared to the 2019 ranking.
The EIU’s report says that almost 70% of countries recorded a decline in their overall democracy score due to the hardships and controversies caused by the coronavirus pandemic.
“The withdrawal of civil liberties, attacks on freedom of expression and the failures of democratic accountability that occurred as a result of the pandemic are grave matters. This is why the scores for many questions in the civil liberties category and the functioning of government category of the Democracy Index were downgraded across multiple countries in 2020”, reads the report.
EIU rates the state of democracy based on five categories: electoral process and pluralism, the functioning of government, political participation, political culture and civil liberties.
Based on the scores on a range of indicators within these five categories, each country is then classified as one of four types of regime: “full democracy”, “flawed democracy”, “hybrid regime” or “authoritarian regime”.
As regards the Eastern European countries, the report reads: “In total, the scores of ten countries rose in 2020, while 17 fell and one stagnated. This clear trend of deterioration across the region indicates the fragility of democracy in times of crisis and the willingness of governments to sacrifice civil liberties and exercise unchecked authority in an emergency situation. The pandemic also served to highlight persistent problems in the region, such as poorly functioning institutions and a weak political culture.”
With its score of 5.31, Georgia is considered a “hybrid regime”.
Only Belarus, Kazakhstan and Russia are classified as “authoritarian regimes” in the region.
The Economist Intelligence Unit’s Democracy Index provides an annual, in-depth analysis of the state of democracy worldwide in165 independent states and two territories.