From Balancing to Extraction 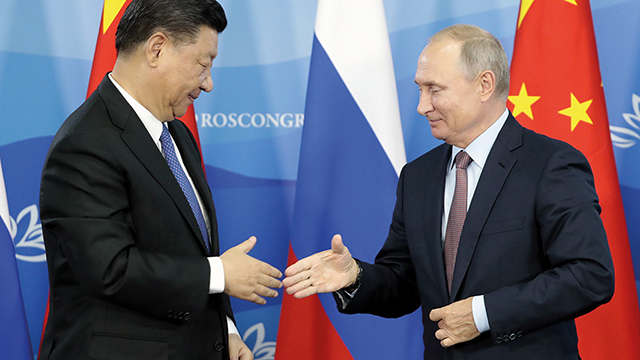 To divide Russia and China, the West first needs to push Moscow toward Beijing. The West needs to think long-term when it comes to the China-Russia partnership. The methods used thus far to divide their growing cooperation have failed. Instead, what the West first needs to do is to drive Moscow closer to Beijing only to see the Kremlin bouncing back to balance the increasingly lopsided ties with China by compromising with the West. It will take years, if not decades, but without this long-term vision, the West’s strategy toward Russia will result in another grave failure.

Russia does not like to be dependent on a single power. In fact, its campaign against the West is an attempt to extract itself from its fixation on Europe. Moscow might presently feel comfortable with China, as Beijing seems to be less demanding when it comes to human rights and other elements of liberal internationalism, but in the longer run, the urge to free itself from geopolitical fixation will push Russia back to the West to seek accommodation.

The latter might not be a total abandonment of its imperial ambitions, simply because Russia cannot do so. Historically, it missed out on the Renaissance and Enlightenment, and only played briefly with liberal experimentation throughout the 20th century. The optimal expectation would be Moscow renouncing its military ambitions in its immediate neighborhood, while the West will leave Russia and its internal development as-is. Truly a shaky peace, but it could be developed into something more fundamental if it produces at least a brief calm in the wider Black Sea region and Eastern Europe.

But first, the West needs to push Russia tighter into China’s embrace. The process started in 2014 after the annexation of Crimea, but at the time, Moscow managed to keep a balance between the West and China. Moscow also played well on fears in Germany, France and other European states that too much pressure put on the Kremlin would push Russia toward China. The second invasion of Ukraine was a watershed moment not only for Ukraine and the resilience of the trans-Atlantic community, but also for Russia’s future. Where, before 2022, Moscow could choose when to rely on China, now it has to do so and in almost all areas. Reliance comes with all sorts of silent concessions as well as the fear of becoming an appendage to the Asian giant.

The process has already started in Central Asia. True that both cooperate, and there is no need for these powers to sign official, binding alliances, as the two are actually freer without them. Beijing and Moscow have bigger space to maneuver and they deeply appreciate this level of freedom. Therefore, the alliance thinking needs to be cast away: We are entering an era of loose Eurasian partnerships. What will unite Eurasian powers is their shared opposition to the West and their growing ability to gradually shape the norms of international relations.

Yet the boundary between healthy balance and toxic dependence is often difficult to trace, and Russia might not be able to stop the process. The recent Shanghai Cooperation Organization (SCO) summit held in Samarkand, Uzbekistan, on 15-16 September, exemplified the troubles Moscow is facing in the region and in its relations with China.

As Russia’s fortunes seemed increasingly volatile in Ukraine, Russian president Vladimir Putin dearly needed a public appearance with Xi, and preferably open Chinese support too. Xi did not voice his public support for Russian actions, a stark discrepancy with the rhetoric from January when the two proclaimed a partnership with “no limits.” Though for Russia the trip was mostly about China, for the latter, the SCO summit was about advancing its more ambitious agenda which involved cementing its influence in Central Asia with the opportunities which emerged amid flagging Russian influence in the region. Xi’s itinerary underlined this thinking and heightened Chinese expectations. Multi-billion trade agreements signed with Uzbekistan and Kazakhstan, as well as the progress on the China-Kyrgyzstan-Uzbekistan railway, are other results of winning Chinese diplomacy. The Central Asian states seem to no longer feel comfortable with Russia, and are increasingly supportive of geopolitical multiplicity in the region.

The dilution of Russia power is now increasingly an established fact. Geopolitical plurality trumps the concept of Russia’s concept “privileged sphere of influence”. Moreover, dependence on China also kills Putin’s much venerated multipolar world concept. These two fears will eventually push Russia to seek accommodation with the West. The West just needs to be patient and supportive of Ukraine and other threatened states near Russia.