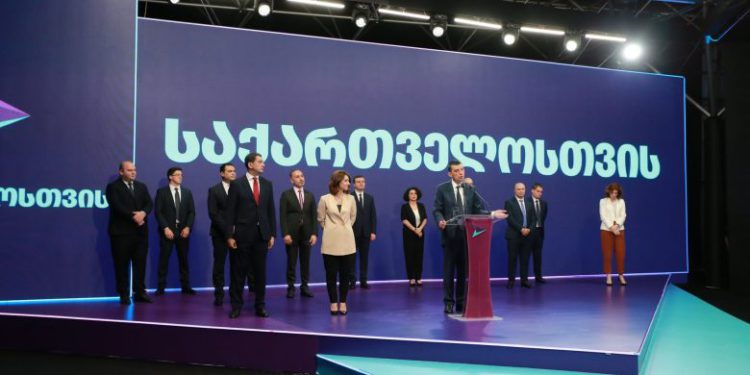 In its activity, the Political Party ‘For Georgia’ actively applies thematic platforms, in which different policy and legal initiatives are being developed with the involvement of interested experts, civil society, and international partners. In this regard, a number of thematic meetings were held before the local self-government elections, announced the political party ‘For Georgia,’ established by Former PM Giorgi Gakharia.

“In recent periods, steps taken by the government have placed particular danger on the country’s further democratic development. Today, the constitutional system of the country is demolished and there is no actual balance of powers between the branches of government, thus we practice a one-man rule.

“The country is governed by the will of one party and not by the legislation. The government conducted the recent elections with systemic violations – pressure, intimidation, and bribery; Openly denied the independence of the judiciary and the prosecution; State institutions/public service were subject to party vertical. The Parliamentary oversight of law-enforcement agencies and the government has become a formality. We have seen open attacks by high-ranking political officials on strategic partners, democratic values, numerous cases of incitement to human rights abuses, and etc.

“Against this background, we think it is particularly important to support the institutional democracy in the country by using all possible instruments – effective reforms that, on the one hand, will make the democratization process irreversible and, on the other hand, prevent authoritarianism. The reforms that ensure the sustainable democratic development of the country in the long run and effectiveness of which will have no mirroring effect on changes in the political cycle. To this end, the party „For Georgia“ is further activating the platform – „Democracy and Rule of Law,“ stated the party representatives.

According to them, adhering to the above principles, the Platform, with the participation of all stakeholders, will develop concrete policies – visions, initiatives, and legislative proposals in other areas relevant to effective governance, the judiciary, the electoral system, human rights, and the development of institutional democracy in the country that is most critical for Georgia’s further development.

Reportedly, legislative initiatives have already been developed through the platform: in particular, the parliamentary team has initiated amendments to the Organic Law on Common Courts, according to which decisions on the appointment of judges in the High Council of Justice are made by a double two-third majority. The aim of this initiative is to weaken the „influence groups“ in the High Council of Justice and to create an alternative center of power.

Also, amendments to the Code of Criminal Procedure have already been initiated, which fully reflect the recommendations of the Venice Commission regarding the reform of the investigative system.

“The changes represent a continuation of the reform initiated by our team in the Ministry of Internal Affairs back in 2018 and aim to improve the quality of the investigation, increase the independence of the investigator and ensure the efficiency of both investigative and prosecutorial activities. These are important changes for balancing the indefinite power that has accumulated in the hands of the prosecution since 2010 for centralized management of the justice system,” claims the team of For Georgia.

The party representatives claim that given the challenges facing the country, the Platform for Democracy and the Rule of Law through thematic meetings and other formats continues to focus on the following issues: Depoliticization of the civil service; elimination of corruption and nepotism; strengthening local self-government and decentralization; ensuring the independence of the judiciary; ensuring real parliamentary oversight of the law-enforcement system; improving electoral legislation and practices (including the role of money and administrative resources in elections); protection of human rights (freedom of expression; right of assembly; freedom of the media; unlawful interference with the journalists’ professional activities; domestic violence against women; fight against discrimination; the rights of minors and persons with disabilities; women’s political participation, etc.).

For the record, the leader of the party Giorgi Gakharia resigned as PM on February 18 due to differences of opinion about the arrest of UNM Chairman Nika Melia.

However, following his resignation, the former PM announced that he was not going to leave politics. He then established a new political force ‘For Georgia.’