For Georgia, “against No-one” 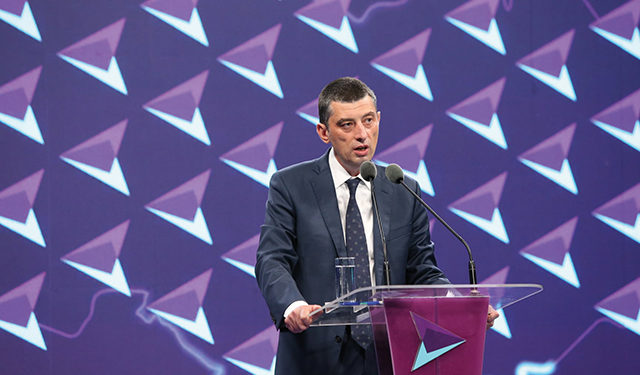 “Georgian politics looks set for its biggest shake up in a decade after former Prime Minister Giorgi Gakharia announced the launch of a new party, one that has already attracted defectors from the ruling Georgian Dream,” notes the author of the article, adding that Gakharia served as prime minister from September 2019 until February this year, when he resigned over the ruling party’s treatment of an opposition politician, Nika Melia.

“At the time, Gakharia said that he had no intention of leaving politics, and [last weekend] delivered on his word, creating a new party he says will “unite” the politically fractured country.

Regarding the rumors about Gakharia and his team being “controlled opposition” to the ruling party Georgian Dream, the author recalls that in 2017, Gakharia was made Minister of the Interior, during which time, police raided several popular nightclubs in Tbilisi in an anti-narcotics operation. However, the raids yielded much criticism from the public, widespread protests, and the ministry faced accusations that they had been politically motivated in their moves.

“In 2019, in what has become known as ‘Gavrilov’s Night,’ there were more protests after a visiting Russian MP was allowed to make a speech while seated in the chair of the Speaker of Georgia’s Parliament,” Mamo notes.

Gakharia was still interior minister at the time, and ordered the police to break up the demonstration. Police used tear gas, water cannons and rubber bullets, which Gakharia later denied permitting. At least two people experienced eye injuries and loss of vision due to the use of rubber bullets.

“However, a poll conducted by the National Democratic Institute in September 2019 found that while 43% of Georgians thought the government responsible for use of “excessive force” in the Gavrilov crackdown, only 9% blamed Gakharia personally.

“Furthermore, a poll from this February carried out by the International Republican Institute found that Gakharia was the most popular politician in the country.

“The timing of Gakharia’s formation of a new party is not a coincidence. Part of the European Council-brokered deal between the rival Georgian parties stipulates that if Georgian Dream wins less than 43% of proportional votes in this autumn’s local elections, a snap parliamentary election will be held,” Mamo writes.

“According to one Georgian newspaper, an internal survey conducted by Georgian Dream found that the ruling party, at the moment, only expects to win around 20% of the votes in the local election, well under the threshold needed to avoid a parliamentary election.

“Georgian Dream stooge or not, Gakharia looks set to be a key player in Georgian politics in the coming months,” the author concludes.

Further argument against the idea that Gakharia represents a controlled opposition is this weekend’s verbal ping-pong between Gakharia and ex-Georgian Dream Chairman, Bidzina Ivanishvili.

Billionaire Bidzina Ivanishvili issued a letter calling Giorgi Gakharia a “traitor” for resigning from his post as PM.

“I found out about deliberately spread rumors that Giorgi Gakharia’s party is my so-called ‘political project.’ Because I see an attempt to link my name to Georgian politics by the spreading of false information, despite my having left politics, I feel obliged to give a small explanation to the public on this issue,” Ivanishvili wrote.

“From 2011 until I left politics this year, I did not dare to create any pseudo-party. It is even more unlikely to dare such a thing after leaving politics. Apart from the fact that the creation of a pseudo-party is wrong in itself, political cooperation with Giorgi Gakharia would be completely unacceptable to me. During all these years, we have witnessed many political mistakes in Georgian politics, and I thought that in this respect, nothing and no-one would surprise me. However, what Giorgi Gakharia did in February of this year was surprising,” Ivanishvili wrote, claiming that Gakharia resigned for a completely “incomprehensible reason.”

“He resigned because he did not want to uphold the rule of law and enforce the law, which the whole political team called on him to do. He demanded a two-day postponement of law enforcement, about which we have not heard any convincing explanation so far.

“Gakharia’s position was all the more incomprehensible due to the fact that a few days earlier he had insisted on lifting immunity for Melia. Such an action from a high official, to the degree of misunderstanding, can hardly be found analogous even in the history of world politics.

In the letter, Ivanishvili stressed that it is important that the ruling party does not depend on individuals and that it remains strong as a united team. He further claimed that his departure from politics has put an end to the “cult of personality” in Georgia.

Giorgi Gakharia responded to Bidzina Ivanishvili’s statement, noting that no-one and nothing can stop the truth.

“Events are developing more interestingly and faster than expected,” he said. “But no-one and nothing can stop the truth. Eventually, everyone will understand this.

“Again, without gossip, we unite for Georgia, against no-one!” Gakharia posted on social media.

“We were expecting that the establishment of a political party by Giorgi Gakharia would cause anxiety on both sides of the political spectrum, although the actual scale and form exceeded all expectations,” said Kakhaber Kemoklidze, a member of the political council of ‘For Georgia.’

“On June 4, the chairman of the ruling party- not the government, nor the security service, nor the law enforcement agencies, but Irakli Kobakhidze himself, accused the former Prime Minister, and current policemen and soldiers, of acting against the state and of plotting a coup, based on information which, as he said, was provided by the United National Movement,” Kemoklidze claimed.

“Kobakhidze said that for the past four months, he has been hiding from Georgian society, including Georgian Dream voters, that a coup was supposed to take place in the country involving the country’s Prime Minister, and police and soldiers who still serve in Georgia’s defense and police forces,” Kemoklidze noted. “We think that leaving such absurd statements unanswered will further damage the state interests and the country’s international reputation. Therefore, we demand an investigation into his comments be launched immediately!

“[It seems] there is no longer a red line for the current leadership of the ruling party, as they are ready to disregard the interests of the state for the sake of retaining their power. Instead of taking care of the Georgian people, today, both sides are in opposition to Gakharia and ‘For Georgia,’ brought together by fear of our political party and the future, which led them to become so similar that the moral boundary between them has been erased!

“Despite all this, we have our agenda from which we will not deviate,” Kemoklidze said. “We announced this on the first day. We are not going to gossip about the past or unite against anyone. We will present our action plan and program in the immediate future and start direct communication with the population – which will begin in the Adjara region,” he stated.

For the record, Irakli Kobakhidze, Chairman of the Georgian Dream, told Rustavi 2 on June 4 that the opposition party had planned to form an alternative government before the arrest of Nika Melia, the Chairman of the United National Movement. As Kobakhidze claimed, the ruling party had this information but didn’t confide it to the then Prime Minister Giorgi Gakharia, since they had suspicions about him.
Gakharia resigned as PM on February 18 due to differences of opinion about the arrest of Nika Melia.

However, following his resignation, the former PM announced that he was not going to leave politics. He recently established a new political force ‘For Georgia.’