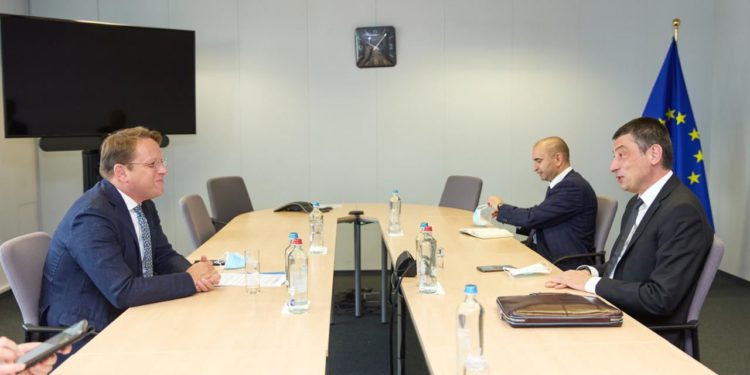 On June 15, Former Prime Minister Giorgi Gakharia, who now chairs political party For Georgia, left for Brussels along with a member of the Political Council of the same political party, Kakhaber Kemoklidze, to hold high-level working meetings with Western partners.

Georgia’s Euro-Atlantic aspirations and political plans of ‘For Georgia,’ along with the country’s upcoming local self-government elections, were discussed during the meetings with members of the European Parliament, representatives of the European External Action Service (EEAS), Office of the President of the European Council, and the North Atlantic Treaty Organization (NATO).

At the beginning of his visit to Brussels, on June 16, Gakharia met with the MEP Marina Kaljurand.

The importance of Georgia’s EU integration was emphasized at the meeting.

MEP Marina Kaljurand has tweeted after the meeting:

“Always good to hear first hand from different parties about political situation and aspirations in Georgia. Thank you, Giorgi Gakharia, for today’s meeting.”

We had a fruitful meeting with @MarinaKaljurand , the true friend of Georgia. We discussed a range of topics, including the importance of Georgia's EU integration process and the plan of #ForGeorgia for the upcoming local self-government elections. pic.twitter.com/iPgWVAmb4h

In turn, the former PM assessed the meeting as “fruitful.”

Following the meeting with Marina Kaljurand, the representatives of ‘For Georgia’ met with the Managing Director for Russia, Eastern Partnership, Central Asia, Regional Cooperation and the OSCE of the EEAS, Michael Siebert.

At the meeting, challenges facing Georgia internally and externally, as well as the country’s prospects for  EU integration and its practical instruments were discussed.

During the meeting with Michael Siebert, Giorgi Gakharia spoke about political plans of ‘For Georgia’ political party. In addition, Georgia’s upcoming local self-government elections were discussed.

“We had a productive meeting with Mr. Michael Siebert, Managing Director for Russia, Eastern Partnership, Central Asia, Regional Cooperation, and the OSCE of the EEAS. We discussed the security challenges facing Georgia, the political processes, and the plans of For Georgia,” Gakharia tweeted after the meeting.

We had a productive meeting with Mr. Michael Siebert, Managing Director for Russia, Eastern Partnership, Central Asia, Regional Cooperation, and the OSCE of the EEAS. We discussed the security challenges facing Georgia, the political processes, and the plans of #ForGeorgia. pic.twitter.com/DD9qwJ5CHW

Meetings with the members of the European Parliament, Andrius Kubilius, Sven Mikser and Rasa Juknevičienė were held in the format of the working lunch.

During these meetings Georgia’s aspirations for EU membership were discussed, including prospects for further deepening Georgia’s economic and political cooperation with the EU.

At the meeting with members of the European Parliament, Giorgi Gakharia discussed upcoming local self-government elections, planned to be held in 2021. He also shared with them information about his political plans.

The main topic of the meeting was the transition to the stage of practical implementation of the issues identified and agreed upon during the time when Gakharia served as PM. These include specific plans for physical communication and transport links with the EU, strengthening of economic cooperation mechanisms and their practical implementation. In this context, the parties noted the progress made so far and the concrete steps that need to be taken in the future. Giorgi Gakharia spoke in detail about the whole chain of reforms already developed by the party ‘For Georgia’ and the agenda of these reforms, which is critical for the gradual institutional integration into the European Union.

The important role of Georgia in the wider Black Sea region was emphasized at the meeting.

Gakharia briefed the European Commissioner on the strategic goals of the newly established party ‘For Georgia’ and the plans for the upcoming municipal elections. During the meeting, the need to strengthen the process of strong institutional democratization in Georgia and future cooperation in this regard was emphasized.

The parties also expressed hope for future cooperation, including another meeting in the near future.

It was great to meet and talk with a great friend of #Georgia James Appathurai, #NATO Secretary General’s Special Representative for the #Caucasus and Central Asia. We discussed the security environment and current challenges facing Georgia. pic.twitter.com/G94qFngJRA

For the record, the ruling Georgian Dream party accuses Gakharia of planning an alleged coup in February together with UNM. ‘For Georgia’ party demands an immediate investigation into these allegations and comments voiced by the current Chairman of the Ruling Party, Irakli Kobakhidze.

In particular, Kobakhidze said that the opposition party had planned to form an alternative government before the arrest of Nika Melia, the chairman of the United National Movement. As Kobakhidze claimed, the ruling party had this information but didn’t confide it to the then Prime Minister Giorgi Gakharia, since they had suspicions about him.

Bidzina Ivanishvili, the former chairman of the Georgian Dream, called the former prime minister a “traitor” for resigning. Ivanishvili noted that Gakharia resigned for a completely “incomprehensible reason.”

The former PM responded to these allegations with a short comment, noting that “no-one and nothing can stop the truth.”

“Events are developing more interestingly and faster than expected,” he said.

“No-one and nothing can stop the truth. Eventually, everyone will understand this.

“Again without gossip, we unite for Georgia, against no-one!,” Gakharia posted on social media.