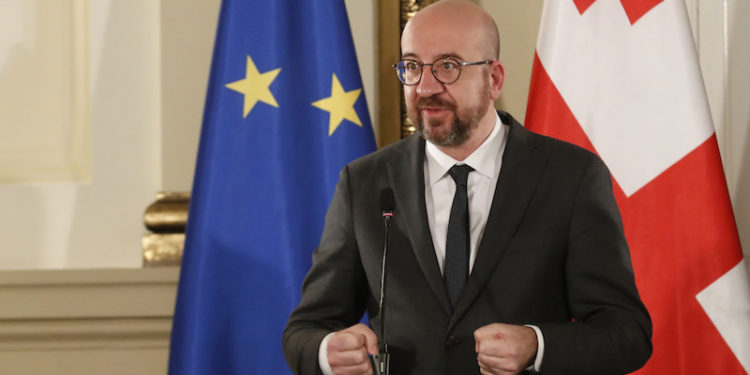 President of the European Council Charles Michel made a new detailed proposal for a way ahead for Georgia, to the representatives of Georgian political parties.

The proposal is as follows:

“A way ahead for Georgia

We, the undersigned parties, taking into account our shared interest to:

End the current political dispute and advance Georgia’s democratic and rule of law agenda through political, judicial and anti-corruption reforms,

Enable our country to stay strong and united in meeting the health and economic challenges posed by the COVID-19 pandemic, Ensure Georgia’s security and stability interests in the midst of regional challenges,

Recognizing the support from President of the European Council Charles Michel,

to enter Parliament and to fully participate in parliamentary business upon signing this agreement;

to conduct our duties until the next parliamentary elections with mutual respect and in recognition of the importance of unity in the interest of Georgia’s stability.

Therefore, we commit to fulfill expeditiously and in good faith all of the following elements:

Parliament shall adopt ambitious judicial reform in this Parliamentary term, including the following, as the first step in a broad, inclusive and cross-party reform process.

Timeline: Within one week of signature: start the process to define more power sharing in the Parliament with the changes to take effect upon convening of the autumn session of 2021.

Following the offer made by Georgian Dream on 16 April 2021, early parliamentary elections shall be called in 2022 if the Georgian Dream party receives less than 43% of valid proportional votes in the October 2021 local self-government elections.

The parties take note of the assessment by the OSCE ODIHR, according to which “the 31 October parliamentary elections were competitive and, overall, fundamental freedoms were respected. Nevertheless, pervasive allegations of pressure on voters and blurring of the line between the ruling party and the state reduced public confidence in some aspects of the process. (…) The systemic rejection of the majority of complaints on formalistic grounds, significantly limited the opportunity to seek effective legal remedy.”

The parties acknowledge their differing assessment of the 2020 elections and agree to take up their parliamentary mandates and participate in future elections on the basis of the electoral reform agreed here above, in the interest of Georgia’s political stability and in order to implement this agreement.

An International Observation Mission shall be requested by the Georgian authorities for the October 2021 local elections.

Timeline: This political commitment is made upon the signature of the agreement.”

The meeting between the government and the opposition where the new proposal should have been presented was scheduled for yesterday evening. However, the ruling team members didn’t attend it, for which the opposition criticized them, claiming that the absence of government officials at the meeting was an incomprehensible behavior and disrespect for voters and mediators.

Currently, both sides are discussing whether to sign the new proposal or not. Supposedly, the ruling team will not sign the document. They note that the ‘Georgian Dream’ has already signed the previous proposal made by Charles Michel, while in the new proposal, there are certain points “that are unacceptable to them.”

Related Story: EU, the US Call on MPs to Sign Agreement Proposed by Charles Michel