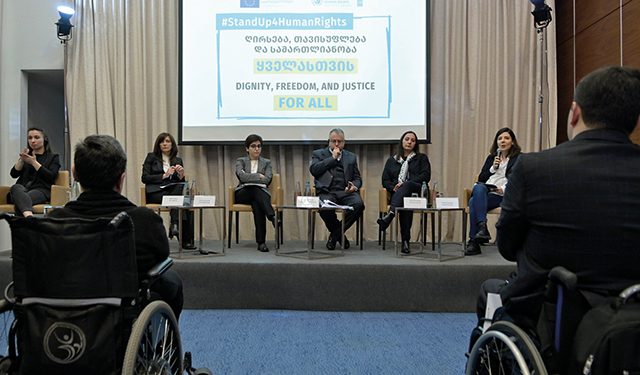 As Georgia gets ready to adopt its National Human Rights Strategy for 2023-2030, the European Union, the United Nations Development Program (UNDP) and the UN High Commissioner for Human Rights (OHCHR) are creating a space for discussion on ongoing reforms on administrative offences regulatory framework and the effective realization of economic, social and cultural rights, bringing together decision-makers, civil society, and human rights defenders.

The conference “Stand up for Dignity, Freedom and Justice for All” this week echoed the Human Rights Day theme and called on the government, parliament, civil society organizations and communities to work together and seek solutions to the challenges that prevent Georgia’s citizens, especially representatives of vulnerable communities and minority groups, from fully enjoying their constitutionally guaranteed rights.

Mikheil Sarjveladze, Chairperson of the Parliamentary Committee for Human Rights and Civil Integration; and Niko Tatulashvili, Advisor to the Prime Minister of Georgia on Human Rights Issues, opened the conference.

“The EU supports a constructive discussion on human rights between decision-makers and civil society. The new National Human Rights Strategy and the follow-up Action Plan should encompass the rights of all social groups, including the vulnerable and marginalized communities, and come up with solutions to address the challenges linked to discrimination and exclusion in Georgia,” said Catalin Gherman, Acting Head of Cooperation at the Delegation of the European Union to Georgia.

“We bring economic, social and cultural rights to the center of the discussion on human rights challenges faced by minority groups, especially the most vulnerable, such as the national and religious minorities and the LGBTQI+ community. The conference will help produce policy reforms and practical measures to support Georgia’s progress toward an equal, just and fair society,” said Nick Beresford, UNDP Resident Representative in Georgia.

“Whenever and wherever humanity’s values are abandoned, we all are at greater risk. The solutions to today’s greatest crises are rooted in human rights. Thus, it is a primary obligation of officials in all states, including Georgian authorities, to respect the rights and dignity of all individuals regardless of their race, color, ethnicity, religion, sexual orientation, gender, disability, age or other grounds. Stigmas and deep-rooted stereotypes should not have room in contemporary Georgia,“ said Vladimir Shkolnikov, Senior Human Rights Advisor for the OHCHR’s South Caucasus Office.

The conference was part of the Human Rights Week which kickstarted a year-long campaign acknowledging and promoting the 75th anniversary of the Universal Declaration of Human Rights. The campaign has reached out to wide circles of Georgia’s society, bringing together an array of partners and supporters, including the government, parliament, civil society, the private sector, community organizations, international agencies and diplomatic missions.

* * *
“Human Rights for All” is a $3 million EU-funded initiative supporting Georgia to promote respect for human rights, strengthen human rights protection in all areas of life, and address the remaining issues of concern. The initiative is implemented by the two UN agencies – UNDP and OHCHR, in close collaboration with national partners and stakeholders.

Tags: Delegation of the European Union to GeorgiaHuman Rights for All’OHCHRUNDP
ShareShareTweet