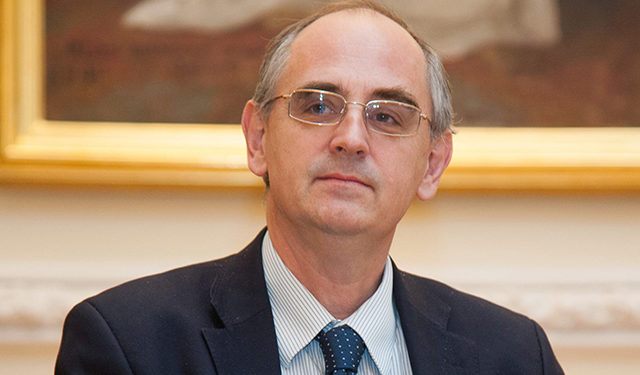 Putin’s like a pianist staring at a keyboard and thinking what to play. What we should be doing is taking the keyboard away from him, rather than waiting to see what tune he chooses

The fears in the West can probably be summed up in the statement of the Polish Co-Chair at OSCE’s last meeting: “This is the closest we’ve been to war with Russia in the last 30 years”. It is a sentiment that resonates with British journalist, author and analyst Edward Lucas, who spoke to RFE/RL to offer his insights on the ongoing West-Russia standoff and looming war in Ukraine.

“In the end, I feel very angry and disappointed that my warnings over the last 15 years have not been listened to,” Lucas says. “Not just me, but people from the Baltic States and from other countries in the region have been complaining since the 1990s that Russia was going in the wrong direction. Nobody listened, and now we face a really serious European security crisis and the possibility of war.”

Why do you think it took so long for the West to wake up?
The question is – Have they really woken up yet? There’s an idea that it’s all the result of NATO expansion or a failure to have a working dialogue with Russia. I think at least half the West is still asleep. We already have 14,000 Ukrainians dead because of the West’s complacency, naivety and greed. And I’ve a fear that that that number is going to go up.

Please elaborate in what aspect the West was naïve toward Russia.
We assumed that the old Cold War was completely over and there wouldn’t be a new one. And we didn’t understand that a Chekist is still a Chekist, even if he doesn’t have a hammer and sickle on his shoulder. And so that was a serious, serious mistake. And we didn’t understand that Russian Imperialism is still Russian Imperialism, even if Russia is weak. So that was the naiveté. And the complacency was that we said “yes, there is a problem, but we can deal with it. We just need a bit more dialogue, maybe slower expansion of NATO in Eastern Europe, but there’s nothing serious.” The greed was that we thought we could continue to make money out of it. That, in a way, is the worst thing we did. Lenin said “When it comes time to hang the capitalists, they will vie with each other for the rope contract.” And Vladimir Putin has put that into practice: He’s given us a great deal of rope, and we’ve tied a very effective knot.

The “let’s have dialogue with Russia” motto that so many Western leaders are still keen on – what would be results of such a dialogue?
I’m very much in favor of dialogue and of negotiations, but you have to have your own objectives very clear and know what it is you’re willing to concede and what it is you’re not willing to concede. If a mafiosi comes knocking on your door and says, “I want you to give me your business,” the response should not be “Okay, let’s negotiate.” You should say, “I’m calling the police.” And this is this is what we failed to do. We should treat Vladimir Putin like a Tony Soprano from The Sopranos series – I found that series to be a very useful guide to Russian thinking, because the product is really very similar to Vladimir Putin.

News is that the UK just provided Ukraine with anti-tank weapons. What is the UK stake in this confrontation and the extent of its involvement?
The UK takes the Russian threat seriously, and supporting Ukraine is one of the principles of our strategy. I’m pleased about this. We’ve done quite a lot and I wish we’d done it earlier, but what we need is all European countries doing this. And I would like to see, in an ideal world, Mr. Scholz, the German Chancellor, together with President Macron, declare “we are on the side of Ukrainians, and we are not going to allow them to be intimidated, we’re not going to allow any divide and rule game played in Europe,” and so on and so forth. But I fear it’s just wishful thinking on my part. If anything, the German government is pursuing the opposite approach of saying “we won’t send any weapons because we don’t want to escalate the situation.” But of course, by doing that, they actually guarantee that things will get worse.

There was news that Canada also deployed a small contingent of special forces operators to Ukraine. Is this a sign that there is more to come both from the UK and Canada?
No disrespect to Canada, but I don’t think Putin will say, Oh, my goodness, the Canadians are coming, we have to change our plans! What we need is a major, immediate NATO reinforcement of the Baltic states, a snap NATO exercise, to show that NATO is ready to defend its members. We need strong bilateral support for Ukraine. And I would say the EU should accelerate its talks with Ukraine for Ukrainian membership. If I was running the EU, I would hold an emergency meeting of the European Council and issue a major political declaration saying we want Ukraine in the European Union as soon as possible, and I’d really speed up negotiations to send a signal to Putin that everything he does is counterproductive; that if you try and pull Ukraine away from the West, the West responds appropriately. But as I say, this is merely what I think should happen, not what I think will happen.

Last week, the West rebuffed Russia’s “security demands” in no uncertain language. Yet, now FM Lavrov claims that they are expecting a written response from Washington and NATO. To what end?
The reason Russia gets to send those demands in the first place is that NATO has not issued or made that long overdue Membership Action Plan for Ukraine, instead accommodating Russia’s vision that its security depends on its neighbors’ insecurity. As to what end, there are two possibilities. One is there’ll be something on the paper which Russia will package as a victory. And the other is that Russia will say, “Behold! This is a Western ultimatum and gives us no choice but to respond with force!” Putin doesn’t really mind the difference between “Pravda” and “Istina”, as long as he can twist the former to sell as the latter to Russians.

If this scenario were to materialize, where does it make most sense for Russia to strike – what would be the priority targets?
There are many options, and one possibility is they do something less that we fear. And then we would be so grateful that they haven’t done what we really fear, that we don’t mind what they’ve actually done- for example, some new arrangement in Belarus which will be very threatening for Ukraine and turn Belarus into an extension of the Russian Federation, at least in military terms. That could be one would-be result, at which many in the West would say “thank goodness, we didn’t get a war.” Or Russia might try and secure the water supply in Crimea, which would be a major benefit for them if they can get hold of that canal. Or they might try and do something in the Sea of Azov or try and take Mariupol. They might end up formally incorporating the DNR and LNR into the Russian Federation. Putin’s got the initiative, he can choose. He’s like a pianist staring at a keyboard and thinking what to play. What we should be doing is taking the keyboard away from him, rather than waiting to see what tune he chooses.

The West is threatening “unprecedented” sanctions. How “unprecedented” do they need to be to actually make Putin change his mind?
I don’t think it should be just about sanctions, but about showing that we’re willing to defend ourselves: The of accelerating Ukraine’s accession to the EU, a big military reinforcement to the Baltic region, something in the Black Sea, and bilateral military assistance to Ukraine. And I’d also suggest that we make a very speedy offer to Finland and Sweden to get into NATO. Sanctions against Russia are okay, up to a point, but in the end, I don’t think they’re decisive. We could have an embargo, refuse to buy Russian oil, gas or coal, but that’s difficult. There’s not much political appetite for that, because Europe is very short of gas already.

You mentioned the EU should be putting forward membership access to Ukraine, while NATO should provide a MAP to Kyiv. Where does all this leave Georgia?
I think Georgia is in a very difficult position, that it’s lost its reputation as an outpost of democracy, rule of law, media freedom and so on in the Caucasus, and there’s been a lot of very justified concern about the way things have been going in recent years. So, I think that Georgia’s gone down the agenda. And I feel very sorry: Georgia hasn’t gone down my agenda; I have many Georgian friends, and I care very much about what’s happening there. But I think that the internal situation is not helping the country’s foreign policy, and when we talk about NATO and EU hopes, I think the danger is that Georgia is less of a priority than before. Many people in the West might say that Georgia has already for a long time been under Russian influence and it hasn’t got either the symbolic nor the strategic importance it once had, but I don’t want to talk down Georgia’s chances. I would certainly campaign very hard for Georgia to be treated as a case.

To put it crudely, Georgia’s got to get its act together- I’m not sure that Mr. Ivanishvili and the Georgian Dream party fully realize the serious harm the damage to their reputation and these political shenanigans we’ve been seeing have been doing to the country’s reputation. A major overhaul would be needed for Georgia to be taken seriously.

Interview by Vazha Tavberidze for RFE/RL