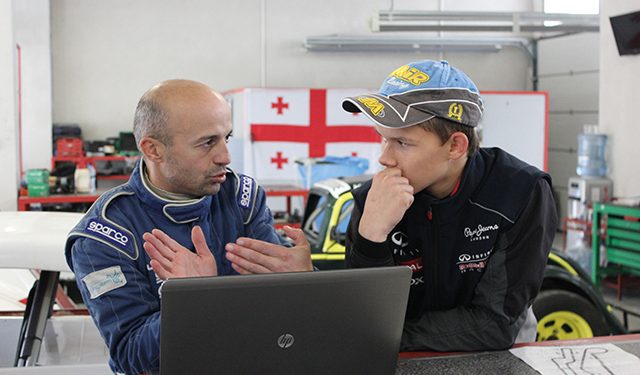 The 140-decibels howls and screeches from smoking tires as the custom-built racing cars gyrate and skid around the track is what first strikes spectators. Then comes the size and age of the crowds – thousands of (mostly young) petrol-heads. This is drifting, Georgia’s fastest growing sport.

In the next few years, millions of Lari will be spent building dedicated circuits of international standard across the country to add to the brand-new arena at Lilo and the established facilities at Rustavi.

But drifting is becoming more than a sport in Georgia; it is a burgeoning consumer industry with accumulating ancillary activities. Put together those watching the drivers at the tracks plus the followers on social media, according to Sandro Lomadze, President of the Georgian Automobile Sport Federation (GASF) and a racing driver himself, and you can get up to a million fans.

“Our plan is to expand the motorsport infrastructure in Georgia and build four compact racetracks which can be used for Drift, Rally Cross and Kart,” Lomadze says. Following on from the Lilo Arena plans is one in Kutaisi, for which talks with investors have already started, and then Kakheti and Adjara.

While there are official drift races at the Rustavi International Motorpark, it does not have a dedicated drift track. At Lilo Arena (on a site near the Kakheti side of the market), Tbilisi City Hall has allocated over nine hectares for the construction of a multi-functional motor complex, including a drifting circuit that is sophisticated enough to host international drift competitions. A formal grand opening is planned for September, although the main track is finished and races have already started.

Official backing has come, as the aim of the project is not only for professional racing, but to help move reckless amateur street-racing to a safe and organized space and provide driving training. The sport and its major players are big public advocates of safe driving and backers of road safety initiatives. Racing already gets support from the government in the form of tax exemption for racing cars, and the municipality was happy last year for Tbilisi to host an international drift race through its streets, though Covid-19 complications led to its cancellation.

The first stage of Lilo completed, next will come an off-road track and a children’s off-road zone along with training areas, other motor-related activities, catering, and the necessary parking. The cost of the whole project is put at around $5 million, and the time period estimated for completion is around five years.

Georgia’s most famous drift driver, multi-time champion and vice-president of the GASF, Mevlud Meladze, who devised the idea for the Lilo complex, announced to journalists last year that the 2023 European Drifting Championships will be held at Lilo Arena. Its architecture contains ideas from top tracks around the world, with state-of-the-art design incorporating difficult corners, jump sections, and flat-out layouts.

As Lomadze notes, this layout “gives us the opportunity to bring into Georgia international competition series in 2023-24, such as the Drift Masters European Championship, the FIA International Drift Championship, and the FIA RX World Championship.”

The FIA is the Fédération Internationale de l’Automobile, the governing body of much motor racing, including Formula 1. Along with that comes the payoffs for Georgia of badly needed upmarket tourists, drift car manufacturing, and export opportunities, as well as a higher country profile.

Drifting defined
So, what is drifting? As described by drifting journals and websites, it is a driving style in which the driver uses the throttle, brakes, clutch, gear shifting, and steering input to keep the car in a state of oversteer while manoeuvring from turn to turn. Drifters emphasize car control by coordinating the amount of counter-steer (or opposite lock) with the simultaneous modulation of the throttle and brakes to shift the weight balance of the car back and forth through the turns. Also, they strive to achieve this while adhering to the standard racing lines (or designated “clipping points” if drifting in competition) and maintaining extreme slip angles. Aficionados say it is the most difficult, demanding, and exciting way to drive a car on a track.

Competitors in races must complete a pre-defined course and are judged on how close they get to “clipping points”, as well as their car’s set up, speed (faster is better and time is irrelevant), driving strategy, and style. Following individual runs, winning drivers are paired against each other for twin battles, the aim being for the chase driver to follow the lead driver as closely as possible – the high point of the meetings as cars speed at 160 km/hour-plus while just 10 – 15 cm from each other. The essence is superb control and for spectators, loads of adrenaline rush!

Tbilisi City Hall has allocated over nine hectares for the construction of a multi-functional motor complex, including a drifting circuit that is sophisticated enough to host international drift competitions

Drifting, which began as informal racing in the 1970s on the twisting mountain roads of Japan, gave drivers ample scope to refine new control techniques. When drifting first took off, it was hardly legal and very much underground, which added to the excitement generated. It gained even more popularity after the release of the 1995 manga series Initial D, which highlighted the world of illegal Japanese street racing first in magazines and then on TV and films. It is now an accepted part of the world motor racing scene, with both professional and amateur drivers (female as well as male) competing.

Japan retains a strong influence, with Japanese cars dominating. Drift cars are usually light-to moderate-weight rear-wheel-drive coupes and sedans offering a wide range of power levels, and internationally, drifters use local versions of the most popular cars. The main modifications are to the drivetrains, clutches, gears, brakes, steering and suspension; a racing seat and five-point harness are also installed. Tires typically used by drifters are around the DOT tread wear of 200, which makes them one of the greatest expenses for racers.

Sponsors are a diverse bunch globally and range from tire and car manufacturers and petrol companies to alcohol and soft drink firms (the Red Bull energy drink company sweeps the field with heavy international sponsorship). In Georgia, as can be seen from the logos on social media and the cars around the tracks, similar types of companies are backers here, too, with SOCAR being a major sponsor and Wissol also backing championships. Tire companies are also among the sponsors, as is the microfinance group Euro Credit. SOCAR and Euro Credit, among others, sponsor whole teams.

“For many years, the leading product and major industry direction of the company has been auto loans and finances, and we have a very good understanding in this field. The number of people interested in motorsport is increasing daily”, Euro Credit’s Mikhail Nonikashvili told BM.ge last autumn. As proof, he pointed to the FIA Rally Star Georgia’s qualifying round, which was held in four parts, each of which drew 100 drivers.

What woke Georgia’s petrolheads up to the delights of official drifting (as opposed to the nation’s widespread amateur efforts on wet, windy and mountain roads) was the coverage this century in international films, ads, and social media. It is a very showy sport. As online magazine grassrootsmotorsport.com comments: “Drifting is seen as an adrenalized expressway to the youth market, and its brink-of-control drama made for terrific photo stills and video to spice up any advertisement.”

Georgian racers welcome international interest
There are, says Sandro Lomadze, 69 professional racers registered in Georgia and 130 amateurs (male and female). Leading personalities include, as well as Mevlud, Nodar Kodua and Vakho Khurtsidze.
Mevlud, now 50 and still racing internationally, has long been a promoter of motorsports, after spending his early years winning international prizes competing in martial arts. It was his success in international drifting competitions in recent years that has helped put Georgia on the map of world drifting, says Lomadze. However, Mevlud has also made a very public point of campaigning for road safety and works as a driving instructor and advisor to, among others, the Ministry of Internal Affairs and its police academy.

Two other highly successful, younger drivers who are winning through to international competitions include his former pupil Nodar Kodua (24) and, a few years older, Vakho Khurtsidze.

Georgia’s vibrant drifting scene and low costs have attracted not just international spectators, but those seeking racing training as well as foreign buyers for modified cars. One of the ways professional drivers support themselves is to modify and sell cars to foreign enthusiasts. Latvian racers are regular buyers as drifting is highly popular there, but engineering work to modify cars in the Latvian market costs considerably more. Though, one of the appeals of the sport is that it is just as possible to compete with a $10,000 car as it is with a $200,000 one.

The lifestyle of a professional drift driver is expensive, and not for sybaritic reasons: the bills for car modification and especially for tires are steep. As Irakli Pipia (31), one of the successful professional drivers, says: “…owners of racing cars spend $50,000-100,000 during the racing season.” So, not only do the professionals have to run a second career to support themselves, but they also need sponsors. Pipia trains new drivers, sells drift cars, and helps to manage a 20-hectare vineyard. And for those entering international competitions, the costs are even higher – hence the value of government help.

Unsurprisingly, he welcomed the plans for the new arenas which, by attracting greater crowds along with a rising number of amateurs and professions drivers, will “… make this sport more interesting for companies and encourage them to sponsor more drivers than they are doing today.”

A drifter since his early teens, Irakli is fervent about the attractions of the sport: “To understand why people like drifting, you must visit an event and feel that energy and atmosphere, see how two cars are drifting (dancing) and touching each other – you will remember that all your life.”