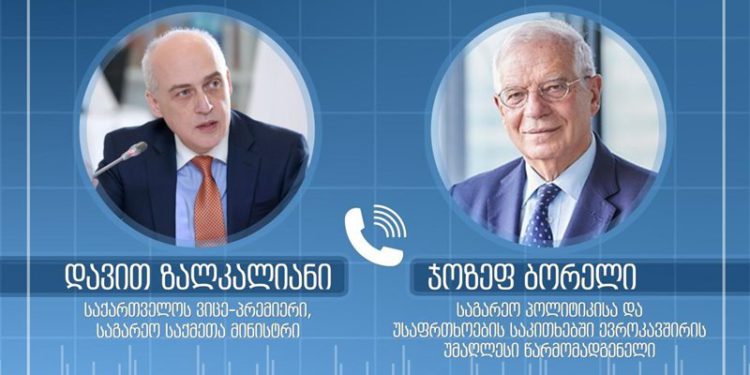 Ministry of Foreign Affairs of Georgia has reported the Vice Prime Minister/Foreign Minister of Georgia, David Zalkaliani held a telephone conversation with the High Representative of the European Union for Foreign Affairs and Security Policy, Josep Borrell.

During the telephone conversation, the European Union’s strong and unwavering support for Georgia was reaffirmed. The sides highlighted the special attention the European Union and its Member States pay to their partner – Georgia, especially in the light of the ongoing military aggression in Ukraine.

The sides expressed concern over the ongoing developments in Ukraine. The High Representative shared with the Foreign Minister the information on measures taken by the EU in response to Russia’s violation of the principles of international law. It was highlighted that Georgia aligns itself with the political statements of the EU and international organizations regarding the situation in Ukraine. The sides stressed the urgent need to immediately end the armed conflict in Ukraine and to use all international mechanisms to this end.

The sides recalled Russia’s military intervention into Georgia in 2008 and the harsh effects of occupation and the difficult humanitarian and security environment on the ground, which Georgia is still struggling to cope with.