David McAllister: When We Talk About Georgia, Sadly, We Always Remember One Word – Polarization 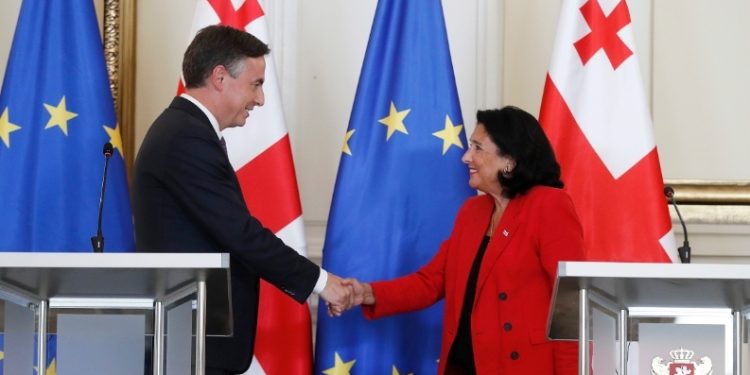 “When we talk about Georgia, unfortunately, we always remember one word, that is – polarization,” David McAllister, Chairman of the European Parliament’s Committee on Foreign Affairs, said at the briefing after meeting with President Salome Zurabishvili.

He noted that Georgia must address certain priorities in order to receive candidate status.

“The visit to Georgia is one of the parts of our mission in the South Caucasus. We will meet with representatives of the Parliament and Government of Georgia, representatives of the Georgian Dream and the opposition. Of course, we will mainly talk about Georgia’s application for EU membership. I want to tell you that last month’s decision of the European Council was a truly historic decision. It was announced that Georgia was given a European perspective.

“This is a recognition that the European Parliament supports the Georgian people and is ready to bring Georgia closer to the European Union, as it is a member of the European Union family. However, we believe that Georgia should address certain priorities in order to receive candidate status. These priorities were very clearly outlined in the opinion of the European Commission. We talked with Madam Zurabishvili about how important it is for all political forces to unite, put aside their differences, talk constructively and work to achieve one goal – to receive candidate status for European membership. Unfortunately, when we talk about Georgia, we always remember one word, that is – polarization, and it’s a process, a political discourse characterized by very harsh rhetoric and inability or unwillingness for people, opposing political parties, to work together. The European Union has always called on the conflicting parties to somehow reach an agreement on the basic reforms, development of democracy and strengthening of the rule of law, which are so important for Georgia. Charles Michel is also involved in this process and this shows the great support that Georgia has from the European Council.

“Madam President, you also made very important statements and called on all parties to unite, which is very important in Georgia at this stage. We are very encouraged by the fact that serious efforts are being made regarding the 12-point plan. The ruling party, the opposition and civil organizations have presented their plans, which proves that the candidate status is a goal shared by all,” said David McAllister.

The delegation of the European Parliament’s Committee on Foreign Affairs is visiting Georgia. Members of the delegation started their meetings in Tbilisi today.