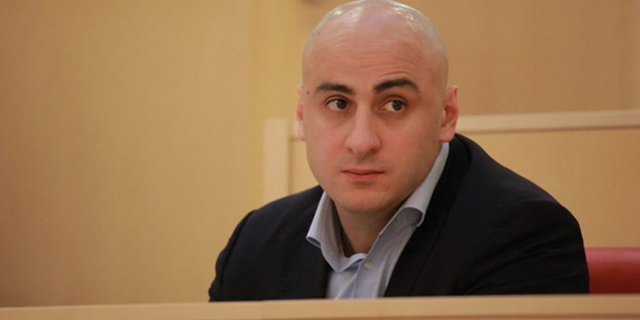 “The bail, as a measure of restraint, should be replaced by detention. – Judge Nino Chakhnashvili

Tbilisi City Court on Wednesday satisfied a motion of the Prosecutor’s Office and ruled to use the pre-trial detention measure against Nika Melia, Chairman of the opposition United National Movement party.
“The bail, as a measure of restraint, should be replaced by a more severe measure of restraint – detention. Defendant Nikanor Melia should start counting the period of detention from the moment of actual detention,” Judge Nino Chakhnashvili said when announcing the verdict.

With this decision, Chakhnashvili fully satisfied the motion of the General Prosecutor’s Office of Georgia.
The trial of Nika Melia lasted six hours on Wednesday, as the court discussed the revision of the measure of restraint against him. The accused himself was not present at the trial, as a form of protest and distrust toward the court.

The Prosecutor’s Office applied to Tbilisi City Court with a motion to change the measure of restraint after the parliamentary majority supported the investigative agency’s motion to detain the opposition leader, with 88 votes in favor and two against.

Melia is to be arrested for refusing to pay the 40,000 GEL bail set last year. He was charged with incitement of violence during the June protests back in 2019, and was released on bail in November. He should have paid the bail by December 24, 2020, but did not.

“Do not make me come to Parliament, Aleko. I will take you out of there with my own hands!” Melia responded this week to MP Aleko Elisashvili’s offer to transfer his salary to him so he can pay his bail. Melia said he does not need anyone to pay the bail, and that whoever paid the bail in his place would be “an agent of the SUS [State Security Service] and a supporter of Gavrilov.”

On an earlier court decision, Nika Melia also had to wear a monitoring bracelet, which he removed publicly during the street protests. With reference to this move, on 3 November 2020, the Prosecutor’s Office applied to Tbilisi City Court, requesting an aggravation to the already existing injunction on Melia.

“Melia demonstratively took off the electronic monitoring device while making a public statement at the opposition rally protesting the Central Election Commission’s announcement of the preliminary voting results for the parliamentary elections. This deliberate act was a clear violation of the injunction imposed on him, and creates legal grounds for immediate prosecution,” the investigative agency said at the time.

On Wednesday evening, the US Embassy to Georgia issued a statement calling for calm: “We call on the authorities and the opposition to exercise maximum restraint in the wake of tonight’s ruling. Violence serves no-one except those who want to undermine Georgia’s stability. This must be resolved peacefully.”

In response to his disagreeing with his team’s opinion regarding the Melia case, Prime Minister Giorgi Gakharia on Thursday morning announced his resignation.

“Unfortunately, I could not reach a joint opinion with my team on this issue, so I decided to resign. I want to believe that this step will help reduce polarization in the political sphere, because I am convinced that polarization and confrontation between us is the biggest risk for the future of our country,” he said.
In response to the PM’s resignation, the MIA temporarily postponed the planned detention of Melia.

“With the resignation of the Prime Minister, the Minister of Internal Affairs made a completely logical decision to temporarily postpone the arrest of Nikanor Melia,” said Chairman of the Georgian Dream party, Irakli Kobakhidze.

He added that “A country where law enforcement is not ensured, cannot establish itself as a state,” and warned Melia to obey the law, “Otherwise, the government will apply law enforcement and make the arrest.”