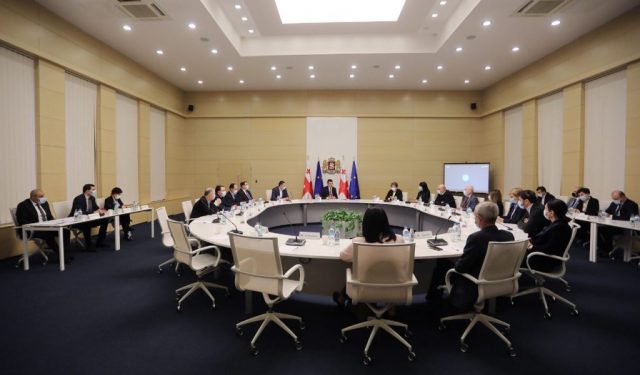 The current epidemic situation, the new confirmed strain of COVID-19, intensive testing and preparation for the vaccination stage were discussed by the Inter-Agency Coordination Council led by Giorgi Gakharia, Prime Minister of Georgia at its regular meeting held today at the Government Administration.

Detailed discussions were held at the Council Meeting on the current epidemic situation in the country. It was noted that volume testing was small in recent days. Detection of new cases was also minor and thus 2 316 confirmations today are related to people contracting the virus prior to the last 3 days.

A new strain of COVID-19 was also discussed. One case has been confirmed so far in Georgia. It was noted that its clinical performance is similar to the previously known strain, though the community transfer rate of this one is relatively faster and more caution is required on the grounds of information available at this stage.

Performance of the intensive testing as a process was also discussed by the Council, including the additional steps taken for the extension of scope and coverage of systemic target groups to make sure that the process becomes more effective.

Steps made by the Specialized Task Force established with the instructions of the Prime Minister of Georgia for the uninterrupted flow of the COVID vaccination process in the country have been discussed at the meeting today as well. It was noted that the Ministry of Foreign Affairs and overseas diplomatic missions of Georgia are engaged in the negotiations held on behalf of the State with international partners and pharmaceutical companies to make sure that first dozes of the COVID vaccine reach the country as early as possible.

It was once again noted that effective enforcement of the imposed restrictions is required, along with all the recommendations that need to be adhered. They include the social distancing and uniform wearing of face masks.

Since the detection of the first case of COVID-19 in Georgia, 232 079 individuals have been proven positive through lab testing, out of which 222 787 individuals recovered and 2 646 died.

Currently, 377 individuals are placed in quarantine, 763 – at clinical hotels and 4 012 – at hospitals under medical supervision.

The Inter-Agency Coordination Council led by the Prime Minister of Georgia actively engages the Parliament of Georgia chaired by MP Archil Talakvadze and the Administration of the President of Georgia.